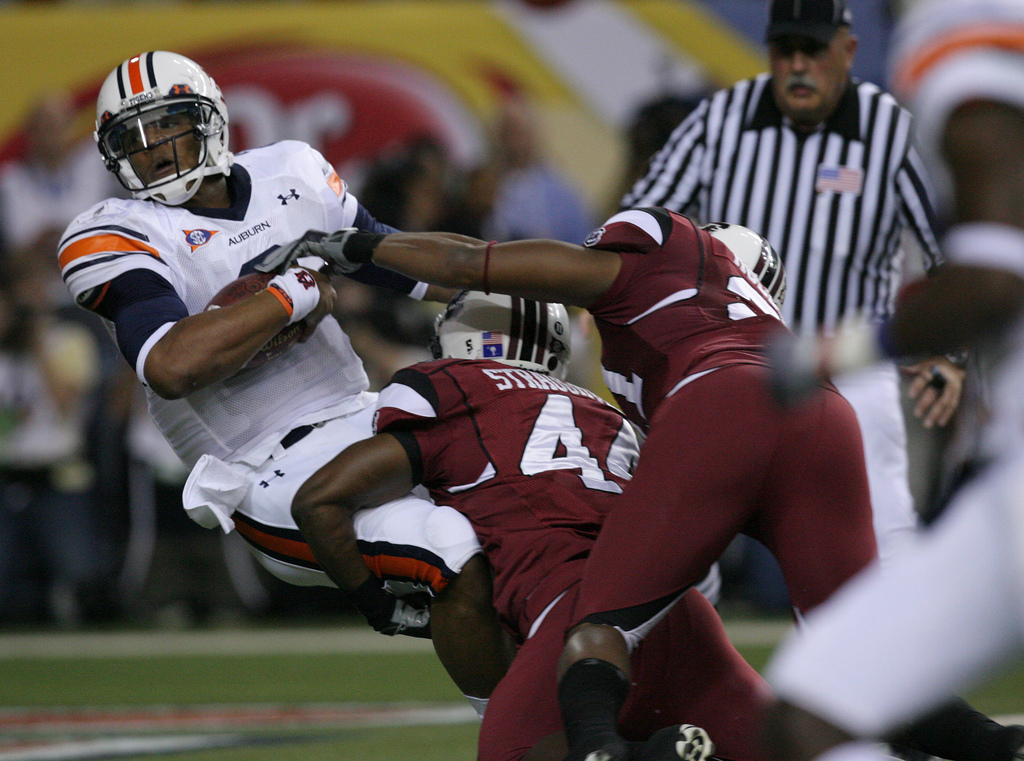 By FITSNEWS || Former Auburn University quarterback Cam Newton has already been at the heart of one alleged “pay-to-play” scandal … in which his father Cecil Newton was accused of attempting to solicit a six-figure payment in exchange for his son’s college commitment.

But is there another another “(s)Cam” scandal in the works?  One that revolves around the coveted collegiate honor he was awarded after accounting for fifty-one total touchdowns and 4,369 total yards during his one season in Auburn?

Former University of South Carolina quarterback Stephen Garcia made big news this week when he alleged numerous Southeastern Conference football players were paid for their autographs – including one player who allegedly received $160,000 in a single year for providing his signature.

Garcia didn’t name names, but several sources familiar with the quarterback’s allegations quickly pointed fingers in the direction of the 2010 Heisman Trophy winner from Auburn – who led the Tigers to a national championship (one game after eviscerating Garcia’s Gamecocks 56-17 in the SEC championship game).

Former Alabama running back Mark Ingram – who won the Heisman Trophy in 2009 – was also mentioned by these sources.

“There’s a market for Heisman collections,” a source familiar with the autograph authentication industry told FITS. “It’s why (2012 Heisman winner Johnny) Manziel’s scandal hit last year and why there are scandals over (2013 Heisman winner Jameis) Winston and Gurley.”

Manziel missed the first half of Texas A&M’s 2013 season opener after he was accused of signing items for cash.  Todd Gurley – the former frontrunner for the 2014 Heisman – has been suspended indefinitely by Georgia after he was accused of signing eighty items in exchange for $400.  Florida State is currently investigating whether Winston was also paid to sign items.

We think the whole thing is ridiculous … and have said so as part of our call to completely overhaul the higher ed-industrial complex (in which the Heisman Trophy award figures prominently).

“A lot of older collectors have Heisman collections – many featuring unique, personalized items,” our source added. “Also companies market Heisman collections independent of the individual, custom collections.  In both cases filling orders is easier and cheaper while the players are still in college.”

Some collectors reportedly go so far as to obtain autographs from “every player on the preseason (Heisman) watch lists just to cover their bases.”

Once players turn professional, their autographs cost money.  For example both Newton and Ingram signed with the same company – GT Sports Marketing – after their collegiate careers were over.  During his rookie year with the Carolina Panthers, Newton charged $125 for an autographed picture, $150 for an autographed football and $175 for a signed jersey.  An additional $50 charge was added if a personalized message (i.e. “To Johnny”) was included with the autograph.

Oh, and that obviously doesn’t include the costs associated with getting to the autograph shows …

So … will Garcia ever “name names?”

And if he does … is there any proof to his allegations?

The University of South Carolina is already investigating his comments, and we suspect the SEC will soon follow.  So stay tuned … this could get very interesting.

Clemson Football: Hunter Renfrow Out For At Least Four Weeks

What Garcia will do is wish he had kept his yap shut.

He’s gotta get his face in the papers somehow, though.

sCam Newton and Steven Garcia the gifts that keep on giving.

Reminds me of the palmetto shaped cutting board and accompanying cheese knife that was passed around my family and friends for about ten years.

I have one of those! Come to think of it, I gave it to…

You two must be related and haven’t realized it under you pen names.

You two must be related and haven’t realized it under you pen names.

Maybe we are all just flickering shadows of various manifestations of sock puppets and schizophrenia, waxing and waning, strutting and fretting… on the inside of GrandTango’s cranium?

Geez, man, don’t forget Famous Jameis when you make lists like this.

He’s still playing down at Free Seafood University, he will most certainly will make the list as soon as he’s out of college.

What has Cam done wrong since he’s been in the NFL? The Panthers are lucky to have him.

It’s one of the elephants in the room. As with most of the “star” athletes, you can roll a turd in powdered sugar, but that don’t make it a jelly doughnut.

only a hater tater would think someone would give $160k to a freshman. Garcia and Garcia were only together for one year and really it was more like half a year. I know you want it to be but it wasn’t.

As if I needed another reason to hate Cam Newton.

(After eviscerating Sakerlina … conventional wisdom was the Aggies were really, REALLY good.
Maybe an alternative explanation is in order.)