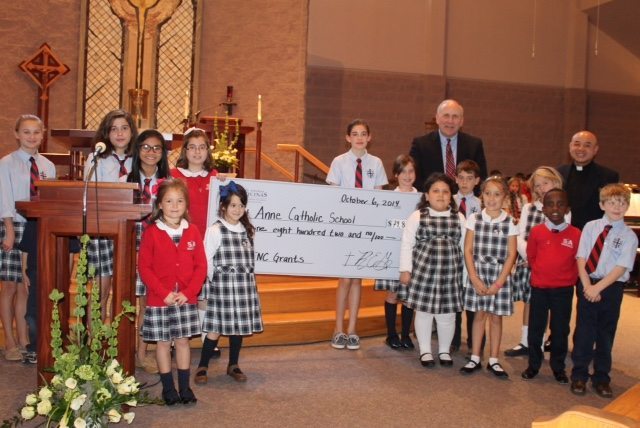 SO WHY NOT EXPAND IT?

By FITSNEWS || Earlier this week, more than a dozen grants were issued to exceptional needs students attending Saint Anne’s, a faith-based school in York County.  It’s the latest round of scholarships awarded through the Educational Credits for Exceptional Needs (ECENC) program, South Carolina’s popular – but pitifully narrow- parental choice proviso.

We’ve written about this program in the past … and are especially pleased to see S.C. Sen. Wes Hayes getting involved.  This website has been exceedingly critical of Hayes in the past, but he’s not only been instrumental in moving this legislation forward – he’s rolled up his sleeves and helped with the policy minutia that has helped made it a success.

Through the ECENC, sole-purpose charities award grants to exceptional needs students, allowing them to attend participating specialized private schools of their parents’ choice.  The program served more than 500 students in the second semester of last school year alone.  It now includes over eighty credentialed private schools and five scholarship funding organizations (SFOs).  The SFOs and schools are profiled in depth at IndependentED.org, the ECENC’s de facto homepage and clearinghouse.

The grants for students at Saint Anne’s were provided by the Saint Thomas Aquinas SFO, the scholarship provider affiliated with the Catholic Church in the Palmetto State.  Thomas Aquinas, and “Advance Carolina,” associated with the Christian Schools Association, have already earned reputations for disclosure and transparency far beyond the rigid legal standards set forth in the proviso.  Both are signatories of the “Access Opportunity Best Practices Pledge,” a commitment to never award scholarships to donors’ children; to publicize details of their scholarship awarding process and criteria; and to use a double-blind process for issuing grants.  Two other, newer SFOs (DESK and the Corporate Coalition for Community Service) has also committed to pledge.

A pair of forthcoming reports, one by regulators at the Education Oversight Committee (EOC), another by Access Opportunity, will offer details of how the nascent program is working.  From January to July, ECENC grants supported over 500 students with disabilities at 50 different schools across the state.

Funding came from scores of individual and corporate taxpayers, whose donations earned them dollar-for-dollar credits within a 60 percent liability limit and a first come first served $8 million statewide cap.

Forty percent of these ECENC students struggle with so-called “Specific Learning Disabilities,” a category of special needs that includes perceptual disabilities, brain injury, minimal brain dysfunction, dyslexia, and developmental aphasia.  A fifth are challenged by autism spectrum disorders and a third have significant speech and/or language impairment.  Scholarships have also been awarded to students with Downs Syndrome, Cerebral Palsy, orthopedic impairments as well as those who are legally blind.  Nearly two-thirds have siblings now enrolled in public schools, one of many indicators parents in the state can – and do – make child specific decisions about enrollment and instruction.

The ECENC is working.  Demand for both scholarships and the tax credits that fund them will outpace supply this year. More schools are signing up and donors have very marked choice among SFOs.  Not only are parents empowered to make decisions for their own children, but some of the most expensive and time consuming to educate students to serve are leaving traditional public schools, where (thanks to anachronistic funding laws that are program-, not student-, based) resources remain for other students.

This begs the question why so many other students, particularly low-income children and those most at risk of dropping out, can’t be served through the same tax credit mechanism?

There is a rising tide of support for parental choice … and growing public acknowledgment that dumping more money into the state’s failed government-run system is not the answer.

Let’s hope state lawmakers respond to those realities with a major expansion of choice when they return to Columbia, S.C. in 2015.

Another Day, Another MSM Outlet Covering “The Probe”