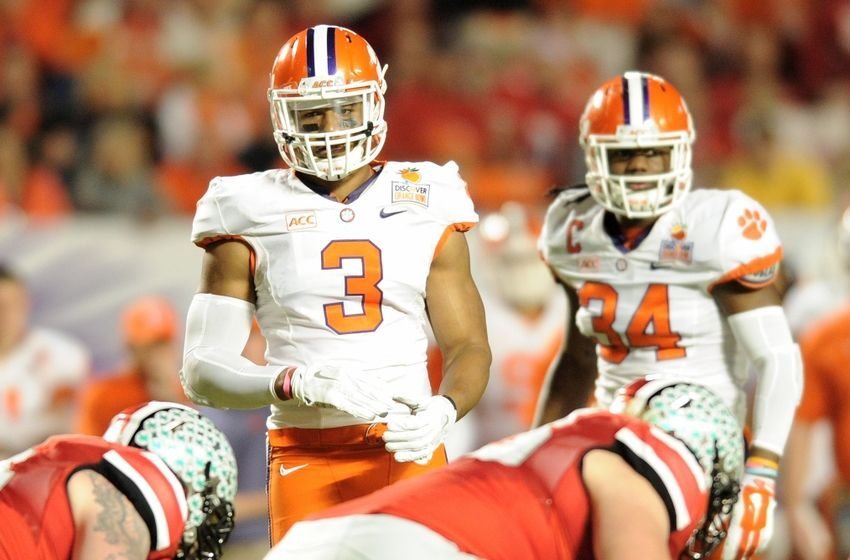 Clemson University’s Vic Beasley is one helluva football player.   The 6-foot-2, 235-pound defensive end from Adairsville, Georgia was a consensus All-American in 2013 after recording 13 sacks and 23 tackles for losses for the No. 7/8 team in the nation.

Projected as a mid-first round draft pick in the 2015 NFL draft, Beasley is the heart and soul of the Clemson defense – an explosive force off of the line of scrimmage who has a bright future ahead of him as a speed rusher in the National Football League.

But is Beasley better than former University of South Carolina star Jadeveon Clowney?

He apparently thinks so …

We understand the importance of having confidence in one’s abilities … but there’s a difference between confidence and cluelessness.  And Vic Beasley just cleared it by a country mile.

Clowney is bigger, faster, stronger and more explosive off the line than Beasley.  The unanimous 2012 All-American is a once in a lifetime talent, whereas players of Beasley’s caliber can be counted on to come along every year.

That’s why there was no question about Clowney’s selection as the No. 1 overall pick this year, while Beasley was projected as a second round draft choice (hence his decision to return to Clemson for his senior season).

Don’t get us wrong, Beasley is a great player … but self-aggrandizing comparisons like this one make him look silly (especially after Georgia’s offense ran all over Clemson in the fourth quarter of their season-opener two weeks ago).

Clowney, incidentally, underwent arthroscopic surgery on his right knee last week after suffering a torn meniscus during his NFL debut on September 7. He is expected to miss 4-6 weeks due to the injury.

Beasley’s Tigers take on the No. 1 Florida State Seminoles in Tallahassee, Florida on Saturday night. Kickoff is scheduled for 8:00 p.m. EDT with ABC televising the game nationally.

@wmmci @fitsnews hahahaha. Everything about clemson gotta be compared to big brother. Clowney is better. No doubt.

Gamecocks By An Inch!