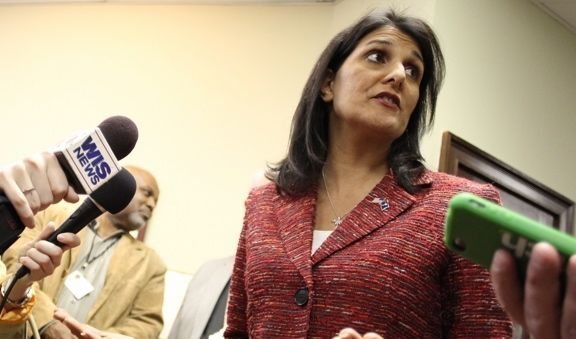 Harrell – who voluntarily stepped down from his leadership post pending the outcome of a nine-count public corruption indictment – has been replaced on an interim basis by S.C. Speaker Pro Tempore Jay Lucas.  In fact Haley – who has already called on Harrell to resign – is reportedly lobbying lawmakers to support Lucas’ candidacy for the position.

“She wants Bobby gone and Jay in the Speaker’s chair,” one lawmaker who heard Haley’s appeal directly told FITS.  “And she’s not being shy about either of those desires.”

Wow … given Haley’s own history when it comes to public corruption, that’s pretty shaky ground for her to be standing on.

Others in the running for the Speaker’s job – should it become open – are powerful House budget writer Brian White and a pair of former majority leaders, Kenny Bingham and Jimmy Merrill.   The jockeying for the position – one of the most powerful offices in state government – began almost immediately after Harrell’s indictment was announced.

It may also be costing Lucas votes.

“Word on the street is that Nikki will control Jay Lucas,” one lawmaker told us. “That’s why some of us are leery of him.”

Lucas has always struck us as a pretty straight shooter, and we don’t get the sense Haley – or anyone else – would control him.  Having said that, we’ve seen nothing from him – or any of the other lawmakers angling for this post – leading us to believe they are any different ideologically from Harrell, one of the big government liberals responsible for the Palmetto State’s “Lost Decade.”

“Heads they win tails you lose,” one of our friends in the S.C. State House lobby noted.

That’s the way it’s always been for taxpayers in the Palmetto State, sadly …