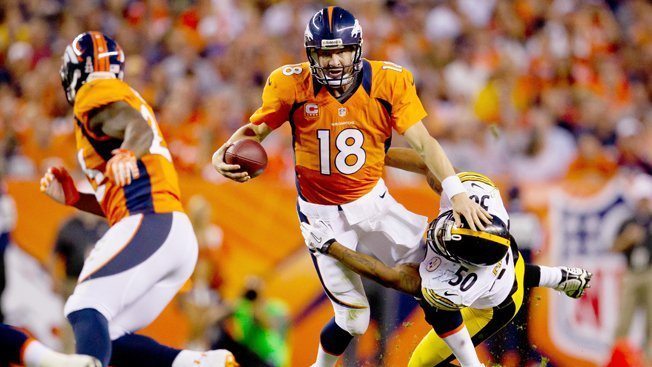 There are rumors that the University of South Carolina has already chosen its next head football coach – and is waiting until the end of the season to announce the much-anticipated hire.  In fact we learned over the weekend that current Gamecock assistant coaches have been told to stop their recruiting efforts (to the extent they were making any in the first place).

This allows the incoming coach to make the final decision regarding scholarships.

One name we think should be added to the list? Peyton Manning.

The 39-year-old former University of Tennessee standout recently broke Brett Favre‘s all-time passing mark – and he’s one victory away from becoming the NFL’s all-time winningest starting quarterback.  Last year he broke Favre’s mark for career touchdown passes.  A five-time MVP, Manning is in his 18th season in the league – and likely his last.

What will he do when he retires?  That’s a good question …

There is no more diligent a student of the game than Manning – who runs a quarterback academy and has been described as an “on-field offensive coordinator.”  He knows the game inside and out, and becoming a head coach at either the college or professional level seems like his destiny.

Of course Manning hasn’t exactly been keen on the speculation.  In addressing his coaching future back in September on the Dan Patrick radio show, he seemed to pour cold water on the head coaching concept – even if his alma mater came calling.

“Quarterbacks coach, I would do at Tennessee. Head coach? Absolutely not,” Manning told Patrick.” “People in Tennessee like me right now, Dan – I don’t know why.  But you become the head coach and cut that in half right away.  ‘Why are you throwing it on 4th and 1?  Why did you punt there; you should go for it.’  Cut it in half – it’s like being in politics.”

And if Tennessee called and expressed an interest in hiring him for that position?

“That’d be something,” Manning said.

Obviously Manning isn’t going to be the Gamecocks’ next head coach.  South Carolina’s regular season ends on November 28, and Manning will be playing with the Denver Broncos through the end of December (and into January if his team makes the playoffs).  The timing just doesn’t work.

But it’s an intriguing possibility, isn’t it?  Seriously: Imagine the steady stream of five-star high school signal callers that would flock to Columbia, S.C. to play for Manning.  And imagine the wide receiver recruits that would follow them.

Manning is also young, meaning he’s the sort of head coach you could build a program around for years to come …

Look, we know it isn’t going to happen.  This is probably just our founding editor’s “man-crush” on Manning talking again … but when you stop to think about it there’s a lot of upside to consider.