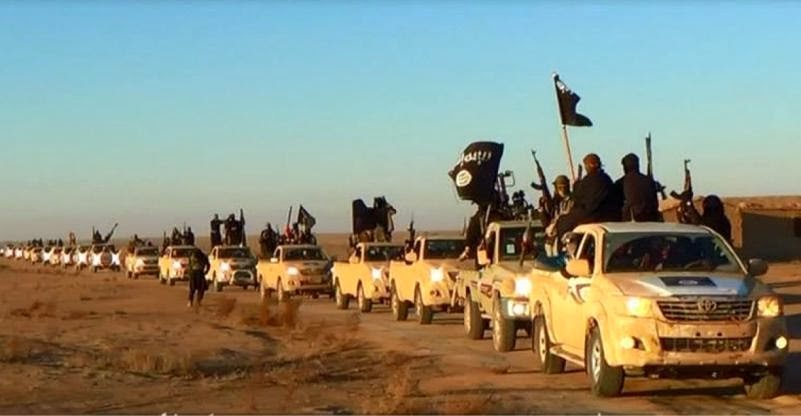 THE BATTLE TO COME …

America’s latest invasion of Iraq scored its first big success this week, as Kurdish soldiers fighting against the Islamic State of Iraq and Syria (ISIS) retook a dam in Mosul – thanks to U.S. air support.

The “good news” was touted by none other than U.S. president Barack Obama, who ironically campaigned on getting America out  of the “dumb war” in Iraq … you know, before he decided to put America back at war in Iraq (with no congressional authorization).

“This operation demonstrates that Iraqi and Kurdish forces are capable of working together and taking the fight to (ISIS),” Obama said. “If they continue to do so, they will have the strong support of the United States of America.”

Pay no attention to that $17.6 trillion debt, right?  The federal government is going to keep bombing these people with your money whether you like it or not … for as long as it takes to … what?

That’s the question, isn’t it? The argument of the rabid warmongers is that America must attack ISIS because ISIS is intent on attacking America.  Of course this ignores the fact America was supporting ISIS in Syria, and that America’s intervention in Iraq is only escalating the conflict – strengthening the organization’s recruitment efforts, radicalizing it further and setting our country up for retaliatory strikes (as if spending the last decade in Iraq trying to kill these people wasn’t sufficient to piss them off).

ISIS is no joke … which is why America shouldn’t be arming it or poking at it.

“The threat matrix is so wide and it’s so deep, we just didn’t have that before 9/11,” U.S. Rep. Mike Rogers said recently of the group. “A terrorist organization that holds land the size of Indiana, has tanks, helicopters, … as much as $1 billion in both precious metals (and) currency. And, by the way, they’re selling oil on the black market to the tune of about $1 million a day according to some.  That means you’ve got a severely dangerous organization.”

And where’d they get those tanks and helicopters?

“You can’t contain these guys,” former U.S. Ambassador to Iraq James Jeffrey told CBS News this week.  “You try to contain them, and you’re going to have hundreds of thousands of young men from across the Middle East either joining them or causing unrest in their own countries.”

Jeffrey added that Obama was eventually going to have to break his promise not to send ground troops back into Iraq because, according to him, “nobody has the training or equipment to accomplish what U.S. special operations forces can accomplish.”

Which again … is what?

If ISIS wants Iraq, we should let them have it.  And if they want Syria, well … last time we checked America was doing everything within its power to topple the regime of Bashar al-Assad, which is exactly what ISIS wants to see happen.

Bottom line?  Further American intervention in Iraq – or in the Middle East in general – unnecessarily exposes our citizens to the risk of terrorist attack.  Don’t get us wrong, America’s military should be armed to the teeth and ready to take decisive action to eliminate any credible threat to the national security.

But that’s not what we’re doing … we’re trying to police the world and build nations in our image.  With money that doesn’t exist.  In places where we are not welcome.

Is anybody shocked the plan isn’t working?