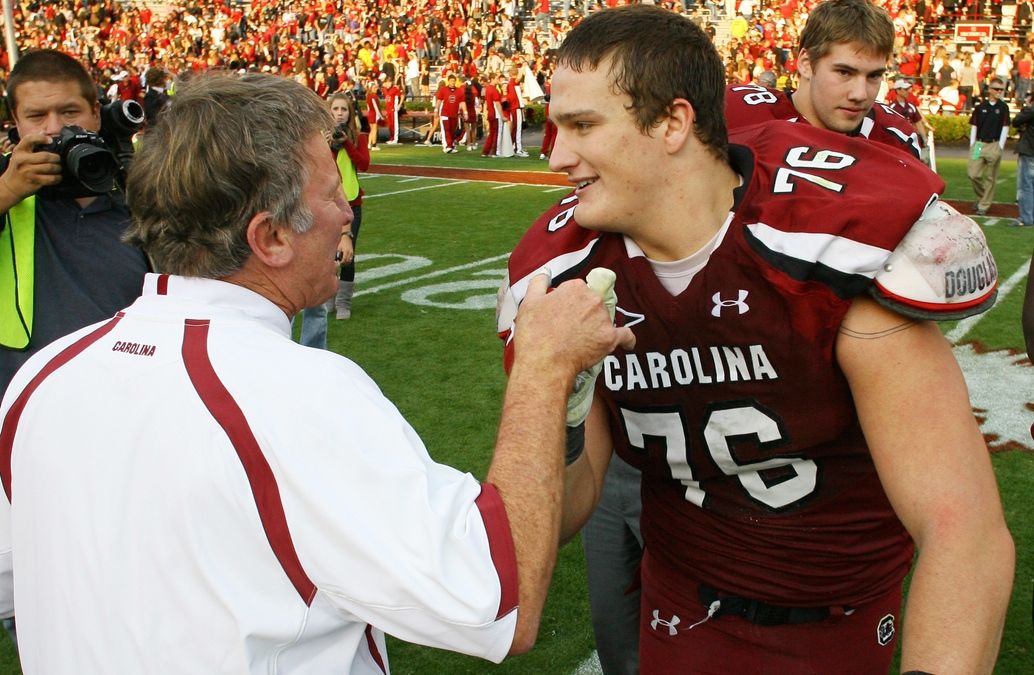 MIKE MATULIS GOES DOWN IN SCRIMMAGE

The 6-foot-5, 307-pound offensive lineman – who missed the entire 2013 season recovering from shoulder surgery – had to be helped off the field following the injury.

“Mike Matulis sprained his knee fairly severely,” USC head coach Steve Spurrier said. “They’ll wait and check it out and let us know how severe that was. We’re hoping it’s not as severe as it appeared.”

Matulis has started ten games since arriving in Columbia in 2011.

South Carolina – ranked No. 9 in the preseason USA Today/ Coaches’ poll – opens its 2014 season at home on Thursday, August 28 against No. 20 Texas A&M.  That game kicks off at 6:00 p.m. and will be televised nationally on the new SEC Network.

That kid can not catch a break.

I guess when you concider the fact that he was only on the scout team, and never played one single snap so he never officially lettered they unlike the media outlets trying to sell stuff, or Clem5ux fans wanting so badly to trash the gamecocks since they cant beat em anymore, they realize by definition he really wasn’t a member of the team so why label him as one. He is kind of like Rudy except never dressed or played outside of scout. You can do that all you want it shows how pathetic you are.

I’m guessing that your school yard spelling of “Clem5ux” is supposed to a derision to Clemson? I find it funny that USC fans recent history only lasts as long as the current football winning streak. And you certainly seem very defensive over this. But hey..at least I don’t live in Columbia.

But really it’s no different than this, is it:

Not defensive over this at all. Just love how the Taters all pull out chant sheets and repeatedly say the same BS over and over and its never an actual truth. (and try to act like secretly that 5 doesn’t eat away at them. Hell just think of it this way, you haven’t beaten USC since before Obama took office. Cover it all you want, 5 eats at you!!) back to this though, the kid didn’t actually play here. he practiced here. I could write stories about how Dabo broke the law but all he did was speed (even though technically that is still breaking the law). Keep living back in the past because its all you have. Hell history could also tell us that Harvard is a much better football team than Clemson because they have more national championships as well as conference titles since you only care about history. It must be true because history says so, or you can admit history doesn’t matter and the conference they play in is weaker, (kind of like the truth we say about the ACC). So which is it, history is what maters and you suck worse than Harvard, or history only means something to the team with no future. Poor Clem5on. it 5ucks to be you. I’ll have another finger for you this year too when you lose again! later lo5er

And just think…23 more years of straight wins by the chickens and the series will be even!

If the ACC sucks, and Clemson sucks, why is it such a big deal that USC has beaten them 5years in a row? (Since the USC is a perennial powerhouse in the mighty SEC). Shouldn;t it just be expected now–kind of like beating SC State? You invent “words” to call Clemson, you thrive on the rivalry all while simultaneously telling me that beating them shouldn’t really be a big deal.

I’m just a dumb old engineer, but something doesn’t work in that equation.

yeah Clemson having anything other than history. “You see This one time ant band camp, we actually used to beat the Gamecocks”

For the world beating, preseason national championship Gamecocks, why do you even care?

You have to watch the last game Clemson beat USC on Betamax? 5