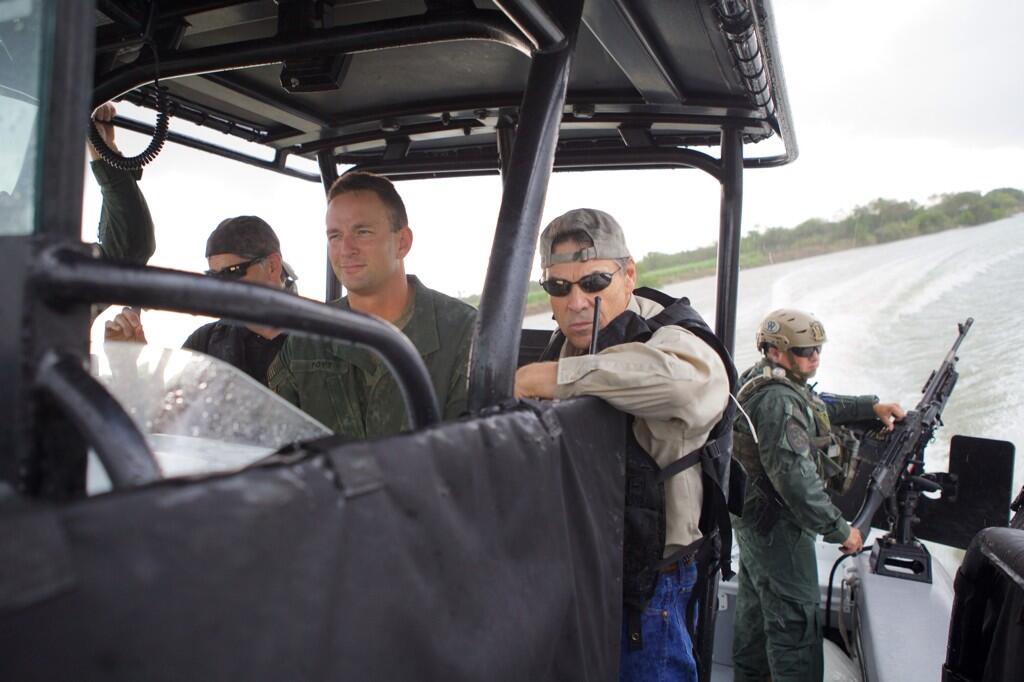 BUT DOES IT MATTER?

No prospective 2016 presidential candidate is milking the latest flareup on the immigration issue quite like Rick Perry.

“I’ve walked into the facility where these young kids are being held, and the look in their eyes — the lack of hope, they’re scared,” Perry said recently. “They’ve been lured here by policies put into place that basically said, ‘If you will come here and you cross that river, you can stay here in America.’ That’s a siren song that has to stop.”

The sixty-four year old – who has spent the last thirteen years as governor of Texas – has also posed for media photo ops with state military boats on the Rio Grande River.  He’s even held a machine gun in one of those boats alongside Fox News host Sean Hannity.

“I will tell you this: If the federal government does not do its constitutional duty to secure the southern border of the United States, the state of Texas will do it!” he is fond of bellowing.

Perry has followed up on that tough talk, too, recently dispatching more than 1,000 National Guard troops to Texas’ Southern border (while calling on Obama to send 3,000 new border patrol agents).

“I will not stand idly by,” Perry said. “The price of inaction is too high.”

For those of you with short memories, Perry was the frontrunner for the GOP presidential nomination in September 2011 … but by January 2012 had dropped out of the race, endorsing the candidacy of Newt Gingrich.

Why did Perry implode?

The short answer is a lack of intellectual curiosity …

“I know I’m not the smartest guy in the room,” Perry told one of his 2012 supporters in early-voting South Carolina (a state he paid a visit to last fall).

That turned out to be a colossal understatement …

We’ve been wrong about politicians before, but our hunch is Perry’s “revival” will be short-lived.  Based on everything we’ve seen so far, he simply lacks the gravitas  to sustain it.  And even if he does, Perry has a long history as a crony capitalist and sanctimonius moralizer – two things we simply cannot abide.

Still, his posturing on the immigration issue has succeeded in getting us to write about him again … which for a second-tier candidate like Perry is a victory unto itself.