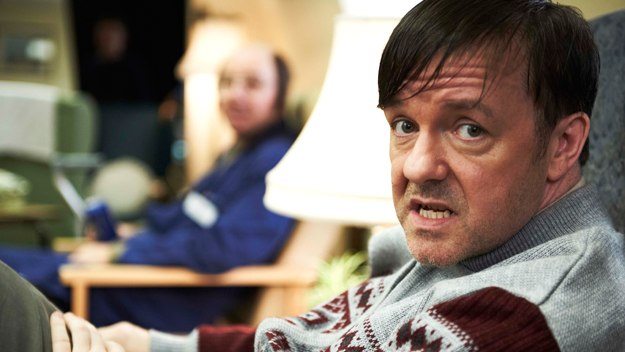 This website has written in previous installments about our love of House of Cards .  And Orange Is The New Black .  Both Netflix original series are pure genius … providing compelling narratives, intimately conceptualized characters, crisp drama as well as thought-provoking insights into our culture.

But there’s another series on Netflix we’ve fallen in love with … one that doesn’t take itself quite so seriously (well, until it does).

Technically, Derek  is a “mockumentary” – a genre we assumed was all tapped out in terms of its creative potential.  Apparently not.  The story of an affable middle-aged attendant at a retirement home, Derek  premiered on British television back in April of 2012.  Its “pilot” episode led to the production of six additional installments – which aired on Channel 4 in early 2013.  Netflix picked the series up in September of last year – and the second series of six episodes aired this spring.

All thirteen episodes are currently streaming on Netflix … and everyone we know who has watched them is hungry for more.

What makes this show worth watching?  It’s a rare television program that excels in all time zones – effortlessly bouncing from crude humor to genuine tugs at your heartstrings.  All thanks to characters you can’t help but become invested in emotionally.

Take the show’s protagonist Derek Noakes – played by Gervais – a socially awkward 50-year-old with a naive, unspoiled world view who loves the elderly people he cares for unconditionally.  Same goes for his bizarre coterie of friends.  Oh, and animals. Derek loves  animals – constantly scouring YouTube for fresh videos of them performing bizarre antics.

In fact, for your viewing pleasure, here’s the famous “Baby Monkey” video Derek obsesses over online …

“He loves it,” Derek says, watching the clip.

He does “loves” it.  And we “loves” Derek . Oh, and your kids will love “Baby Monkey.” Ad nauseam .  Along with all the other Parry Gripp videos Derek watches.

Of course it’s impossible not to “loves” Derek.  The guy sees nothing but the best in the world around him – even though he’s constantly exposed to death, and even though his life (by material standards) hasn’t amounted to much.

Channel 4 describes the show as “a bittersweet comedy drama about a group of outsiders living on society’s margins.”

We think it’s better than that …

First, it’s as funny a show as we’ve ever seen … assuming you can stomach some raunchy bathroom humor … but it’s also genuinely moving when it wants to be.  And the seamlessness with which it meanders between those extremes is where it finds its brilliance.

If House of Cards  or Orange Is The New Black  wasn’t enough to get you to cough up $8.00 a month for Netflix, maybe Derek  will do the trick.  It may lack the hype of its more famous cousins, but in an ocean of mindless entertainment it’s one of the few things worth watching.