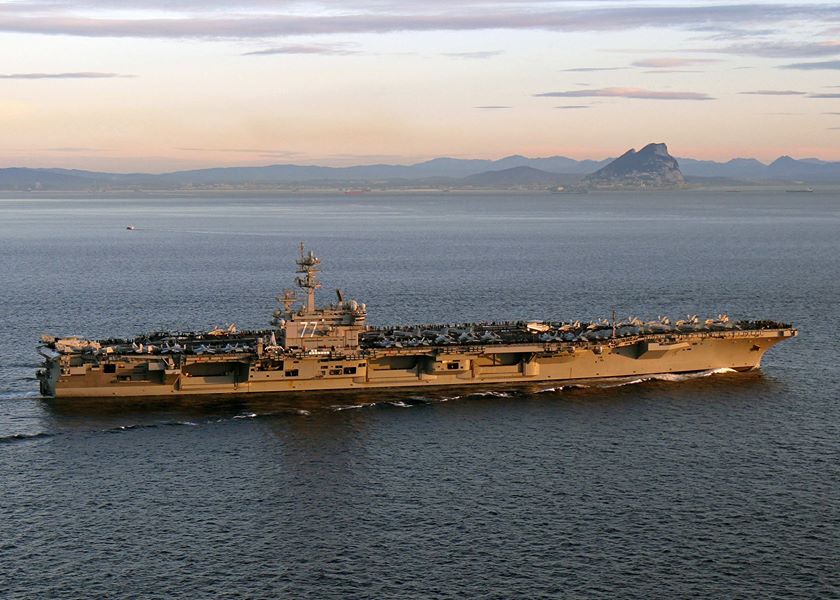 At least one American warship has been granted permission by Turkey to pass through the Bosphorus over the next forty-eight hours – although it’s not immediately clear whether the ship in question is the U.S.S. George H.W. Bush.

Wait …  hold up: We named a friggin’ aircraft carrier after that guy?

Anyway, the Bush (officially known as CVN-77) is currently in Piraeus, Greece – or at least it was yesterday. It may soon be headed toward the Black Sea – where it will ostensibly firm up the American military presence in response to Russian aggression in Ukraine.

The Bosphorus – a.k.a. the “Istanbul Strait” – separates Europe and Asia. It also separates the Black Sea from the Sea of Marmara, which connects to the Aegean and the broader Mediterranean.

The U.S.S. Taylor – a frigate – is currently at the Turkish Black Sea port of Samsun. It was one of two American warships dispatched to the region to assist in providing security for the 2014 Sochi Olympics, but it has remained there due to damage sustained after it ran aground on February 14.

American presidents moving warships into hostile areas is nothing new. Former U.S. President George W. Bush did it in 2008 when Russia stepped up its aggression in Georgia.

We oppose such movements. America has no compelling national interest in the Black Sea – and therefore no excuse for being there. In fact dispatching military assets to this region – at this time – is needlessly provocative. America’s Navy is not and should not be a “global force for good,” as its taxpayer-funded propaganda proclaims, but rather a force devoted exclusively to defending America.

We have no problem with government building $6.2 billion carriers to protect our homeland – and compelling national interests abroad – but nothing about the Ukraine crisis rises to that level. Or anything resembling that level.

America is not the world’s policeman. And even if it wanted to be, it can’t afford to pay the costs associated with the job. In fact the sad truth is America has lost all credibility when it comes to “fighting for freedom” – at home or abroad.