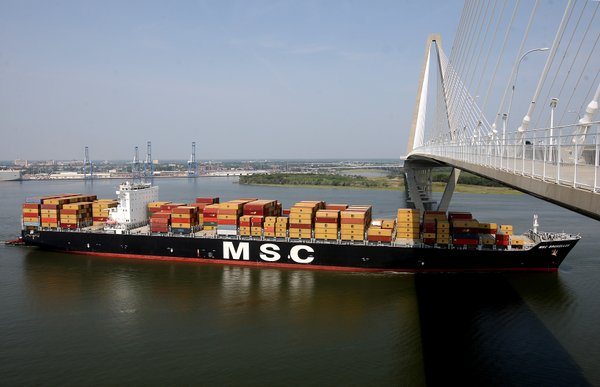 … AND IT HAS NOTHING TO DO WITH ICE

S.C. Gov. Nikki Haley and her scandal scarred Department of Transportation (SCDOT) experienced all sorts of problems with the Arthur Ravenel, Jr. bridge during two recent winter storms – problems which resulted in lengthy closings of the critical Lowcountry artery.

How bad are things? Well, Haley and her administration are currently reviewing the bridge’s warranty in an effort to determine what can be done to rectify the situation …

But does the Ravenel Bridge – a.k.a. the “Cuz Way” – have a much bigger problem to deal with? Something that overshadows its poor performance during winter storms?

According to our source – whose calculations are drawn from documented industry data – the Ravenel Bridge is not high enough to accommodate many of the world’s largest new container ships.

That could put the port of Charleston at a severe competitive disadvantage in the years to come … compounding existing competitiveness problems.

In a recent article in a Charleston, S.C. business publication, S.C. State Ports Authority (SCSPA) director Jim Newsome discussed the need for the government-run Wando Welch terminal to “ramp up in size and weight and force” in order to accommodate new Ultra Large Container Vessels (ULCVs) that hold as many as 14,000 twenty-foot equivalent units (TEUs – the common shipping industry metric).

Currently the Wando Welch terminal is only equipped to handle 4,000 TEU-sized ships.

Unless the facility upgrades, Charleston could miss out on business from shipping companies that are purchasing the new larger ships.

What did the article neglect to mention? That many of these larger ships will never make it to the Wando Welch terminal – which is located on the far side of the Ravenel Bridge (meaning ships that call on the facility must pass under the bridge).

Big deal, right? Surely this massive span – which opened less than a decade ago – was built with these larger ships in mind, correct?

Any bigger than that, though, and there’s the potential for serious problems.

What kind of problems?

“The ships Newsome is talking about draw 2 more feet of water, carry 4500 more TEU’s (2250 containers) and would rip the Ravenel Bridge off its moorings,” our source says.

“Our competitors know this which is why they laugh at us,” our source says. “I don’t laugh – I think it is unfortunate that we are paying Jim Newsome $350,000 a year and he isn’t being straight with us.”

Much has been made of the need to deepen Charleston harbor to accommodate the next generation of super-large container ships – and that’s an important debate.

Also an important debate? Whether state governments should manage their port facilities (most of them turn this responsibility over to private sector providers – which is consistent with the editorial position of this website).

But the ability of next-generation container ships to safely pass under the Ravenel Bridge is also an issue that needs to be addressed – if for no other reason than their inability to do so would expose colossally poor planning on the part of state leaders who spent $632 million in taxpayer money on this bridge.

FITS has reached out to the SCSPA regarding this issue and we look forward to bringing you the agency’s response. In fact we’ve promised SCSPA leaders equal time (and space) on our website for that very purpose.

SC Educrat Scam: Move Along, Nothing To See Here