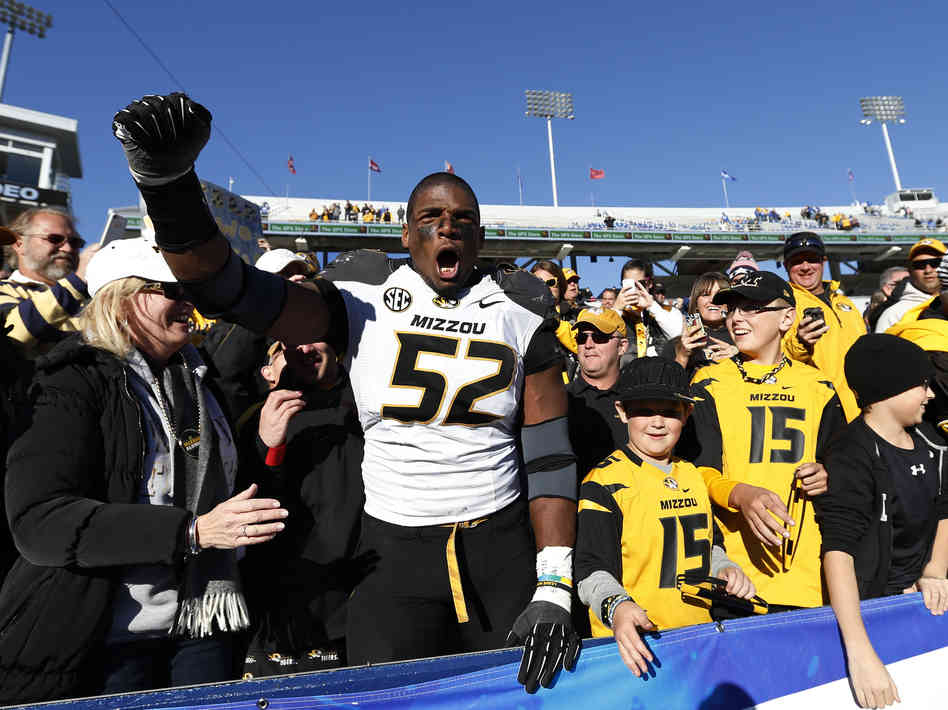 OUT OF THE CLOSET … INTO THE SPOTLIGHT

“I didn’t realize how many people actually knew, and I was afraid that someone would tell or leak something out about me,” Sam told ESPN. “I want to own my truth. … No one else should tell my story but me.”

Sam’s teammates – who say they are “relieved” his story is out – have been keeping his secret since August, which is when Missouri embarked on its wildly successful 2013 season.

To some people it does, but our guess is Sam’s sexual orientation will not figure into the thinking of NFL executives (who no doubt already knew about it). Bottom line: The 6-foot-1, 260-pound defensive lineman is likely a third-to-fourth round draft pick – probably too short to play defensive end as a professional (meaning he’s likely to be converted to linebacker) but certainly the sort of player who can make an impact if he finds the right team/ system/ position.

The 2013 SEC co-defensive player of the year clearly has skills (just ask the University of South Carolina’s offensive line) … it’s just finding the right fit that’s going to be key.

Same goes for any other 6-foot-1, 260 pound collegiate defensive end … gay or straight.

“We admire Michael Sam’s honesty and courage,” the NFL said in a statement. “Michael is a football player. Any player with ability and determination can succeed in the NFL. We look forward to welcoming and supporting Michael Sam in 2014.”

Others aren’t so sure, though … in fact we spoke with one college football fan who indicated they didn’t think NFL locker rooms were ready to welcome an openly gay player.

“I think he’ll be bullied, or even shunned,” the fan predicted. “And that’s a shame. If I were him, I wouldn’t have come out publicly. Not because it’s wrong to be gay, but because the NFL boys can’t handle it.”

Hmmmm … so while Sam’s sexual orientation may not matter to those assessing his abilities, it may matter a great deal to his teammates (and opponents).

All we can hope is that Sam – like any gay American doing any job – is judged on his performance. That’s what equality of opportunity is all about … everything else is just noise.

Related Topics:Michael Sam
Up Next

Connor Shaw Drops 5-Bomb After Being Booed At Christian Concert