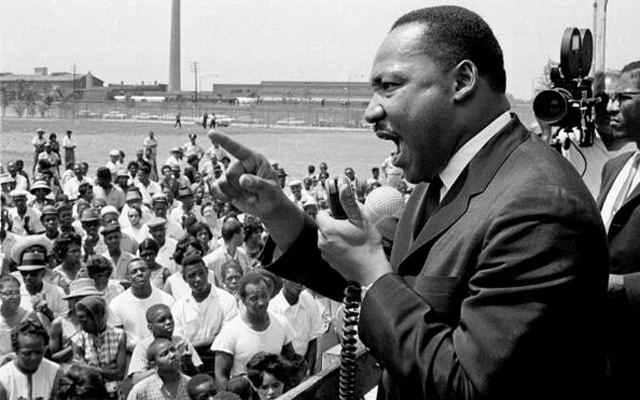 We’ve written extensively on this occasion in the past (examples here and here) but it is always worth pausing to take inventory of the impact King had on this country – as well as the current status of his “dream.”

First, it’s important to separate the man from the myth.  Lots of terrible things have been said about King, and some of them may be true. Of course we don’t care if he was communist womanizing hypocrite (as the cult of J. Edgar Hoover would have you believe) – or not.

None of that changes the fact that King – more than any other leader (of any race) in this nation – led a movement aimed at expanding the scope of individual liberty in America.  Fundamental freedoms were being denied en masse, and King endeavored to right that wrong.

He also paid for his efforts with his life …

This is the first and most important legacy associated with King – the essential role he played in expanding freedom.

But there’s another, sadder legacy at work here – specifically as it relates to the interpretation of King’s dream by the generations of black leaders who followed him.  What was once a noble battle against repressive governments on behalf of “equality of opportunity” has become in the space of less than half a century a shameful alliance with repressive governments seeking to impose “equality of outcome.”

And that alliance – in which ever-higher sums of tax dollars are spent incentivizing dependency – isn’t working for anyone, least of all those black Americans for whom King laid down his life.

The key takeaway from that report?

“Black leaders in the S.C. General Assembly are the ones fighting aggressively to keep lower-income South Carolina school children trapped in the schools producing these abysmal results,” we wrote.

Last October we were even more direct in a report bashing the National Association for the Advancement of Colored People (NAACP).

“The chains may be gone, but generations of blacks in South Carolina remain enslaved … trapped by a government-run education system that’s condemning them (and growing numbers of their lower and middle class white peers) to second class status,” we wrote in a post referencing the organization’s hostility toward expanded parental options.

Seriously … ask yourself this question: Is the status quo perpetuation that’s transpiring right now in places like Jasper County, S.C. indicative of King’s dream being fulfilled?  Or are there simply new “masters” profiting from the same old slave trade?

Here’s the bottom line: Government at all levels is robbing the middle class and the working poor and giving that money to the super rich and the non-working poor.  While running up a debt that can never be repaid.

And black leaders at all levels are – with rare exception – marching in lockstep with the theft, led by the first “black” president in American history, who frequently invokes King.

None of that is fulfilling King’s dream … it is making all of us less free. And poorer.