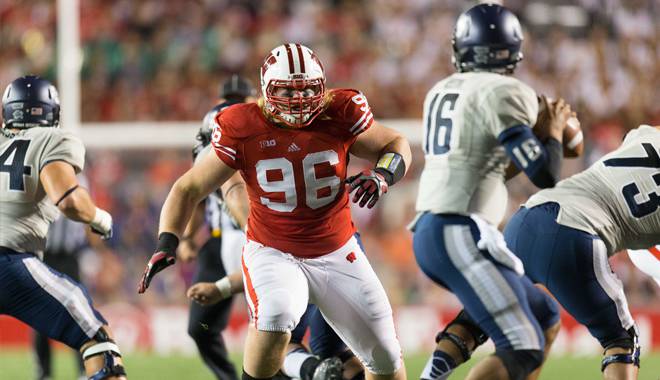 So there was an interesting exchange recently amongst a trio of Wisconsin University football players  – each of whom was asked to discuss University of South Carolina defensive end Jadeveon Clowney (who will face off against the Badgers in his final collegiate game on January 1 at the Capital One Bowl in Orlando, Florida).

Badgers’ tight end Brian Wozniak was diplomatic in his assessment, praising not only Clowney but the rest of the Gamecocks’ defensive front.

“It’s a real challenge to us,” Wozniak said, adding “they have more than just him.”

The Badger players were then asked if they had watched Clowney’s hit on Michigan running back Vincent Smith from the 2013 Outback Bowl – which of course they had.

The 6-foot-3, 333-pound Minnetonka, Minnesota native then joked that Wisconsin’s offensive line goes up against the “most talented and athletic defensive line every day” and that Clowney probably wasn’t “any more athletic than No. 96 in red.”

As lifelong Gamecock fans we’re required to hate them for the next month, but these Badgers actually seem kinda cool … unlike those self-important Nebraskans.