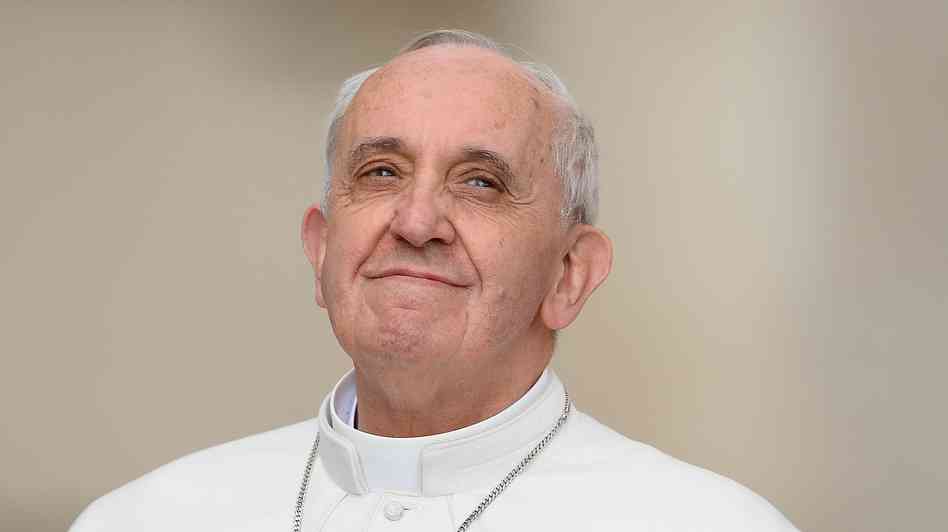 So get this: Pope Francis used to be a bouncer.

How do we know this? According to L’Osservatore Romano (the official newspaper of the Vatican), the new pontiff made the revelation himself during a recent parish visit to a church on the outskirts of Rome.

We don’t know much about Catholicism, but we know Francis is a much more aggressive leader than his predecessor.

He’s repeatedly waded into political matters and foreign affairs – including a meeting this week with Israeli prime minister Benjamin Netanyahu to discuss the Iranian nuclear program and ongoing tensions in the Middle East.

Of course Francis appears to be a bit naïve when it comes to some of his views – recently stating that he supported government intervention against “unfettered” capitalism and a “culture of prosperity.”

Wait … a “culture of prosperity?”

Clearly this guy has never been to South Carolina …

Anyway, roughly 1.2 billion people worldwide – including 75 million Americans – are Catholics. Those numbers have remained steady in recent years – but the intensity of the faithful appears to be lagging.

Our advice to Francis? Focus more on ministering (and less on demonstrably misguided economic criticism) and more Catholics might start practicing what his church preaches …

UPDATE: There’s a column in The National Review suggesting Francis’ criticism of the free market was due to a bad translation. We’re not buying it, but …

UPDATE II: Worth noting … we absolutely agree government must exist (and take sanctioned action) to protect life, liberty and property. What we reject is government performing non-core functions, engaging in crony capitalism and incentivizing dependency, among other things.

“You Cannot Negotiate With Iran?”

The Pope is no liberal really.

Hes just a guy who worries a little bit more about regular folks getting a better break than he does about the Koch brothers tax bill.

He aint no Republican!

Yeah I argue for individual income tax relief as opposed to government subsidies for Boeing. I am clearly no friend of the “regular folks.” Also last time I checked my website was exposing the Kochs for what they are … https://www.fitsnews.com/2011/12/29/koch-brothers-to-benefit-substantially-from-savannah-river-sellout/

And you aint no damn Republican!

I’m at a loss here is “…you aint no damn Republican…” a compliment or a criticism?

I don’t get it either…
or the excessive use of double negatives.

Do you want to help us out here, “Fits Aint No Republican”?

I would say he is for sure a liberal, or rather a progressive. In his short palacy he has been pushing the church more then any pope that I can think of

Let me guess, a “friend” told you this?

Getting thrown out of the bar by the future pope has to count for something. Hopefully not excommunication.

You’ll know the Apocalypse is nigh when the POPE enters the DJ booth and announces:

Former bouncer here but not Catholic. Back in the day, of course. That’s where I learned sweepin shiit.

So now helping the poor according to your warped republican brain is “incentivizing dependency”?

If someone hits your websites “Donate” button and donates to your website what do you call that?

“If someone hits your websites “Donate” button and donates to your website what do you call that?”

That would be called either charity, or the desire to pay someone for their hard work even though you are not required.

Compare that to, someone taking $20 dollars from you and then going to the local bar and handing it to an alcoholic and saying, “Here, I care about you, have a drink.”

The Pope calls a meeting of all the cardinals. After they have assembled at the meeting hall in the Vatican, the Pope says, “I have good news and also some bad news. The good news is that I just talked to Jesus. He has been resurrected, so our faith in his existence has been justified.”

One of the cardinals stands up and asks, “What’s the bad news?”

The Pope replies, “He was calling from Salt Lake City.”

the new Pope walks the walk, I only wish more chistians would, myself included.

How proud would you be to wear a shirt that said, “I got my ass kicked by the Pope!”?

I am a heathen.Why can’t we have another hot and sexy,Pope?