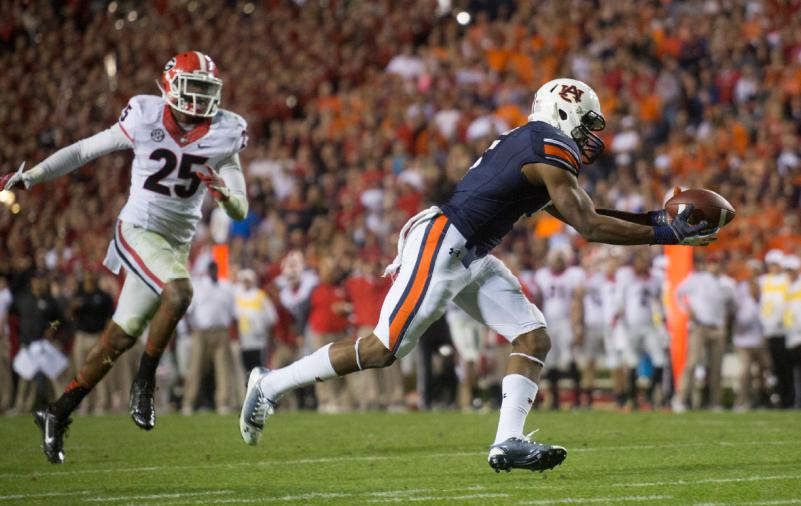 In case you missed it, Auburn pulled off the most improbable game-winning touchdown this weekend since Louisiana State’s “Bluegrass Miracle” of 2002.

Leading Georgia 37-17 with under ten minutes left in the fourth quarter, the No. 7 Tigers inexplicably collapsed on both sides of the football. In fact they found themselves trailing the No. 25 Bulldogs 38-37 when UGA quarterback Aaron Murray scored on a gutsy five-yard dive that barely saw the nose of the football inch across the goal line.

After instant replay confirmed the touchdown, it looked as though one of the biggest come-from-behind victories in Murray’s storied career at UGA was complete.

(Cue Lee Corso’s “not so fast my friend” line).

Auburn took over with 1:49 left on the clock, but head coach Gus Malzahn’s team quickly found itself faced with a fourth-and-eighteen from its own 26-yard-line.

That’s when this happened …

For those of you keeping score at home, that’s Nick Marshall passing 76 yards to Ricardo Louis for the game-winning score.

Our favorite part of this clip? The little white guy in the background at the 55-second mark who jumps about four feet in the air in uncontrolled exuberance …

Anyway, this immaculate deflection was particularly providential for University of South Carolina fans, as it (along with the Gamecocks’ 19-14 win over Florida) eliminated Georgia from contention for the SEC Eastern Division championship.