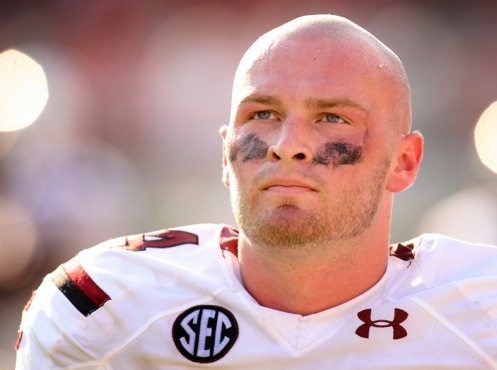 University of South Carolina quarterback Connor Shaw rallied his team from a 17-0 deficit on the road against the fifth-ranked team in America – and then tossed a game-tying touchdown on fourth down in overtime to keep his team’s hopes alive.

Shaw completed 20 of 29 passes for 201 yards and three touchdowns in relief of starter Dylan Thompson – who played reasonably well but was unable to lead his team on scoring drives during the first two-and-a-half quarters of the game. Thompson finished completing 15 of 27 passes for 222 yards with no touchdowns and an interception.

Shaw won’t improve on his 22-5 record as a starter – but he flat out won this game for his team, connecting on deep pass after deep pass against a Missouri defense that had successfully taken those reads away from Thompson.

None of Shaw’s throws was more clutch than the fourth-and-goal completion to wide receiver Bruce Ellington in the first overtime from fifteen yards away.

South Carolina has home games against Mississippi State and Florida remaining on its conference schedule.

Prior to Saturday’s loss, Missouri had defeated each of its 2013 opponents by fifteen points or more – including back-to-back wins over then-No. 7 Georgia and then-No. 22 Florida. They were well on their way to extending that streak – and their dream season – until Shaw got the Gamecocks going against a stingy defense led by national sack leader Michael Sam.

Speaking of defense, South Carolina’s much maligned unit held strong when it mattered – keeping Mizzou out of the end zone in the second overtime and forcing the missed field goal attempt by Tigers’ kicker Andrew Baggett.

‘Beamer Ball’ Is Back … But What Else Have The Gamecocks Got?

Good Lord that was hard to watch, but DAMN!

Like it was made for TV. Who woulda’ thought. Even the announcer was stunned. He hesitated when the ball smacked the goal post and suddenly realized that the Gamecocks had won. He stammered to announce the winner. Amazing game.

Tonight’s win was as miraculous as our win over Duke in the late ’50’s, 7-0. My late brother (who was just old enough to drive at night) and I rode all over town yelling the score. It was a glorious night! Just like tonight. A hurt Shaw, Ellington, and Davis arose from their ashes and pain, and with a little luck and the hard work of the Gamecock D, played a fourth quarter as good as the Carolina comeback against Army in the early ’50’s. As for the missed field goal, Tommy Suggs predicted it! I always thought he was a psychic.

No, I believe he’s Presbyterian…

Good thing he’s not Lutheran of the Missouri Synod, they would have stoned him.

And for the record boys and girls, it was your beloved Colonel who called this one Gamecocks by a field goal!
GO COCKS!

Now how did the Colonel know that? And I thought the term “Army Intelligence” was an oxymoron…….

Colonel, your promotion is imminent……

Now how did the Colonel know that?

It was truly sad watching them big old farm boys cry. It will be a day of mourning in Missouri. All John Deere ball caps will be worn at half staff and all radio stations have been instructed not to play, “Do You Think My Tractor Is Sexy”

And back here in South Carolina the locals will stay uneducated and the pickup trucks will remain up on blocks on doublewide trailer front yards.

I love how cocky the fans are, go to Cockytalk and read the game thread up through midway of the 4th quarter. Most were demanding Spurrier’s resignation and for Tanner to fire anyone associated with the program, then they do their typical Gamecock bandwagon crap and now we’re national championship contenders. It just goes to show you how much this team will suck next year without a quarterback.

Each fan base has their share of reactionary idiots. You can see that on ANY message board. Which team do you pull for?

Yeah I’m sure Alabama has fan base majority made of up people who are both bipolar and suffer from tourette’s symdrome like Gamecock fans do.

Most Bama fans only connection with the school is the fact that they generally have a winning football team – the penultimate bandwagon fans.

around the bowl and down the hole. Roll Tide Roll.

I will fall on my sword this morning; I had Missouri picked to blow the Cocks out and in the first half that looked to be coming true. Credit where credit is due, Connor Shaw is a leader. Period. An “iron man” and a field general. If he can do what he did last night with a messed up shoulder and a bum knee, and Ellington has a bad foot (and is still looking forward to basketball)….Clowney needs to just STF up and play some ball, I think everybody is about sick and tired of his whining. And quite honestly he has been the “issue” that has sort of turned me against the ‘Cocks this year.
Back to subject….the Gamecocks “grew up” a lot last night. “Gutting it out” doesn’t even describe that 2nd half and the two OT’s.

I’ve missed all the “Clowney whining” you talked about, especially lately, and don’t know why one player would turn you against your team, but otherwise good post and I agree. USC definitely grew up last night and this is the type of confidence builder we desperately needed this season.

Daaaaay-um FITS!
You got this post up almost an hour quicker than your post on Clemson’s loss* last Saturday. TBG’s browser must be f**ked up , cuz he NEVER saw the recap of the Sakerlina/Tennessee game.

Yup. I was in Myrtle Beach last Saturday saying goodbye to my dying Grandmother. What an asshole I was for not writing a recap of the USC/UT game …

Will – I agree with you – great title for the article and what an incredible game! Connor Shaw was the game hero without a doubt. FYI – I am reconsidering my comment on last week’s article about the Clemson/FSU game calling you an asshole.

Amazing win, glad to see the Gamecocks pull it off!

I woulda traded Jimmy Bell and Jimmy Addison for that boy and woulda thrown in Edgar McGee to boot. Well, not really, but he can sho play football.

So does anyone believe Mike Davis’s leg moves like that and there’s no damage? I’ll predict that he’s diagnosed with a concussion, nobody takes a hit like that, plays as shitty afterwards and doesn’t have some concussion symptom, he got his bell rung on that helmet to helmet hit.

If anyone ever doubted Conner Shaws guts and determination doubt no more. I am hearing the Mizzou missed field goal called ” the Shaw shanked redemption” great game.