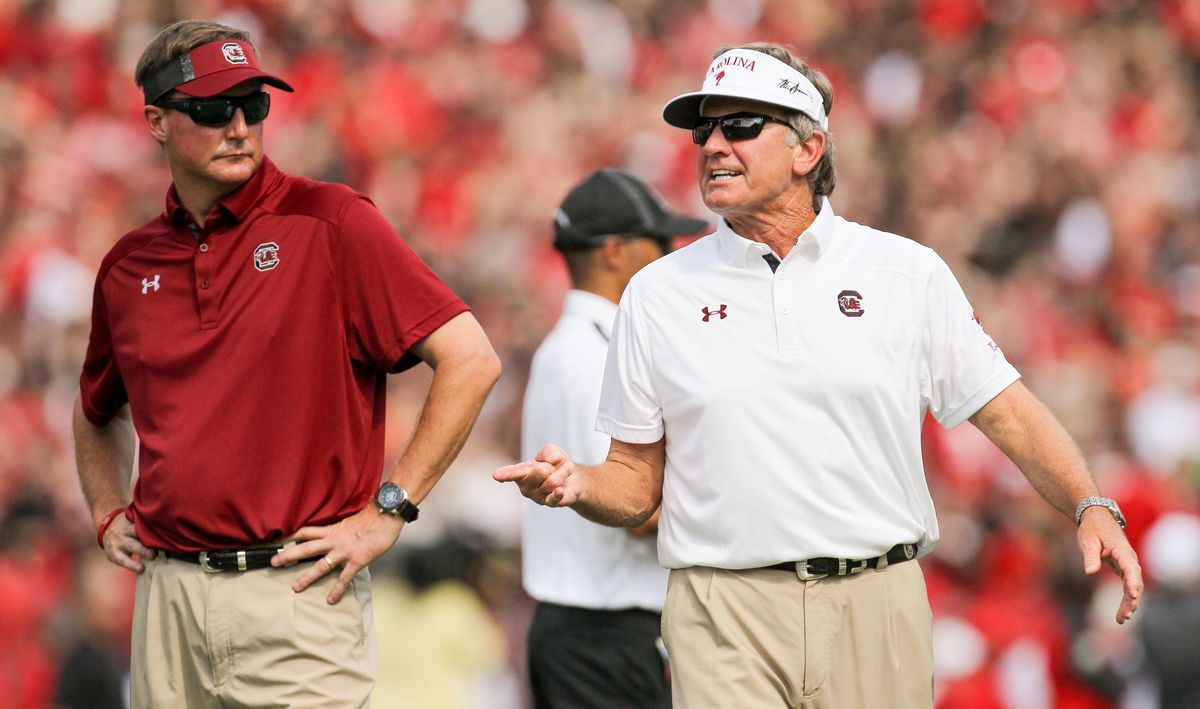 In both the 2011 and 2012 football seasons, University of South Carolina head football coach Steve Spurrier has made headlines for his petulant battles with columnist Ron Morris of The (Columbia, S.C.) State newspaper. In fact last September things reached a boiling point when Spurrier issued an ultimatum regarding Morris, saying he was “not taking any more of this stuff that’s coming out of our local paper.”

“If that’s part of the job, I’ll head to the beach,” Spurrier added.

As we’ve noted previously we’re not fans of Morris. He’s written some moronic stuff – and made some over-the-top comments about Spurrier’s program. But we’ve also called out Spurrier for the juvenile manner in which he has handled Morris’ criticism.

Anyway, things have been all quiet on the Spurrier-Morris front this season … and apparently there’s a good reason for that.

According to a new post from media blogger Jim Romenesko, “The State has told Morris he can no longer write about University of South Carolina Gamecocks football.”

“The State’s publisher, Henry Haitz III, made his veteran columnist agree in writing that he would never again write about Gamecocks football or talk about the USC program on TV and radio shows,” Romenesko continues.

Whatever you think of Morris, that’s ridiculous. And for those of you thinking “why not just fire the guy?” Haitz apparently tried to do that last season.

“(Haitz) wanted his columnist fired,” Romenesko writes. “Executive editor Mark Lett talked him out of it, though, according to sources. There were no legitimate grounds for dismissal, the publisher was told … Morris kept his job, but he was told he could no longer attend Spurrier’s press conferences. He was also ordered by the publisher to write an apology column.”

FITS attempted to reach Haitz for comment, but he didn’t return our calls.

Replacing Morris on the sports pages at The State?

Wow … can’t wait to read the incisive commentary coming from that guy, who oh by the way received his job at The State in no small part thanks to a phone call from Spurrier, who admits he “put in a good word” for the 67-year-old fan.

This is not how it is supposed to work, people. Coaches prepare their teams and direct them during games – and columnists critique them based on the outcome. That’s the way it is.

Our website was among the most aggressive critics of Spurrier from 2007-09, when his teams were failing to show a consistent level of improvement which we believed was warranted. Over the last three seasons, though, Spurrier has proved us wrong (and shut us up) by winning games. In fact the only occasion we’ve had to criticize him over the last three years is when he goes off on these petty Ron Morris vendettas.

Spurrier is a great coach. The best South Carolina has ever had. But he’s got to understand that criticism – even unfounded criticism – comes with the territory. It is “part of the job.” He’s also got to realize that it’s up to the marketplace of ideas – not his heavy-handed threats and suppression of journalistic freedom – to sort the good out from the bad.

UPDATE: Deadspin – the greatest sports website in the world – has a story up on the Spurrier-Morris-State fiasco, calling it (accurately) “bullsh*t.” So does The Sporting News, which refers to Spurrier as the “capo di tutti cappi” (or “boss of all bosses”) in Columbia, S.C. Meanwhile a local alternative paper in Charleston, S.C. is referring to Spurrier as the “Kim Jong-un” of Williams-Brice Stadium. Ha!

UPDATE II: The State has flip-flopped. It is now “allowing” Morris to cover Gamecock athletics again if he wants.