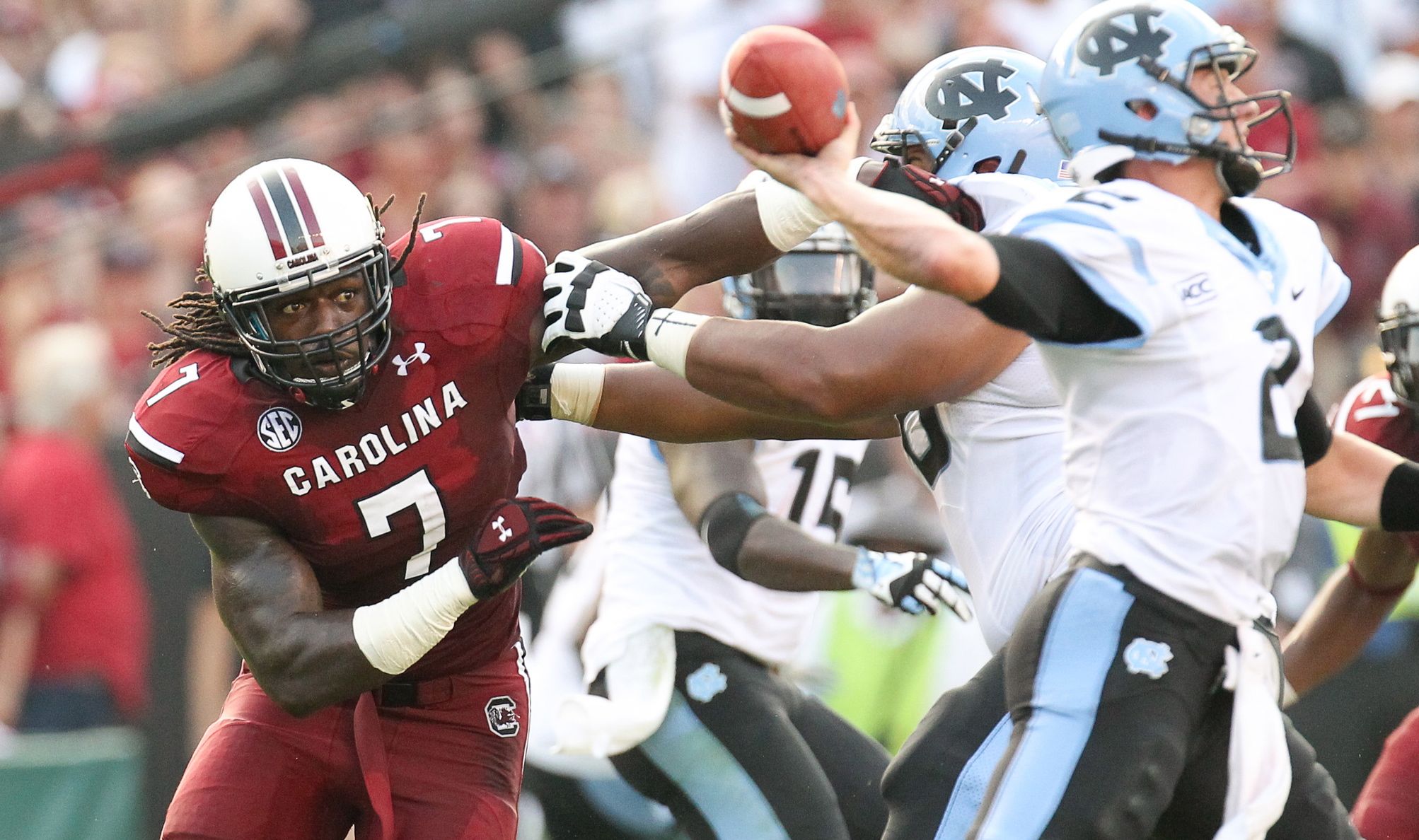 The University of South Carolina defensive end – hyped to mythical dimensions during the preseason – did not channel the Scottish warrior and consume the visiting North Carolina Tar Heels with “fireballs from his eyes, or bolts of lightning from his arse.”

There was lightning … but that came from mother nature, not the man-child frequently referred to as a “freak of nature.”

Clowney didn’t have a terrible game. In fact he played a critical role in keeping the Tar Heel offense out of the end zone after a nearly two-hour weather delay interrupted the fourth quarter of South Carolina’s 27-10 victory on Thursday night. But he also failed to record a sack, had a penalty called against him and  – most disturbingly – didn’t appear to have his motor running at full throttle.

“I told him during the break, ‘You ought to be well-rested now,'” Gamecock head coach Steve Spurrier told Clowney during the extended delay. 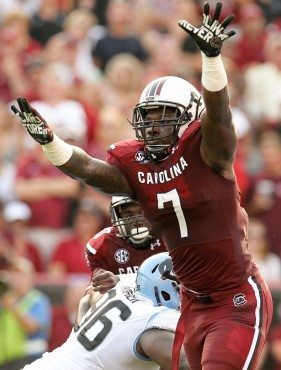 Clowney, who boasted about being in the best shape of his life heading into the 2013 season, didn’t appear well-conditioned against North Carolina. In fact on numerous plays he looked … tired. Even lazy. And then there were the numerous other plays he missed, including a critical fourth down conversion by the Tar Heels which led to their only touchdown of the game.

Why wasn’t Clowney in the game for that play?

It better … or else Clowney’s Heisman Trophy quest is going to be over before it begins.

Spurrier acknowledged his superstar didn’t have his best game.

“Did you watch what I was watching?” he told reporters when asked about Clowney after the game. “I don’t have to say it.”

To his credit, Clowney was suffering from the lingering effects of a stomach virus. And, as usual, he was double teamed on virtually every play. And North Carolina ran away from him all night – calling runs and short passes that went where the 6-foot-6, 274-pounder wasn’t.

Oh, and there were more than a few holding penalties against North Carolina offensive linemen which could have been called – but weren’t.

In spite of all that, Clowney showed flashes of his dominant, game-changing ability – racking up numerous quarterback pressures and recording three tackles. He also had UNC quarterback Bryn Renner in his grasp for a sack late in the game – only to have him slip away. But the “highlight gods” demand more than “flashes” from Clowney – they hunger for thunderous bone-crushing tackles like the one he delivered against Michigan’s Vincent Smith in the 2013 Outback Bowl.

Clowney will get another chance to satiate their appetites – and get his Heisman campaign back on track – when the sixth-ranked Gamecocks travel to Athens, Georgia on September 7 to do battle with the fifth-ranked Bulldogs. A big game between the hedges against Georgia and Clowney’s disappointing debut against the Tar Heels will be quickly forgotten.

@fitsnews Wasn’t he battling a stomach bug last week? I’d give him a pass for now