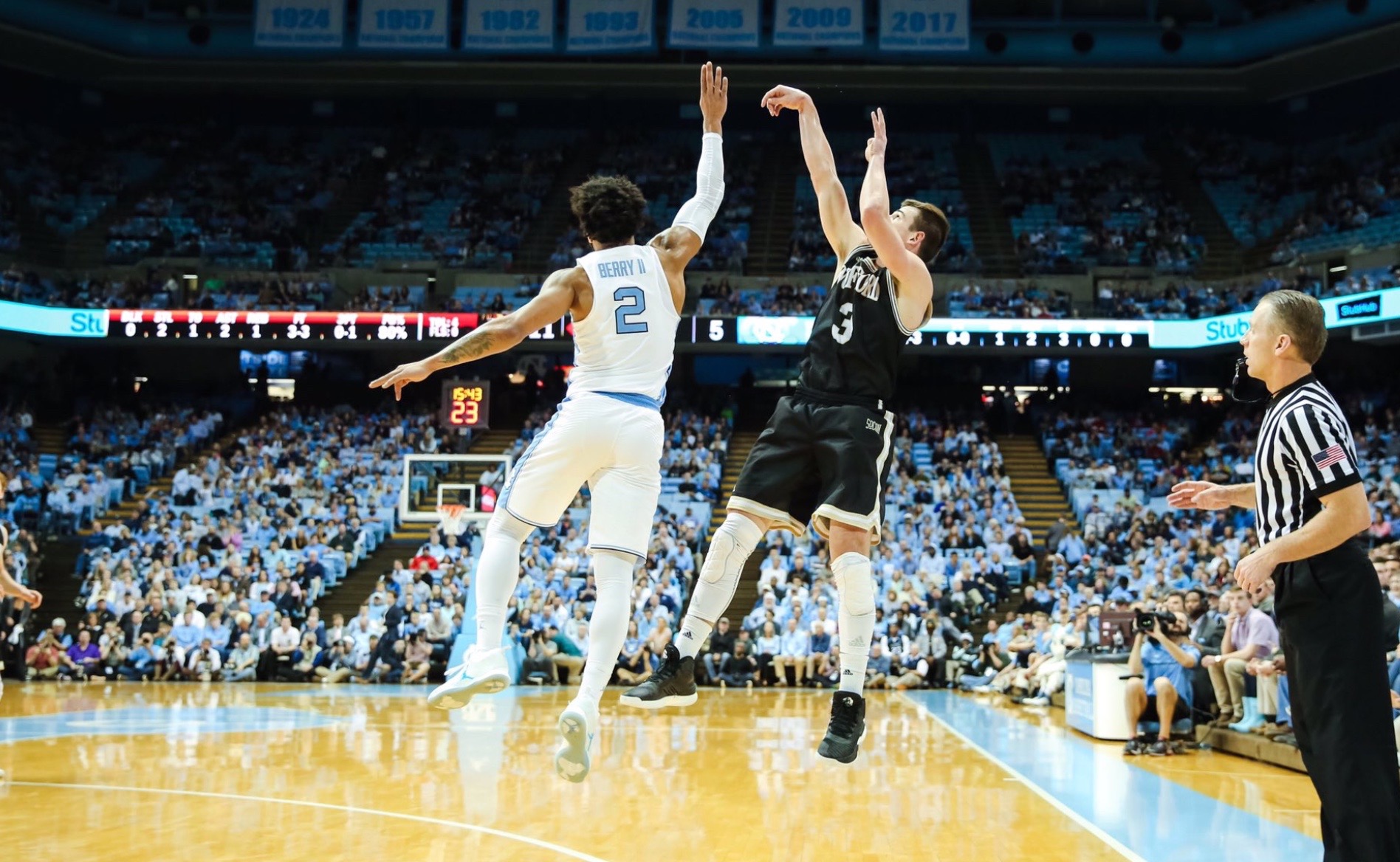 On Tuesday, January 16 the Clemson Tigers’ men’s basketball team will head to Chapel Hill, North Carolina for a date with the North Carolina Tar Heels.  Clemson will be seeking its first-ever road win against North Carolina – a team that has beaten the Tigers in each of its fifty-eight previous meetings at home.

Tigers’ head coach Brad Brownell might do well to take some pointers from Wofford, which pulled off the mother of all upsets earlier this week over the defending national champion Tar Heels.

In only its third game ever against North Carolina, Wofford pulled off a historic 79-75 upset – shocking the fifth-ranked Heels on their home court.  Powered by 27 points from junior guard Fletcher Magee, Wofford won a game that the experts over at ESPN gave them only a 3.1 percent chance of winning.

In the process, they snapped the Heels’ 23-game home winning streak.

Magee is shooting lights out – connecting on 57 percent of his field goals and 55 percent of his three pointers.  The Orlando, Florida native has scored in double figures in 57 consecutive games – the second-longest active streak in the nation.  Earlier this month he pumped in 36 points in Wofford’s 63-60 victory over Georgia Tech – another Atlantic Coast Conference (ACC) team.

How improbable was Wofford’s win?

The Terriers (8-4) were 0-22 all-time against ranked opponents heading into the Dean Dome last Wednesday evening.   They finished 16-17 last season and were picked to finish sixth this year in the ten-team Southern Conference.

Wofford’s win was more than just another compelling David versus Goliath narrative.  It was a resounding rebuke of a program that – while wildly successful for decades – has been caught making a mockery of collegiate athletics.

Earlier this year, head coach Roy Williams and his program emerged unscathed from their infamous “paper courses” scandal – in which university officials were accused of funneling athletes into #FakeClasses in an effort to keep them eligible for competition.

Specifically, Tar Heel basketball players (and other “student” athletes) were allegedly steered toward Department of African and Afro-American Studies courses which did not require regular attendance, offered flexible grading, had lax-to-nonexistent faculty oversight and required them to submit just one paper over the course of the semester.

Along with the #HoopsGate saga, the North Carolina #FakeClasses scandal is the latest example of the hypocrisy and ethical bankruptcy of America’s government-subsidized collegiate athletics complex.

Indeed it does … but for the moment let’s all savor Wofford’s wonderful win (and North Carolina’s well-deserved defeat).