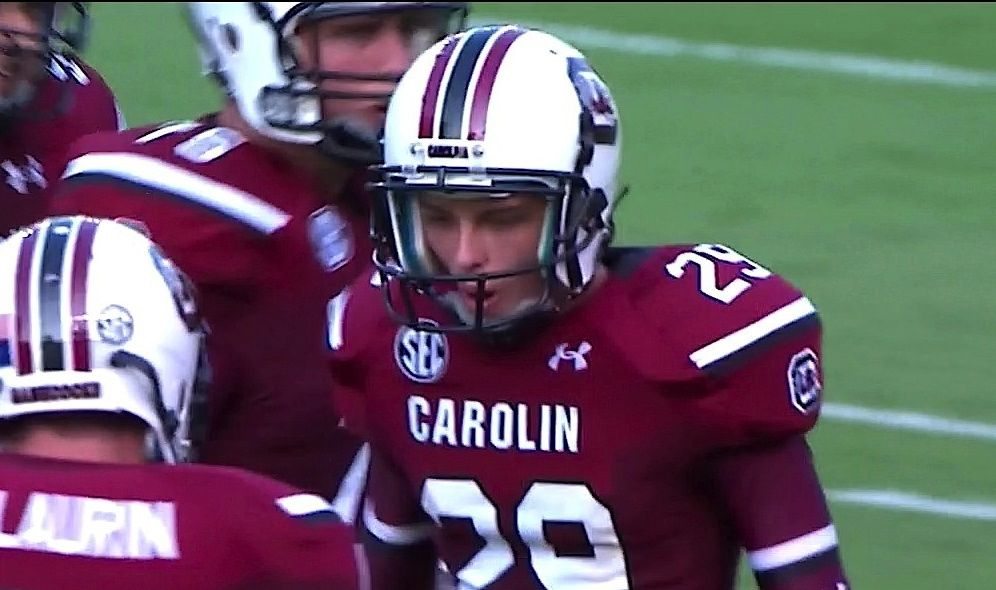 One of the new faces on the University of South Carolina football team this year is true freshman placekicker Elliott Fry. The 6-foot-0, 150-pound Texas native is a walk-on – meaning he wasn’t considered good enough to be offered a scholarship by the Gamecock coaching staff.

In fact the only school which thought Fry was good enough to compete was Louisiana Tech.

When he arrived at USC this summer, Fry was third on the depth chart behind sophomore Landon Ard and redshirt freshman Nick St. Germain (who is on scholarship). Over the last month, though, he’s emerged as the top kicker on the team – and was perfect in his 2013 debut against the University of North Carolina.

Fry connected on a pair of field goals – a 39-yarder and a 26-yarder – and nailed all three extra points against the Tar Heels. With nine points, he’s the team’s leading scorer after one game.

Of course while Fry gets an “A” in our book for his effort, he didn’t get an “A” from South Carolina’s equipment managers. In fact his No. 29 garnet jersey was emblazoned with the word “CAROLIN” – as opposed to “CAROLINA” (somebody cue Rodney Dangerfield).

Hmmmmm … maybe he should have gone to the Gamecock Stop instead.

Anyway, congrats to Fry on his successful debut as the Gamecocks’ new placekicker. We think he’s earned an “A” for next week’s game against Georgia.

Johnny Football Gets Off

Gamecocks Reload … But Is It Enough?

Clemson Holds In The Polls

Gamecock Athletics: Where Are The Women?

I doubt any USC students noticed

They did..they just thought it was spelled correctly.

And were laughing ’cause all the other jerseys were wrong.

guy or girl, who cares as long as he/she keeps splitting the uprights this season!

Skinny as he is, it’s a wonder it doesn’t say “Carol”

Clowney must have made that jersey