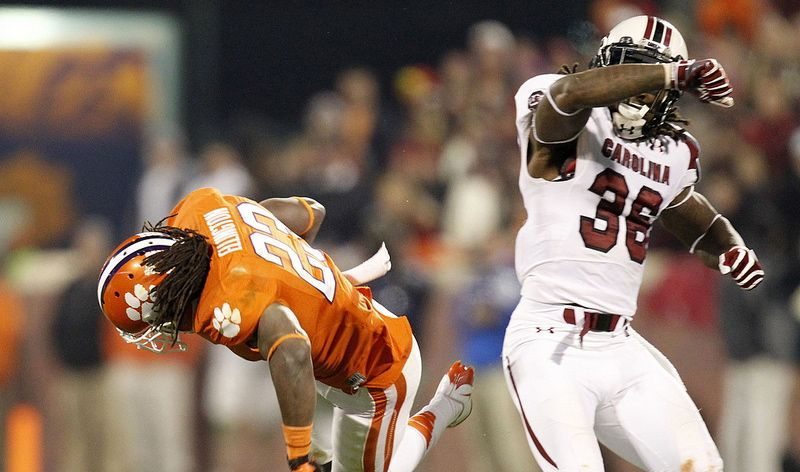 The National Football Foundation has released a primer on the eight most significant NCAA football rules changes enacted prior to the 2013 season. This list includes the infamous “targeting fouls” rule changes – in which players can be ejected from games for hits deemed to be especially vicious.

“We want to protect the game and to help reduce critical injuries with this message: play the game hard but stay away from serious fouls,” says Rogers Redding, national coordinator of college football officiating. “By making changes, we are signaling that the safety of the student-athlete stands at the very top of our list of priorities. The clear intent is to change player behavior.”

Another silly rules change? One requiring the color of uniform numerals to “contrast” with the color of a jersey.

“Teams will not be allowed to wear black numbers on black jerseys,” Redding notes.

This is a new rule? Really? Because the last time we checked it has been enforced on several prior occasions – including the University of South Carolina’s 2011 game against Auburn.

Players will automatically be disqualified from the game for targeting fouls, including (Rule 9-1-3) targeting and initiating contact with the crown of the helmet, and (Rule 9-1-4) targeting and initiating contact to the head or neck area of a defenseless opponent with the helmet, forearm, elbow or shoulder.  The foul itself has not changed.  These plays have been illegal for a number of years, but the penalty has been stiffened to include automatic ejection plus the 15-yard penalty.

3. Offensive Blocking Below the Waist Rule:

4. Expansion of the 10-Second Runoff Rule:

In 2013, if a player is injured within the last minute of a half, and this is the only reason for stopping the clock, the opponent may choose to have 10 seconds subtracted from the game clock.  The injured player’s team can preserve the 10 seconds by using a timeout.

5. Player May Remain in the Game Via a Timeout After Helmet Comes Off:

The rule requiring a player to leave the game for one down if his helmet comes off has been modified to allow a player to remain in the game if his team is granted a charged timeout to adjust the player’s helmet.

6. Minimum Time to Spike the Ball for Another Play Set at 3 Seconds:

Teams will need a minimum of three seconds from the referee’s signal to “spike” the ball to allow for another play at the end of a half. Teams must still execute the spike, but they will have a reasonable opportunity for another play.  If the clock shows one or two seconds, they will only have enough time to run a play without first spiking the ball.

7. Procedures for Changing Jersey Numbers During a Game:

If a team wants to use a player at two different positions during the game, and they need to change jersey numbers, the player must report to the referee who will in turn announce the change. In addition, two players who play the same position at different times in the game may not wear the same number during the game. For example, two quarterbacks may not both wear number 12.

8. Player Uniform Numerals Must Contrast With the Color of the Jersey: