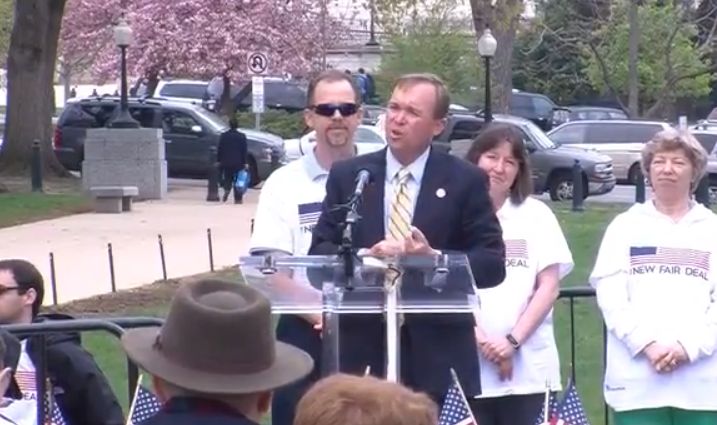 Mulvaney’s amendment proposed a $5 billion cut to a Pentagon account labeled “Overseas Contingency Operations (OCO)” – an account that has been used primarily to fund the wars in Iraq and Afghanistan in recent years. The House Appropriations Committee originally budgeted $5 billion more for the OCO than U.S. President Barack Obama’s requested $80 billion, increasing the total appropriations request to $85 billion.

Mulvaney referred to the additional $5 billion appropriation as a “slush fund” and said that he was simply seeking to “get rid of the money in the war budget that was not war-related.”

The party breakdown of this vote echoed another one this week on an amendment proposed by Congressman Justin Amash (R-Michigan) to strip funding for the National Security Agency’s bulk phone records collection program. While Mulvaney’s amendment narrowly passed due to Democratic support, Amash’s amendment narrowly failed by a 217-205 vote, with a majority of Democrats supporting it and a majority of Republicans opposing it. Both amendments were related to the expansion of a security state and the military-industrial complex in the wake of the September 11, 2001 attacks – an expansion that has become increasingly unnecessary and wasteful.

Fortunately for supporters of civil liberties – every member of S.C.’s congressional delegation voted for the Amash amendment. Unfortunately for those who would like to see a reduction in America’s bloated defense spending, two of S.C.’s Republican representatives – Joe Wilson and Tom Rice – voted against the Mulvaney Amendment. The rest of the delegation – GOP Reps. Trey Gowdy, Jeff Duncan and Mark Sanford, as well Democratic Rep. Jim Clyburn – all backed the amendment reducing the additional money budgeted for the OCO.

Even after the Mulvaney Amendment passed, some of the Republican lawmakers who voted against it tried to gain support for a parliamentary procedure called a “motion to reconsider,” an effort to put the bill up for another vote. Fortunately, that motion failed. Mulvaney did vote to approve the final $594 billion defense appropriations bill, which included his reduction, as did the rest of the Palmetto State’s House delegation.

A recent article in The (Columbia, S.C.) Patch questioned whether this cut – which was in reality a removal of “hidden” money added by politicians in a time of government fear mongering – would hurt the congressman in the next election cycle because Shaw Air Force Base in Sumter, S.C. is located in Mulvaney’s fifth congressional district.

Mulvaney’s predecessor (and the man he defeated in 2010) – long-serving incumbent Democrat John Spratt – leveraged his position as chairman of the House budget committee to bring more than $120 million in federal projects to Shaw Air Force base during his 28 years in Congress. Spratt’s name is even emblazoned on a large $5 million building on the base, The John M. Spratt Education Center.

Mulvaney’s platform, on the other hand, has focused on a reduction in federal spending across the board, even when some short term pain is felt in the fifth district and fewer projects – like the John M. Spratt Education Center – are awarded to it.

In the face of criticism about reductions in military spending, Mulvaney has said “if the cuts force us to look for better ways of saving money in the future, they will be a success.” And as Mulvaney told Patch, “this ($5 billion) wasn’t money that generals asked for, this was the politicians on the (House appropriations) committee putting money in.”

I believe Mulvaney deserves credit. He is fulfilling the promise he made when he defeated a powerful sitting representative for his seat at the congressional table.

Mulvaney’s recent amendment represented a sensible cut to a bloated military spending provision – one that will not hurt America’s essential defense needs nor our men and women in uniform.

Accordingly, it should not hurt him in his re-election bid in 2014. Those who are angry with Mulvaney for this amendment – regarding funding which was not even proposed by the administration but added by opportunistic legislators – should take a moment to step back and look at the sparkling Spratt Education Center building on Shaw Air Force Base and wonder if its construction was a wise use of their federal tax dollars. They should look at the hundreds of other federal projects that the previous congressman brought to the base and the fifth district and wonder the same thing.

I am a native of Sumter, S.C., and I know Shaw Air Force Base well. But when I look at large, expensive buildings emblazoned with the name of my former congressman – buildings paid for with federal money tucked into defense spending bills – I can’t help but think that the money would be better spent elsewhere, if spent at all.