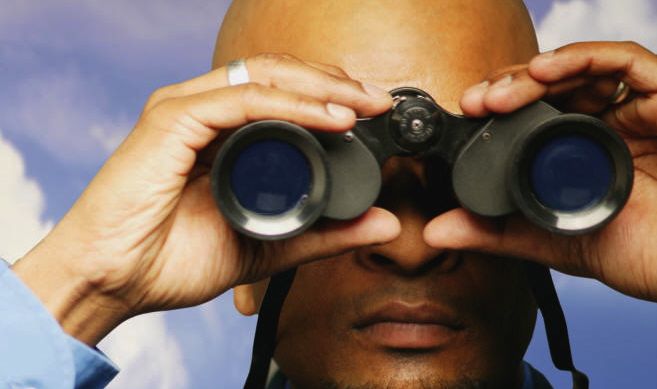 Last night I had a discussion with a close friend after he posted this political cartoon on his Facebook wall: 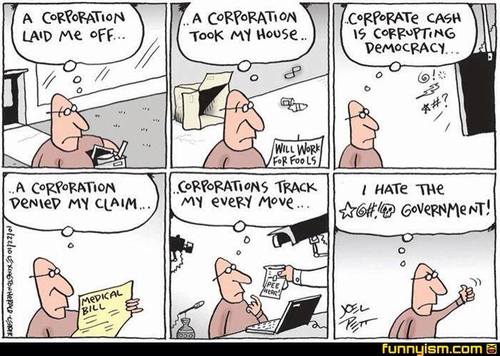 The caption accompanying the cartoon read: “Government is public. You can control and vote on what you do not like. Corporations are private, you have almost no control.”

The cartoon is self-explanatory to anyone who has been following the recent revelations that the National Security Administration (NSA) has been collecting phone and internet data on millions of Americans for years as part of a massive national security dragnet under the guise of the Foreign Intelligence Surveillance Act (FISA).

The cartoon is an excellent example of what many, especially those whose views tend to fall on the left end of the political spectrum, have been struggling with as this security saga unfolds – is our elected government really the bigger enemy to true liberty, or is it the corporations that run – and in many cases, ruin – the lives of Americans every day?

The federal government bailed out the powerful and “too big to fail” banking and automotive industries during the nationwide economic collapse that we are still reeling from, but it failed to help millions of Americans who were struggling with payments on sub-prime mortgages that they were encouraged, by government, to take on in the name of increased home ownership, resulting in nationwide foreclosures by private mortgage companies on individual homeowners, many of whom were trying desperately to make payment arrangements to hold on to their homes.

In its 2010 Citizens United decision, the Supreme Court of the United States held that corporations could spend their own money to support or oppose political candidates through independent communications such as television ads, effectively establishing them as “people” whose First Amendment right to “free speech” in the political arena could not be violated. The ruling was significant because it removed the previous ban on corporations and organizations from using their funds for direct advocacy, freeing them to expressly endorse or call to vote for or against specific candidates – actions that were previously prohibited.

Thus, corporations hold huge sway over our government, in addition to our every day personal lives. Corporations decide who gets hired and fired, who gets foreclosed upon, who may get elected, whether you get the medical treatment you need, and which targeted ads you see on your computer screen through keyword tracking algorithms. And while we may have no real recourse against a private corporation, as citizens in a representative democracy, we do have recourse against our elected officials – we can vote them out.

As so many Facebook arguments related to politics go, things got really heated really fast. My friend – if I understood his argument correctly – insisted that corporations’ unchecked power over people and the government is more insidious than what is happening to Americans’ privacy in the name of national security. He said that pitting the government’s abuses against corporations’ abuses and deciding that the government was worse was a false dichotomy, for all of the reasons I gave above.

I insisted that when our government is doing the things it tells us it’s not doing (see NSA Director James Clapper’s less than truthful Congressional testimony about data collection on Americans from March of this year), then we actually don’t have the accountability from government we should have because we don’t know what’s happening to us and can’t act to correct it with our votes. In fact, in many cases, the representatives who approved the laws under which these top secret surveillance programs operate weren’t fully briefed on what they were voting on and also contend that the executive is going beyond the letter of the law. When that happens, how do we obtain accountability for what I believe is a gross violation of our Fourth Amendment rights against unreasonable searches and seizures without probable cause?

Additionally, the government has a tool at its disposal that corporations, for all of their admittedly bad acts, do not – the legal use of force and detention against its citizens. People like Senator Lindsey Graham (R-S.C.) and Representative Peter King (R-N.Y.) have called for the arrest and prosecution of NSA whistleblower Edward Snowden in the name of national security. Even more frightening, yesterday King called for the arrest of Glenn Greenwald, the reporter for the UK-based Guardian newspaper who interviewed Snowden and first revealed the NSA’s internet surveillance program, PRISM. This, on the heels of the Justice Department spying on the Associated Press and Fox News reporter James Rosen, should be terribly disconcerting to anyone concerned with civil liberties, regardless of political affiliation.

My friend and I have agreed to disagree on this issue, and he has since removed the entire post and argument from his Facebook wall. Politics does not happen in a vacuum separate from relationships, but we are not willing to sacrifice a friendship over this difference of opinion. It remains, however, a huge difference.

As I have said before, those who were critical of the Bush administration’s intelligence-gathering policies should be just as critical of those adopted by the Obama administration. Both presidents were re-elected while these programs were ongoing. Had Americans known what was really going on, I don’t know if the outcomes of those elections would have been any different. A new Washington Post/ Pew Research Center poll suggests that Americans are willing to accept some encroachment on their constitutional rights in an effort to continue this “war on terror” we’ve been fighting for over a decade. But if we had known then what we know now, at least the electorate would have been more informed. And to me, true accountability of our government to the people it governs can only happen when those people actually know what’s going on – and do something about it.