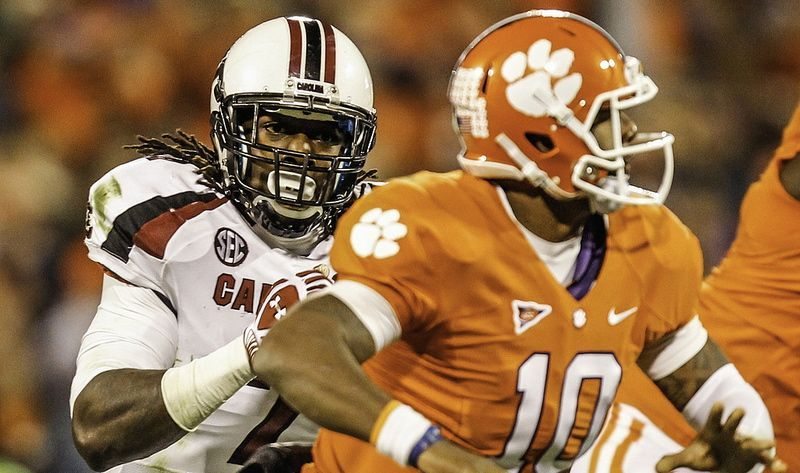 Remember Phil Steele? He’s the “highly respected (college football) prognosticator” who predicted the Atlantic Coast Conference would “get the best” of the Southeastern Conference on Rivalry Weekend last fall. Oh, and that Clemson University would get “triple revenge” on head coach Steve Spurrier’s University of South Carolina Gamecocks.

Not only that, Steele went so far as to say it “would not shock” him if 6-5 Georgia Tech upset third-ranked Georgia …

How did Steele’s predictions of ACC dominance pan out? Not so well. Our founding editor on the other hand? He just about hit the nail on the head …

Anyway, Steele got something right this week when he named USC defensive lineman (and 2013 Heisman Trophy candidate) Jadeveon Clowney to his first-team All-America squad. Obviously Steele’s selection of Clowney is a no-brainer (i.e. something people with limited faculties can accurately ascertain).

As a sophomore, Clowney recorded a school record 23.5 tackles for loss and a school record 13.0 quarterback sacks en route to becoming a unanimous first-team All-American. His season was punctuated with this highlight reel hit against Michigan’s Vincent Smith in the 2013 Outback Bowl.

Clowney is the best player in college football. Period. Had he been eligible, it’s likely he would have been this year’s No. 1 NFL draft pick – while the 2014 draft is already being referred to as the “Clowney Derby.’

“The Hand” Talks To Michael Jackson?