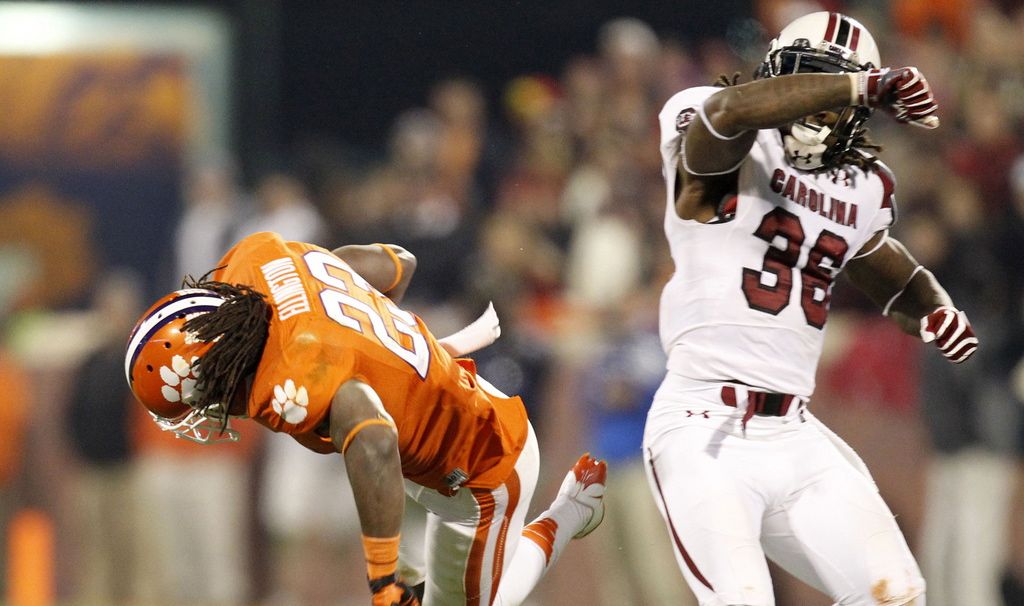 Last week a friend of ours forwarded us one of those ESPN articles that you have to pay $7.95 per  month (or $40 per year) if you want to read in its entirety.  The article was entitled “ACC Will Top SEC This Weekend” and it was written by Phil Steele, a “highly respected prognosticator” who publishes one of those annual college football preview magazines.

Fortunately, someone who paid $7.95 per month (or $40 per year) to subscribe to ESPN “Insider” copied and pasted this article to a Clemson University fan forum, from which several salient points were gleaned.

“The ACC will get the best of the SEC this weekend,” Steele predicted.

Regarding No. 4 Florida’s matchup against tenth-ranked Florida State, Steele observed that “despite the fact the Gators are ranked higher and have the strength of schedule edge, the Seminoles have huge advantages here and they start on the offensive side of the ball.”

“Even if Florida quarterback Jeff Driskel returns at full strength, the Gators are just too one-dimensional to keep this one close as the Noles, who have won the past two games in the series by a combined 52-14, make it three straight here,” he predicted.

Regarding No. 12 South Carolina’s showdown against No. 11 Clemson, Steele once again bet on the ACC – picking Clemson to end a three-game losing skid against their arch-rivals from Columbia, S.C.

“I think the Tigers end the streak in a big way this year,” he wrote, noting that “there may be no hotter team in the country right now than the Tigers, winners of seven consecutive games.”

Nonetheless, Steele predicted that Clemson would get “triple revenge” on USC and stake its claim for “an at large BCS berth.”

Finally, Steele warned that the unranked Georgia Tech Yellow Jackets – who entered last weekend’s rivalry weekend against No. 3 Georgia with a 6-5 record – were a “dangerous two-touchdown underdog” against the 10-1 Bulldogs.

“While I think the Bulldogs may pull it out in the end, it would not shock me one bit to see a huge upset here,” Steele predicted.

How did those predictions pan out? Ouch … ouch … and ehhhhhh.

Looks like when it comes to sports prognostication, you might consider betting on our founding editor instead of Steele.

Shaw Will Start Against Kentucky

Look at the picture–tells you all about the douche you need to know.

Without Andre Ellington, and possibly Tajh Boyd next year they come to Billy Brice. Can anyone say FIVE in a row?

As long as they keep Dabo around. Lord, Clemson, don’t you ever fire Dabo!

“The ACC will get the best of the SEC this weekend,” Steele predicted.

What did we learn in the ACC in Week 13? Glad you asked.

SEC > ACC. And it is not even close. It was a disastrous weekend for the ACC in its head-to-head matchups against the top conference in all the land, going 0-4 on a pitiful Saturday. The average score in those four ACC-SEC matchups was not pretty: SEC 40-19. And it was the first time since 2009 that Clemson, Florida State and Georgia Tech all lost their in-state rivalry games.

Dabo Swinney and Clemson were manhandled on their home turf by SEC foe South Carolina.

After a weekend in which the ACC went 0-4 against its SEC rivals, the ACC finished the regular season in an all-too familiar place in the BCS standings — ranked one spot behind irrelevant and two spots ahead of no man’s land.

Florida State dropped out of the top 10 after its loss to Florida and fell to No. 13, one spot ahead of No. 14 Clemson. Technically, the Tigers are still eligible for at-large BCS bid, as they qualify because they’re in the top 14, but the reality of the situation is that a two-loss ACC team is far less appealing than any of the others ranked ahead of them. The computers will never be understood, but because of this weekend’s results, it’s a moot point now.

The ACC more than likely lost its opportunity at two BCS bowl teams, and it proved in Week 13 that it didn’t deserve it anyway.

When will everybody learn that the worm has turned? Mongoloids like CNSYD are quiet now because once again they’ve been bludgeoned by reality, but they’ll be chirping away next November after Clemson runs through the ACC, acting like that actually means something these days. The media will blather about gaudy stats, high-octane offenses, and Heisman hopes — and then USC-original will slaughter Clemson again, even if with its second string. 2014? Repeat. Same for Georgia. After ‘Bama jail rapes Geoergia in the contest of the SEC-West champion vs. the team that USC-O beat by four touchdowns, Georgia will end up playing Clemson in the Chick-fil-a Bowl. And some people will actually bet on Clemson winning.

clemson can only hope its UGA. other predictions show the taters playing LSU. Dabo is just praying for a lesser bowl so that he doesnt get ass raped by another SEC team.

In other news–West Virginia scored another touchdown on Clemson!!

A poster on Shakin’ the Southland — a Tater site — wondered if Clemson and USC would face a rematch in the Chick-fil-a Bowl. One of their regular posters and an over-the-top Clemson devotee said, “Why would we want to give the Gamecocks a 5th straight win over us any sooner than we have to?”

Hilarious. They’re already throwing in the towel for 2013. As well they should.

Okay Fits, you told us over a month ago about the thugs at sc selling drugs and doing Roids. Well, where is the story. If you can’t beat them, at least expose them for being scum. It’s obvious the sc fans have sold their souls to the devil and are so starved that they will beat their chests over these thugs as long as they win. Most of their starting defense is an embarrassment to anyone that ever sat in a classroom at sc as they can’t even speak English and have dragged any USC degree through the mud. With that being said, let’s see the mud you supposedly have on them. The Roid problems have been there before and it’s obvious that they are juicing again. I don’t blame them as that is how the game is played in the SEC.

Show me fits. You are always spewing accusations. Prove it.

Prove what? That you will hold one in your mouth till the swelling goes down!!!

brian you are an idiot. your big bad ass sammy potkins is smoking more dope than cheech and chung combined, and popping pills to boot all while driving, and now you want a fits story to be true? this is the same place that said brad scott payed for Watkins’ family to go to the 5 star resort in Florida. if you cant beat em expose em. more like if you cant beat em cry like a little bitch. Just maybe instead of driving 65 in SC dabo might want to score 65 against them. he hasnt in years combined by the way. hahaha CU next year

He has bashed Spurrier and made fun of USC fans…while most of last year drinking the Orange Kool-Aid Clemson National Championship Bu!!S#!#…Much of the punch-drunk columbia media does the same thing year after year..@$$ kicking after @$$ kickin….

FITS, I know what you are…but it still Sickens me to see you Lie about it…

Clowney is borderline mentally retarded but one hell of a player though. Great for all that hold a sc degree.

what ever idiot. take your beating like a man at least. if you cant beat em cry like a bitch

Do you hold a four year Clemson degree, or one of those associate ones from before it was a “university”? Is Animal Husbandry still popular up there because of the exciting lab work? What a joke to crow about the academics of just about any state school. Good for you though, if you are really that proud. Couldn’t get into W and L?

just so you get it, im calling you a pussy

You’re right I am a little baby

Don’t take it out on me. Just telling you what an educator in Rock Hill told me. Said he was given grades his last year just to be eligible and was borderline. Hell, I wish he played for my team but just stating that he is not college material but somehow cutting it at sc to stay eligible.

You are aware of how many laws that educator you mention in Rock Hill has broken if in fact he did it as well, or even if knew about it and didnt report it, and not to mention for telling you about a students personal files right? I am sure its all BS from you but I would tell said educator you just told on him and accused him of unlawful acts as well. it is true he sould protect himself with a lawyer.

Not worried about person being revealed. Google New York Times article and it quotes coaches at Hargrave and other prep schools talking about his transcript looking like a non-qualifier before signing day.

differnt then you in being a qualified DUMBASS