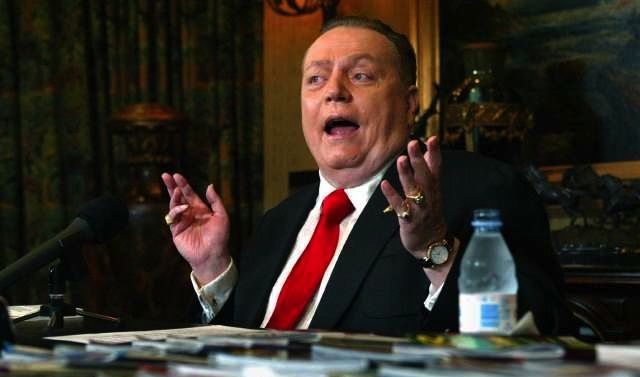 Larry Flynt – publisher of the pornographic magazine Hustler and the inspiration for the movie The People vs. Larry Flynt – has endorsed the congressional candidacy of former S.C. Gov. Mark Sanford.

And no, we’re not making this up …

“No one has done more to expose the sexual hypocrisy of traditional values in America today,” Flynt said of Sanford, according to an exclusive story published by The Hollywood Reporter. “He is the man of the hour – the midnight hour. He has demonstrated by his words and deeds that traditional values are shameful and that he will not live by such rules. As the bible teaches us: ‘Ye shall know them by their fruits.'”

Sanford’s campaign refused to comment on the Flynt endorsement.

“No, nothing, no,” Sanford spokesman Joel Sawyer told FITS, although he did confirm that any contributions sent by Flynt would be returned.

While Team Sanford was tight-lipped, Flynt was literally pouring forth with commentary.

“Sanford’s open embrace of his mistress in the name of love, breaking his sacred marriage vows, was an act of bravery that has drawn my support,” he said. “His attack on sexual hypocrisy is the only issue in this campaign. It is what defines Mark Sanford. Placing sex at the top of the agenda, he continues his courageous fight, demanding forgiveness while brazenly hugging his mistress at campaign parties.”

Flynt began publishing Hustler nationally in 1974. Four years later he was permanently paralyzed when a white supremacist shot him outside of the Gwinnett County Court House in Georgia – where Flynt was attending an obscenity trial.

The shooter is said to have objected to an interracial photo shoot in Hustler.

Oddly enough, this isn’t Flynt’s first foray into Palmetto politics. In early 2010 he ripped U.S. Rep. Joe Wilson in an editorial published in his magazine, while several months later he claimed to know the identity of a homosexual U.S. Senator (widely presumed to be U.S. Sen. Lindsey Graham).