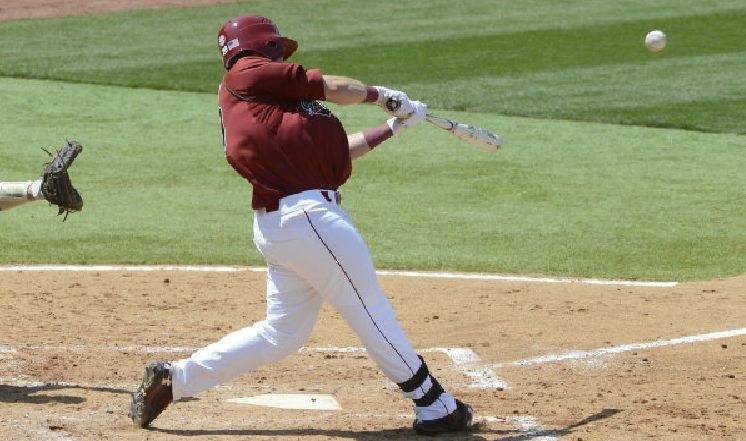 Senior first baseman LB Dantzler hit a two-run homer and freshman left-hander Jack Wynkoop tossed eight innings of one-run ball to lead the fourteenth-ranked University of South Carolina baseball team to a 3-1 win over Kentucky Sunday – and a series sweep of the No. 17 Wildcats.

Dantzler’s blast – his twelfth of the season – traveled an estimated 410 feet to straightaway center field at Carolina Stadium.

The Gamecocks (31-10, 11-7 SEC) needed these wins in the worst possible way after getting swept earlier this month by conference rival Florida.

“You just have to pick yourself back up off the mat,” first-year head coach Chad Holbrook said of his team’s resilience. “I am proud that they haven’t let it go south. They have fought like crazy to get back in this thing and to keep us in the conversation of doing some things later in the year.”

Of course they won’t be celebrating for long as the road ahead gets incredibly rocky. After a non-conference game against Gardner-Webb on Tuesday in Shelby, N.C., the Gamecocks travel to Baton Rouge, Louisiana for a three-game series against third-ranked Louisiana State University. After that, they welcome Vanderbilt – the nation’s No. 2 team – for a three-game series in Columbia.

USC has peaked down the stretch in each of the last three seasons under former head coach (and current USC athletics director) Ray Tanner – advancing to the finals of the College World Series each year. In 2010 they defeated UCLA to capture the school’s first national championship in a major sport, while in 2011 they defeated Florida to claim their second consecutive title. Last year USC was defeated in the finals by Arizona.

Carolina And Clemson: Believe The Hype