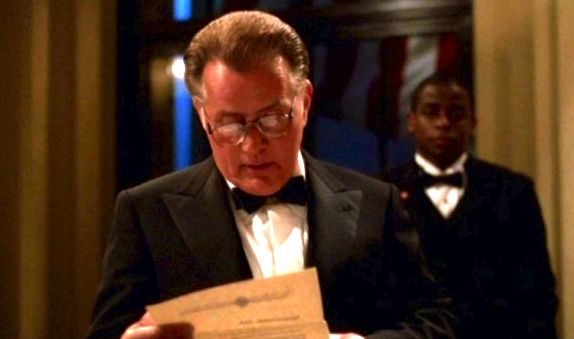 It is a testament to the genius of screenwriter Aaron Sorkin that in moments of import many people turn not to the real President of the United States, but to the President created by Sorkin for his hit 1999-2006 drama The West Wing.

In the wake of this week’s terrorist attack in Boston, Massachusetts, a poignant clip from the show’s fourth season premiere has been making the rounds – a clip featuring fictitious U.S. President Josiah “Jed” Bartlet (portrayed by Martin Sheen) addressing a terrorist bombing.

“They’re our students and our teachers and our parents and our friends,” Bartlet says of the bombing victims. “The streets of heaven are too crowded with angels, but every time we think we have measured our capacity to meet a challenge, we look up and we’re reminded that that capacity may well be limitless.”

Of course before you get completely swept away it’s important to remember America has provoked “assaults” on its freedom and its way of life. And we have “invited” a confrontation with evil … (several of them, actually). How did we do that? By pursuing an interventionist foreign policy our nation cannot afford – in lives, dollars and consequences.

Aside from that, though, it’s hard to argue with the premise that “the true measure of a people’s strength is how they rise to master” assaults on life and liberty like the one launched in Boston.

Unfortunately, America has fucked that up too … choosing to degrade individual liberty in the name of a security that clearly remains elusive.

It’s important to find out who attacked our citizens. It’s even more important to hunt them down and kill them.

Or, as Bartlet says in another West Wing episode, “I’m going to blow them off the face of the earth with the fury of God’s own thunder.”

But what Obama and other leaders in Washington, D.C. cannot do is use this attack as another excuse to impose the “Bush doctrine” – i.e. invading other nations on wafer thin intelligence as part of a broader “War on Terror.” Nor can we use it as another excuse to further erode our liberties.

Such responses would not “master the moment.” In fact they would provoke many, many more such moments in the future … of course that could very well be the idea.

After all, as former White House chief of staff Rahm Emanuel once said, “never let a crisis go to waste.”