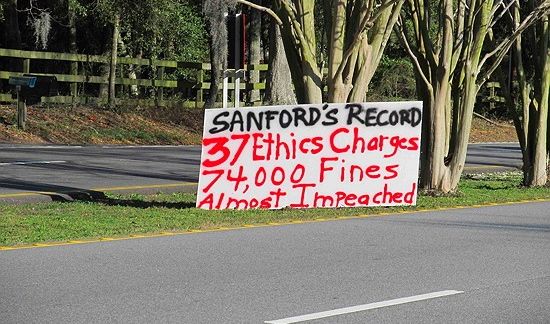 Remember those spray-painted “Sanford for Congress” signs? The ones touting his “fiscal conservatism” in such a folksy, homespun way?

Yeah … apparently those cut both ways.

Opponents of the former governor (and current candidate for the South Carolina first congressional district) have taken it upon themselves to erect their own “do-it-yourself” signs in an effort to draw attention to the scandal which nearly cost the former governor his job.

“Sanford’s Record: 37 ethics charges, ($) 74,000 Fines, Almost Impeached,” reads one of the signs, a photo of which was submitted by a reader of The (Charleston S.C.) City Paper.