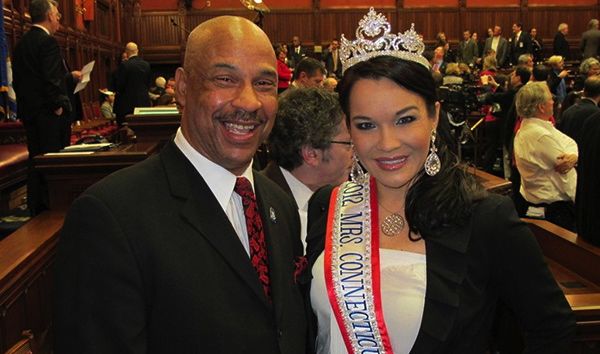 We’ve never heard of the Connecticut Science Center. We presume it’s one of those totally unnecessary K-12 government expenses which gets funded because cute teenage girls come to testify to leering lawmakers about how important it is – which is exactly what happened this week in the Nutmeg State.

“I am usually a very shy person, and now I am more outgoing,” one of those girls testified. “Now I like to just jump at any opportunity I can get.”

That remark apparently got the attention of Deputy Speaker Ernest Hewitt, a black Democrat who represents New London in the Connecticut State Assembly.

“I was able to teach those children about certain things like the snakes that we have,” the 17-year-old girl continued, saying that one day she wanted to make a career out of “working with children.”

“I never liked snakes, but now they’re my best friends,” she said.

At this point, Hewitt couldn’t contain himself any longer …

“If you’re bashful, I got a snake sitting under my desk here,” he told the girl.

Courtesy of The (New London) Day, take a listen …

“Representative Hewett’s offensive remark was a disgrace and an embarrassment,” Connecticut GOP chairman Jerry Labriola Jr.. “The fact that it was made to a 17-year-old intern visiting the state Capitol to attend a public hearing sends an absolutely atrocious message.”

Yeah … but Hewitt is a black Democrat, which means there will be no national outcry over his comment and any effort to force him to resign will be … wait for it … racist.

UPDATE: According to The Day, Hewitt has been stripped of his post as Deputy Speaker as a result of his offensive comment.