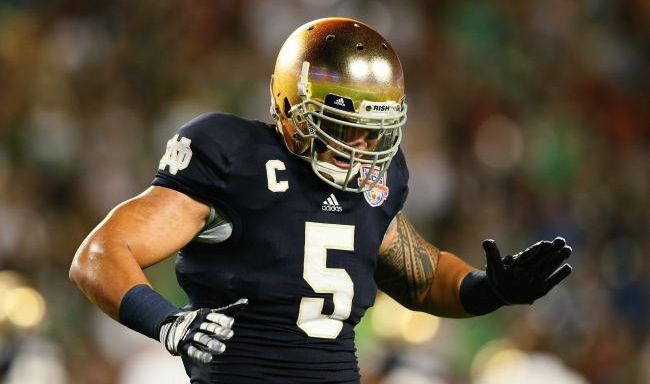 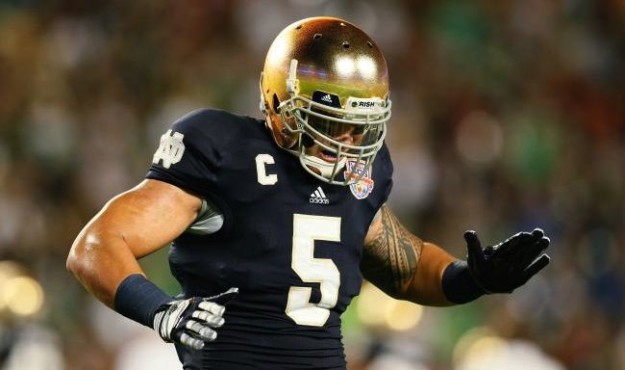 THERE WAS NO “DEAD GIRLFRIEND”

But is Te’o also a liar?

The website Deadspin claims T’eo’s inspirational story about overcoming the adversity of losing both his grandmother Annette Santiago and his girlfriend Lennay Kekua during the 2012 season is nothing but an elaborate hoax. Or at least the “dead girlfriend” part of it was …

From the website’s seismic report:

Manti Te’o did lose his grandmother this past fall. Annette Santiago died on Sept. 11, 2012, at the age of 72, according to Social Security Administration records in Nexis. But there is no SSA record there of the death of Lennay Marie Kekua, that day or any other. Her passing, recounted so many times in the national media, produces no obituary or funeral announcement in Nexis, and no mention in the Stanford student newspaper.

The photographs identified as Kekua—in online tributes and on TV news reports—are pictures from the social-media accounts of a 22-year-old California woman who is not named Lennay Kekua. She is not a Stanford graduate; she has not been in a severe car accident; and she does not have leukemia. And she has never met Manti Te’o.

The Deadspin reported goes on to lay out an extensive timeline of Te’o’s “relationship” with the nonexistent woman – strongly suggesting that the story was concocted in an effort to generate publicity for the star linebacker (who finished second in the 2012 Heisman Trophy vote).

According to officials at Notre Dame, Te’o is the victim – not the perpetrator – of the hoax.

“On Dec. 26, Notre Dame coaches were informed by Manti Te’o and his parents that Manti had been the victim of what appears to be a hoax in which someone using the fictitious name Lennay Kekua apparently ingratiated herself with Manti and then conspired with others to lead him to believe she had tragically died of leukemia,” the University stated.

“This is incredibly embarrassing to talk about, but over an extended period of time, I developed an emotional relationship with a woman I met online,” he said. “We maintained what I thought to be an authentic relationship by communicating frequently online and on the phone, and I grew to care deeply about her. To realize that I was the victim of what was apparently someone’s sick joke and constant lies was, and is, painful and humiliating.”

Despite his poor performance in the 2013 national championship game, Te’o remains a likely top ten pick in the 2013 NFL draft. Obviously how this matter is resolved will go a long way in determining his future. If Te’o really was the victim of a hoax, as he claims, then it’s likely he will pick up public support. If it turns out he was in the publicity stunt, he stands to lose millions of dollars in endorsement money.

What do you think happened here? Vote in our poll and post your thoughts in our comments section below …

what WASN’T a hoax was Eddie Lacy running him over like a bull.

He wasn’t the victim of anything. It was all orchestrated. F*cking scumbag!

WTF is this world coming to?

Notre Dame’s AD is having a press conference at 8:00. You can watch it live on their website. I’ll withhold judgement until I have more facts.

GOTTA have that PUBLICITY if you’re gonna be a WINNER!

Exactly. If true, this one goes a bit beyond changing how the name Theismann is pronounced.

Two facts.
Teo is most overrated player this year.
His non existent girlfriend was killed by Lance Armstrong.

There is nothing under the sun that can eclipse sports fanatics insatiable desire to make chicken salad of chicken shit.

Don’t get me started. No half ass new half time ACC team would ever have a fake story about anything. They have should good character and all.

Smells just like the SAT Hoax, the doped fueled USC Football Hoax, and I gotta Book Coming Out Hoax!

I hear that Manti Te’o frequently refers to himself in the third person. Sound familiar?

and the 5 star resort for the Clemson players family resort hoax, but this one actually made national news

Hmmm…how do we spin this to favor the SEC???

Damn. I guess that means Manti Te’o’s boogers can’t cure cancer after all.

I’ll take the over…the waaaay over.

Manti can’t be much of a Mormon if he only has one fake girlfriend.