IS A CORRUPT BARGAIN IN THE WORKS TO EXTEND S.C. CHIEF JUSTICE’S REIGN?

S.C. Chief Justice Jean Toal is privately urging legislative leaders to amend a state law requiring judges to retire at seventy-two years of age, sources tell FITS.  In fact we’re hearing increasing chatter from our sources in both the legislative and judicial branches that Toal may have offered the state’s “Republican” leaders a quid pro quo in exchange for passing such a law.

What did Toal allegedly agree to do (or not do) in exchange for lawmakers amending this retirement statute?  We’ve been unable to confirm the “quid” at this point, but we’ve heard from multiple sources that a secret deal is in the works that would enable the former liberal activist to extend her tenure beyond its current limit of three years.

One source claims the deal involves a “major case” currently before the court, although they declined to specify the ruling – or what decision lawmakers were seeking from Toal. 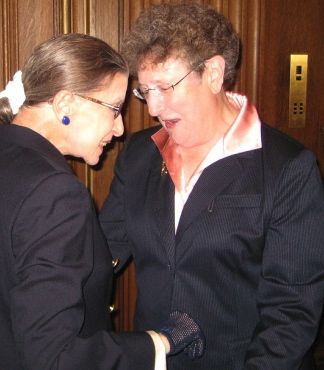 If the current law stands, Toal will not seek a new term in 2014 because she would be forced to step down at the end of the following year.  If the age limit is repealed or extended, however, she would seek another term.

“She’s not ready to retire,” one source told us, adding that in addition to her leverage on current cases Toal has “accumulated a lot of IOUs from powerful legislators” over the years.

“Generally speaking what she wants, she gets,” the source added.

Toal has repeatedly demonstrated her susceptibility to corruption – as evidenced by the infamous 2007 bar exam scandal (broken exclusively by FITS) as well as the ongoing shadiness demonstrated by her Office of Disciplinary Counsel.  She’s also had several traffic incidents allegedly involving alcohol.

Technically Supreme Court Justices (and other judges) in South Carolina can work past the age of 72, but if they do so they forfeit their ability to participate in the state’s retirement system.

As we’ve stated on numerous previous occasions, the election of judges by the S.C. General Assembly is an inherently corrupt process that should be immediately discontinued.  We believe judges should be appointed by the state’s chief executive with the advice and consent of the State Senate.

UPDATE: Well, well, well … unbeknownst to our sources on this story (but knownst to us), legislation has already been pre-filed for the upcoming session of the S.C. General Assembly which would completely remove the 72-year-old age limit for South Carolina justices and judges.  The bill – S. 71 – is sponsored by Democratic State Senator Gerald Malloy.