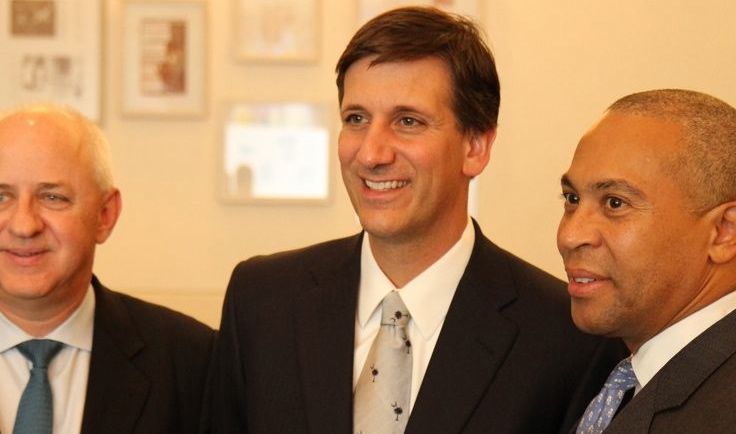 GOVERNOR TRAILS DEMOCRATIC RIVAL IN THE “REDDEST STATE IN AMERICA”

South Carolina is the reddest state in America (in more ways than one), but if the election for governor were held today State Senator Vincent Sheheen would turn it blue.

Haley’s team remained confident, though, with her campaign manager Tim Pearson telling The (Columbia, S.C.) State newspaper that “when it comes time for us to reenter the political ring with him, the results will be just as bad for Vince as they were last time.”

Maybe so … but Haley has a bruising road ahead of her if she wants to earn another four years.

Straight ticket voters were the key to Haley’s uninspiring 51-47 percent victory – bailing her out of a race she otherwise would have lost.  In June 2010 Haley was up on Sheheen by a whopping 21 points – but she coughed up the vast majority of that advantage in a disastrously managed general election campaign.

In the two years she’s been in office, Haley’s position hasn’t improved – even though the state’s unemployment rate has been on the decline.

“Nikki Haley won by an underwhelming margin in 2010 given the strong year for Republicans nationally,” said Dean Debnam, President of Public Policy Polling. “Since then she’s proven to be an unpopular Governor, and the political climate has gotten better for Democrats. Put those things together and she’s looking very vulnerable for 2014.”

Haley would still win a GOP primary, although 37 percent of Republicans say they would “prefer someone else” to be their nominee in 2014.

PPP is a Democratic-leaning firm based in North Carolina, although its Palmetto State results have proven remarkably reliable in recent elections.  The firm surveyed 520 South Carolina voters from December 7-9, and its poll has a margin of error of plus or minus 4.3 percent.

Sheheen should have a bigger lead than that, but it’s a good start. By the time she makes her way through a primary and runoff, she will either not be the nominee or will be even more vulnerable.

I’m thinking at least three and half million hacked South Carolina voters want her out!

She has been a complete fraud!

PPP also dropped the results of the GOP primary for Graham’s seat and also has Gay marriage question results.

Tom Davis is Graham’s weakest opponent followed by Mulvanney, Gowdy and then Tim Scott the strongest, but still at a 54-32 disadvantage.

I could easily see Graham getting pushed into a runoff if two strong primary challengers emerged. If that happened, Graham would be highly vulnerable.

Easier fund raising, all kinds of votes upcoming, plenty of pockets to pick.

When Nate Silver analysed the accuracy of various pollsters after the 2012 election, PPP ranked fifteenth out of twenty-two, with an average error of 2.7% and a Republican bias of +1.6% in polls of likely voters in the last 21 days of the campaign.

There were only four firms that had a net Democratic bias in their polling results.

Oh well, that explains it. I’m sure Nikki is really ahead of Sheheen. What with her stellar management of this state over the last two years!

Groundball, a +1.6 % Republican bias means MORE republicans were polled, on average, than should have been, given the actual vote. If PPP continued that bias into this poll, then Sheheen has an even bigger lead.

BTW, based on the last polls done prior to the election, PPP was the MOST ACCUARATE pollster of 2012.

The Nate Silver review was based on all polling during the 21 days PRIOR to the election, versus the actual results.

It takes a lot for a Republican to loose a spot in this state.

PS: Democrats have been rendered UNFIT, to serve statewide in SC…due to their own actions…

So…SUCK IT…..FITS…you’ll get beaten again if you’re dreaming about Sheheen ..this ain’t a bunch of Dumb@$$#$ and Cheaters like Pa.

As usual the big idio”T” earns his screen name.
YOU BETCHA!
YOU BETCHA!

Haley is rendered fit? Honestly, what color is the sky in your world? And FITS wouldn’t be beaten again, he endorsed Haley last time.

If you support Haley, tell people to suck it, etc., you really have no concept of reality, decency, or desire for SC to succeed. You also know nothing about politics.

But by all means, endorse Haley. You couldn’t get laid in a whorehouse, so keep your losing streak alive by backing the nag.

This is from the same idoit that predicted a Romney landslide throughout October.

If Sheheen had gotten 200k from the Democratic Governors Association, he would probably be Governor now.

What has got to give FITS, and his liberal minions a pants-crap is: If Sheheen can beat her…there is more than one Republican who wilol beat her in a Primary…

NIMRATA and the TEA Party have crapped in the Republican’s punch bowl!
YOU BETCHA!
YOU BETCHA!

Will sign up for that today. Loftis…Sheheen..does not matter. Just get her out.

What could not be done, but should have, this November was remove the incumbent. Has to be done in 2014.

You were wrong on the last election.

And boy, was he ever. BigT, too bad you’re not a betting man…

As a kid growing up in a small lowcountry town, Halloween was pay back time.

Every year there would be at least one and sometimes two/three adults who by their actions deserved a flaming bag of dog shit on their porch.

Timmy, The Eunuch, Pearson is the kinda guy that is a perfect fit for a flaming bag of dog shit.

I know Haley persdonally and Sheheen both.
Haley is a liar and a fraud! Sheheen is a wonderful and capable person and yes I am a epublican; but, have seen far too much of haley and her failures and care too much for this State, I use to serve.
I’m afraid Curtiss isn’t who he needs to be either.
This is one Republican who will vote for Sheheen, cannot vote Democratic at the Federal level, cannot vote Republican, at the State level.
I see Haley and O’Bama as one in the same.

Nice. Sheheen is a good man with integrity while Haley doesn’t know what integrity means. She only knows the definition of self-serving and hurting the tax-payers with all the expenses associated with the hacking of 3.8 million SC social security numbers; SC Savannah River sellout; DEW UI payouts mistakes; and so much more.

I’m voting for Sheheen for Governor.

Nikki Haley is leading the charge for ethics reform — setting the agenda — and Sheheen is playing catch-up. I’ll put my trust in HER to clean up this rotten state!

In which part of the state is this rock you just crawled out from under?

Are you for real Shibboleth?

Nikki Haley IS the leading reason WE NEED ETHICS REFORM in South Carolina!!!