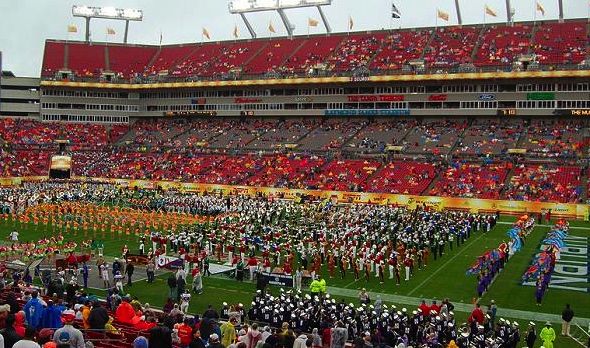 BACK TO OUTBACK?  OR GATOR?

The University of South Carolina football team will likely play either Wisconsin or Northwestern in the 2013 Outback Bowl – no matter who wins next week’s Southeastern Conference (SEC) championship game between Alabama and Georgia.  Or the Gamecocks could wind up in Jacksonville, Florida at the Gator Bowl – depending on whether Outback Bowl officials decide to pick another SEC team ahead of them.

There’s even some talk of a USC-Clemson rematch in the Chick-fil-A bowl in Atlanta, Georgia – although few view that as a realistic possibility.

Here’s what we know: Either the No. 2 Crimson Tide (11-1. 7-1 SEC) or No. 3 Bulldogs (11-1, 7-1 SEC) will play top-ranked Notre Dame (12-0) in the Bowl Championship Series (BCS) national championship on January 7 – with the SEC winner going for the conference’s seventh straight national title.  Meanwhile fourth-ranked Florida (11-1) has already punched its ticket to a BCS bowl game – which means the loser of the SEC Championship is headed to the Capital One Bowl in Orlando (the SEC’s top non-BCS bowl).

After that, things get interesting …

Along with LSU and Texas A&M, the Gamecocks (10-2, 6-2 SEC) are one of three SEC teams with only two losses.  And while it’s conventional wisdom that the Cotton Bowl will pick Texas A&M and the Outback will select South Carolina, Outback officials could pick LSU over the Gamecocks (after all the Bayou Bengals beat the Gamecocks earlier this year – and outrank them in the BCS standings).

If that happens, look for head coach Steve Spurrier’s squad to wind up in the Gator Bowl against a lower-level Big Ten team.

South Carolina is one win away from matching the school record for victories in a season – a mark set last year.  While they obviously want to hit that historic threshold again – they also want to draw the best bowl matchup they can.

USC has history in both the Outback and Gator Bowls.

The Gamecocks won back-to-back Outback Bowls over Ohio State following the 2000 and 2001 seasons (under former head coach Lou Holtz) – but lost to Iowa following the 2008 season under Spurrier.  In Jacksonville, the Gamecocks haven’t fared so well.  USC lost the inaugural Gator Bowl in 1946 to Wake Forest, and then lost three Gator Bowls in the 1980s (versus Pitt in 1980, Oklahoma State in 1984 and LSU in 1987).

Spurrier has guided the Gamecocks to bowl eligibility in seven of his eight seasons in Columbia, S.C. – winning the Liberty Bowl after the 2006 season and the Capitol One Bowl following last season.  However USC has posted losses in the 2005 Independence Bowl, the 2009 Outback Bowl, the 2010 PapaJohns.com Bowl and the 2010 Chick-fil-A Bowl – leaving Spurrier with a 2-4 bowl record at South Carolina.

Spurrier was 6-5 in bowl games during his 12-year tenure at Florida and lost his only bowl game as head coach at Duke.

Which bowl would you like to see South Carolina participate in this season?  Vote in our poll and post your thoughts in our comments section below …

“Four Ever To Thee”

It will be Northwestern, Michigan or Nebraska in the Outback. If Wisconsin does not go to the Rose Bowl, the Capital One and Outback will have to take a team with four losses or fewer ahead of a six loss Wisconsin team. Unless the Big Ten sends two teams to the BCS, which seems extremely unlikely at this point.

I’ll go if it’s in Jacksonville, but not Tampa.

It’s a DANG shame so many undeserving teams eat up legitmate BCS bowl spots (see Clemson, VT, 2011) and the REAL conferences and deserving teams (like the Gameoccks) get bumped down.

Other than the SEC teams, I doubt there is any team in the Top 10 that could beat SC.

The system SUCKS and punishes the BEST, like SC, and lets small-time teams like Clemson get much better bowls than they deserve…

The saving grace is that Teams like Clemson Get Embarrassed if they play a legitimate Top 20 team (see Clemson 2011)….

Man we NEED a playoff..and more than just 4 teams.

I guess USC could always move to a conference where they’d be little more than middle of the pack.

Do you really think Notre Dame, Oregon, or Kansas State would roll over for South Carolina?

Of course if it were more accurate, Clemson would not even sniff the Top 25 w/ that little-boy schedule you play….

How do you Idiots get excited enough to even go to the games at that God-forsaken h#!! hole, knowing that SC is going to EXPOSE you every November…????

BigTurd, I’m sure Clemsuck fans get ready the same as Coot fans do as they prepare to head down to the industrial park for a game.

BigTurd, I also like penises all over my face.

We’ve been Bowl eligible EVERY year under the HBC’s tenure. We’ve been to a bowl game every year in HBC’s tenure with the exception of 2007 though we were eligible at 6-6.

I’d like to go back to the Outback and I’m guessing so does the HBC – we didn’t give it our best effort last time down there. The first two trips were a blast and I’m ready to hit Tampa again and demolish some weak ass Big Ten pretender.

How many new bowls popped up over the past 15 years, it used to be a big deal to go to a bowl, now if you get 6 wins you’re bowl eligible.

If you won 6 on an 11-game schedule before the switch away from Div I/IAA to FBS/FCS, it was a winning schedule and you were bowl eligible, as long as those six were against DI schools. then before teh 12-game sched, for a couple of years, you could in a two-year cycle count one DIAA win as part of your six.
USC has been bowl eligible since Lou Holtz’s last year. We were 6-5. But the Clemson brawl, which the kitties started, put both teams out.

The post states incorrectly: “Spurrier has guided the Gamecocks to bowl eligibility in seven of his eight seasons…” I’m merely pointing out that that statement is incorrect; we’ve been bowl eligible every year in the HBC’s tenure.

We were also Bowl eligible twice during Spanky’s tenure and (inexplicably and thanks to Queen Dixon) turned the offers down.

Who is Brad Warthen and why does he suck?

Carrefour, you ain’t from around here, are you?

brad the best part of you ran down your moms leg

@ ohnonotagain. Also remember the fact that USC was already bowl eligable before the brawl and were the 1st of the two to say becasue of thier actions they would not accept a bowl invite if given. Clemsux and, coach at the time Bowden, needed the win to become bowl eligable and they (Bowden and fans)then cried they should still go to the bowl anyway and they didnt think it was fair that the clemson president also followed USC’s lead and Self-imposed a bowl ban that year. The NCAA never actually said neither team could go. USC decided itself it wouldnt go, and as to not look stupid clemsux agreed only after that. If it were up to them they would have gladly gone back to that crappy boise bluegrass bowl and acted like they deserved to be there.

sorry, once again posting while on hold on the phone at work. poor spelling

Carrefour, Brad really, really wants you to think he is not a Clemson fan, but he is. Besides that, he knows absolutely nothing about college football. The real Brad Warthen knows more.

@Carrefour, He is a pissed off, mid-western malcontent (though he will never tell us what mid-western team he pulls for, that would be a chink in his armor) who walked uphill both ways to school and channels his frustrations of living here by posting on blogs (ie bradwarthen.com), instead of focusing on and resolving the cause of his unhappiness. Joining a bowling league or something might help, but he may have let his bitterness go too far down the root.

That said, he is right about the USC thing. Sadly, they aren’t a SEC contender after being beaten by Florida and LSU (though they have a pie schedule next year and he won’t let anyone forget it when they get SEC east).

As far as the industrial park comment, it is true, but he says it because he enjoys seeing the glass half-empty. Unfortunately he doesn’t realize that he says these things because of latent narcissism. If he let go of some of the anger he could be the pithy/funny guy at the end of the bar instead of pithy/self-righteous guy who offers only rebuke. For him, constructive criticism is for the weak.

whatever bowl it is FITS stay the hell home