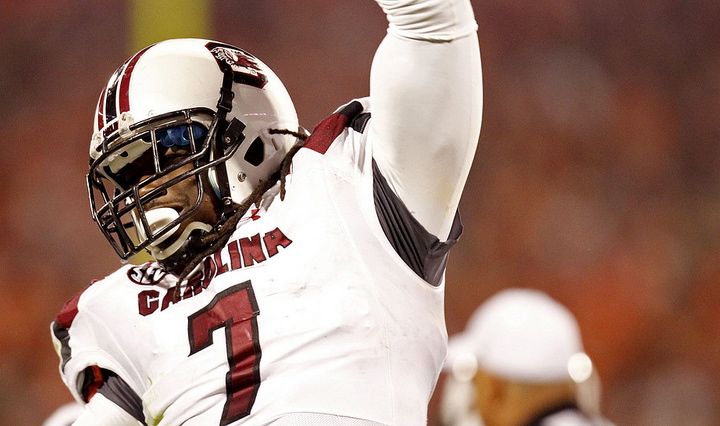 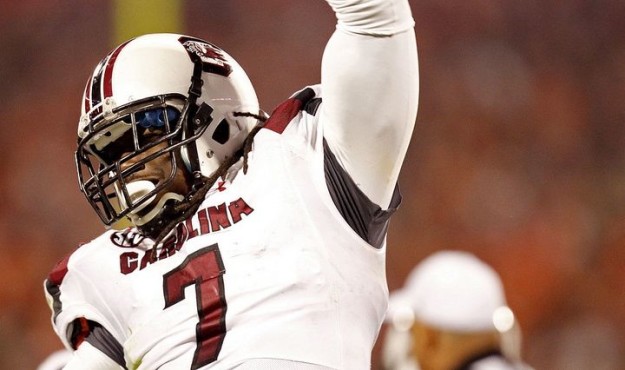 SOUTH CAROLINA’S SENSATIONAL SOPHOMORE IN LINE FOR SOME SERIOUS HARDWARE

While it’s still too early to call him the “next LT,” University of South Carolina defensive end Jadeveon Clowney continues to prove that the lofty praise he’s received isn’t hyperbole.

The “Beast” – as he’s known on campus – is feasting on opposing offenses, and is likely to enter the 2013 season as the top NFL prospect in the entire country.

Clowney – the former No. 1 national high school recruit and 2011 SEC Freshman of the Year – has had a whale of a sophomore season for head coach Steve Spurrier’s Gamecocks.  He currently leads the NCAA in tackles for loss (21.5) – and is tied for the NCAA lead with 13 sacks. Of course Clowney’s numbers only tell part of his story.  He is quite simply the most disruptive force in college football – living in his opponents’ backfield and forcing opposing quarterbacks into making throws like this one …

In addition to his NFL buzz, expect there to be considerable Heisman Trophy consideratioin for Clowney heading into the 2013 season – particularly after his 4.5-sack performance against arch-rival Clemson on national television.  With a renewed focus on the game-changing exploits of defensive stars (Nebraska’s Ndamukong Suh and LSU’s Tyrann Mathieu were Heisman finalists in recent years – and Notre Dame’s Manti Te’o is likely to be a finalist this year), 2013 could be Clowney’s year.

And while it’s hard to imagine him being any more dominant than he’s been this year … remember that Clowney is only 19 years old.

Believe it or not, he’s still learning …

About Those Phil Steele Predictions …