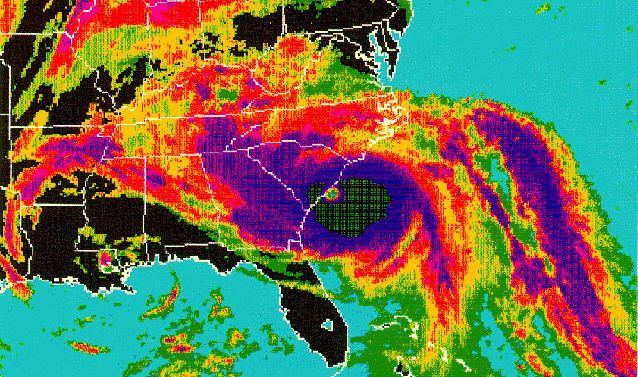 WHAT ON EARTH IS SHE THINKING?

On September 9, 1989, a tropical wave formed off the coast of Africa and was shortly thereafter given the designation Tropical Depression 11.  After two days of strengthening and organization, the system was christened “Tropical Storm Hugo.”  Two days later – roughly 1,200 miles east of the Leeward Islands – Hugo became a hurricane.

After a completing a devastating journey through Guadalupe, St. Croix, St. Thomas and Puerto Rico, Hugo slammed into the South Carolina coastline just north of Charleston, S.C. on September 21 packing maximum sustained winds of 140 miles per hour, a storm surge of 20 feet and an estimated 3,000 embedded tornadoes.

The results were catastrophic.  In South Carolina alone, Hugo did $8 billion of damage (after adjusting for inflation) and killed 27 people.

There wasn’t anything where anyone in state government could have done anything to avoid it.

(We’ll return to those words momentarily).

So … why  was there nothing to be done?  Because Hugo was an act of God – or a phenomenon of nature, if you’re not theologically inclined.  Either way – it was a deadly and destructive force that humankind was powerless to stop.

Of course South Carolina was fortunate at the time to have a leader as its chief executive.  The late Gov. Carroll A. Campbell, Jr.,  who also happened to be a champion for government reform, guided South Carolina through every step of the crisis – carefully and efficiently managing preparation, evacuation and recovery efforts with a calm poise and a stoic sense of purpose.

He led, in other words.

Today, Hugo – the last major hurricane to make direct landfall in the Palmetto State (knock on wood) – finds itself back in the news.

Why?  It’s not because of Hurricane Sandy, believe it or not.  It’s because current S.C. Gov. Nikki Haley compared the storm to the recent security breach that took place under her watch at the S.C. Department of Revenue (SCDOR).  For those of you unfamiliar with this story, Haley’s cabinet coughed up 3.8 million Social Security numbers, nearly 400,000 credit and debit card numbers and tax info for as many as 650,000 businesses earlier this year – an unprecedented state-level cyber security breach that the governor has yet to accept responsibility for.

The cost to taxpayers?  Lowball estimates are starting at $340 million.

Of course in addition to permitting the breach and completely failing to detect it (the federal government notified South Carolina that it had been hacked 44 days after the fact – 16 days before Haley alerted the public) – Haley has been busted telling all sorts of lies in its aftermath.

There wasn’t anything where anyone in state government could have done anything to avoid it.

Yeah … and then came the comparison.

“If you think back to Hugo, it wasn’t until Hugo that we brought in an EMD and emergency situations on how to deal with it,” Haley said at a press conference earlier this week.  “This is my way of dealing with my Hugo. Once it happens, it’s an eye-opener that this could happen, but our job is ‘what are you going to do to make sure that my successor is – has more involved than I did.”

“You know I came in and you assume everything is okay and then when something goes wrong that’s when you notice it,” Haley continued.

Wow.  For the moment let’s forget Haley’s grammatical bumbling … or her totally inexcusable “hands off” approach to the security of sensitive taxpayer data … but did we hear her correctly?  Did this idiot really just compare her incomprehensibly stupid and patently dishonest handling of a completely preventable clusterfuck to Hurricane Hugo?

And beyond that … is Haley sufficiently delusional so as to think there’s really some connection that can be made between her botched handling of this self-inflicted disaster and Campbell’s steady leadership in the wake of that much larger, much more serious crisis?

Apparently so … which can only mean that Haley is even crazier than we thought she was.

Hurricane Hugo was a larger-than-life natural disaster that no one could have prevented – but the crisis surrounding it was expertly and courageously managed by the late Gov. Campbell and his administration.  On the other hand the SCDOR breach was a totally preventable bureaucrat-made disaster – one that can be directly attributed to Haley’s asinine “assume everything is okay” policy.  Oh, and the crisis that this incompetence has produced has been colossally mismanaged by Haley and her cabinet officials – all of whom were rewarded a few days ago with seven percent pay raises.

Somewhere, the ghost of Carroll Campbell is stirring.  And our bet is he’s pissed off something fierce.

After all remember that in addition to his leadership during the Hugo crisis, Campbell spent his political career pushing for the consolidation of executive authority in South Carolina – the same authority that Haley is currently refusing to accept.

Sadly … that’s likely to be the real legacy of this latest (and possibly greatest) Haley scandal: The death knell it sounds for any further restructuring of our splintered and unaccountable state government.