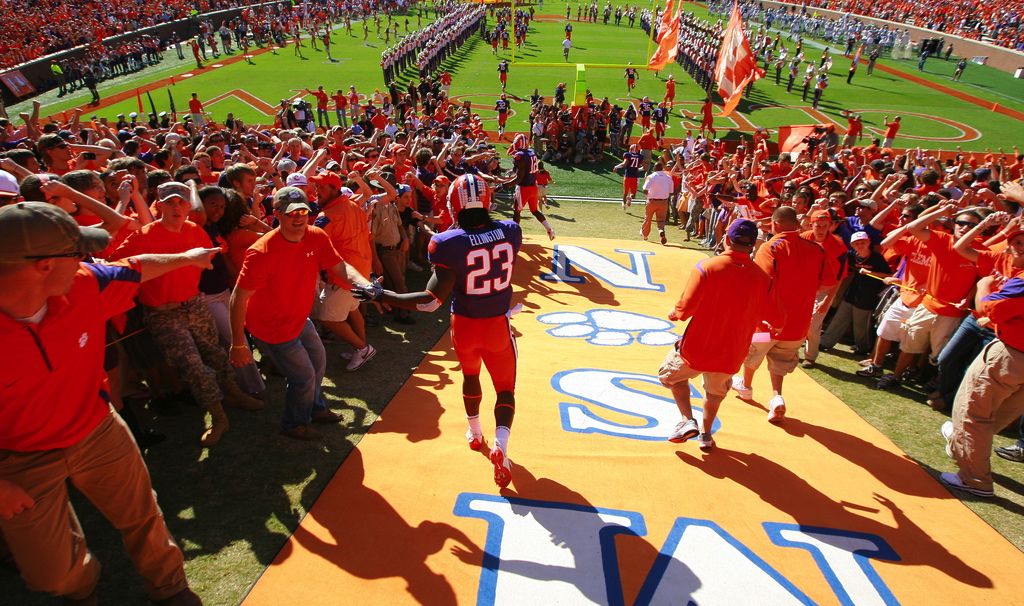 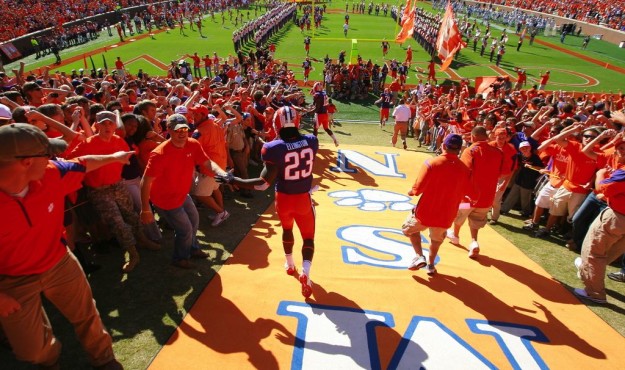 “This is a guy that to me represents all the good things that college football should be about,” Swinney said, adding that Lattimore was “a winner in every regard.”

Good for Swinney … it’s just a shame that more of the Tiger faithful don’t feel the same way.

In a recent thread posted on the website Tigernet.com, Clemson fans engaged in a debate over how to “properly honor Marcus Latimore” (yup, they misspelled his last name).

“I say the Tigers score 21 points in every quarter of our game on November 24 2012,” one fan recommends. “In a humble way, it would show our full respect.”

That’s actually pretty funny … in fact it’s damn near hilarious given that Clemson hasn’t scored 21 points in a whole game against South Carolina since 2008.  But still … comments like that are good clean fun.  And perfectly acceptable smack talk.

The next suggestions weren’t quite so humorous, though, as one Tiger fan said that Clemson fans should “push (Lattimore’s) wheelchair down the hill.”

“I hope whoever is pushin forgets to hold on … oops!” the next commenter adds.

“Ouch hahah that’s not funny,” another writes, quickly adding that they “just laughed out loud.”

Here’s a screen grab of the exchange … 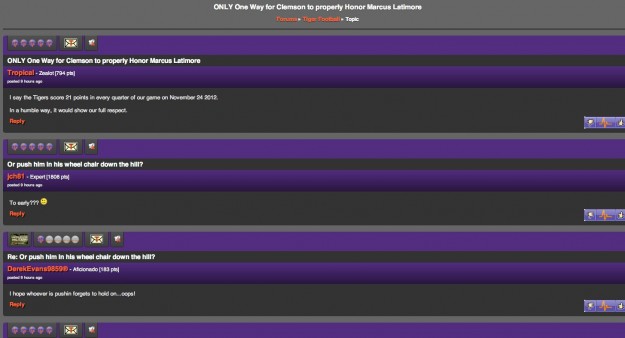 Lattimore – USC’s career scoring leader – suffered a dislocated right knee and multiple torn ligaments during South Carolina’s win over Tennessee on October 27.  The gruesome injury reminded many of the career-ending broken leg sustained by former Washington Redskins’ quarterback Joe Theismann in 1985 – and there was some initial concern that Lattimore may have suffered career-ending arterial damage to his leg.

Fortunately, Lattimore was able to undergo surgery on his knee and doctors are optimistic that he can return to the football field in 2014.  That’s great news for a great football player – but an even better human being.

Obviously we don’t think these fans speak for all Clemson supporters (in fact our guess is that they represent an especially uncouth minority), however there’s no denying that remarks like these are great bulletin board material for Gamecock headhunters like Jadeveon Clowney, Devin Taylor and D.J. Swearinger.

UPDATE: Apparently we’ve been accused on (by?) Tigernet of manufacturing this story.  Here is a statement from our founding editor Will Folks in response to that allegation: “Our website was provided with a link to the Tigernet website – which we then accessed and quoted from faithfully in efforting a report.  We have never been members of Tigernet nor have we ever posted content there.  To suggest that we fabricated this story is demonstrably false.”

SEC: Outside Looking In?