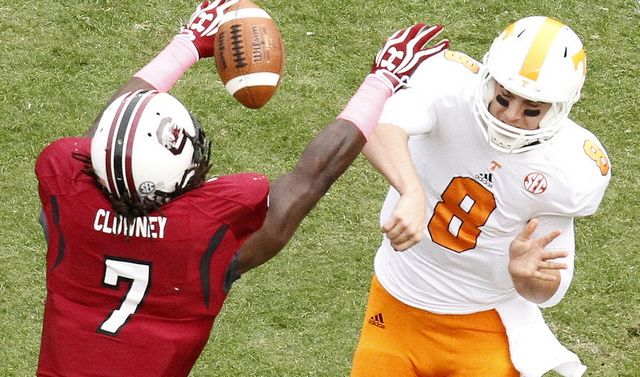 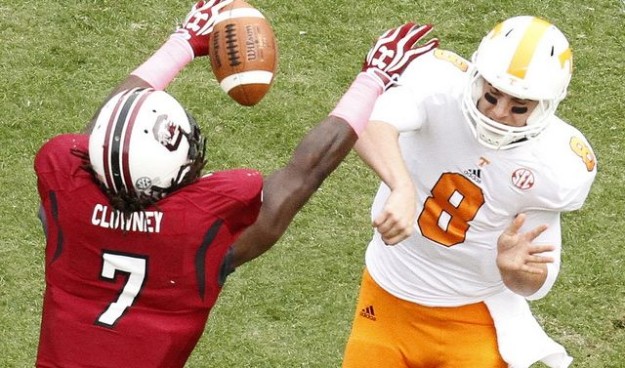 The University of South Carolina football team forced a pair of fourth quarter turnovers to hang onto a 38-35 victory over the Tennessee Volunteers, although the outcome of the game took a back seat in the minds of many Gamecock fans given the devastating – and potentially career-ending – knee injury sustained by star running back Marcus Lattimore.

The school’s career scoring leader suffered a positively gruesome injury to his right knee midway through the second quarter of the game – which was televised nationally by ESPN.  Initial unconfirmed reports from sources close to the program indicate that Lattimore suffered a dislocated knee with possible arterial damage.

Obviously that’s a frightening diagnosis given the seriousness of any injury involving the circulatory system.  In fact a year ago high school standout quarterback Jacob Rainey had to have his right leg amputated below the knee after suffering a similar injury.

Officially, USC is referring to Lattimore’s situation only as a “right leg injury.” 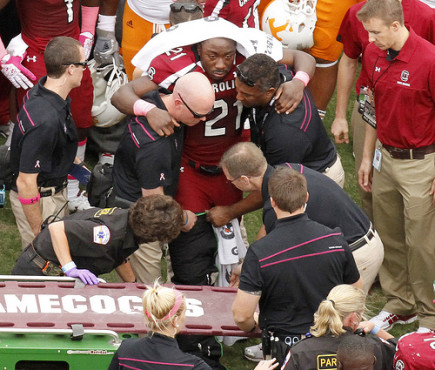 Marcus Lattimore is helped onto a cart following his injury.

As Lattimore was helped onto a cart, all of his teammates – as well as numerous players from the Tennessee bench – poured onto the field to offer him their support.

Meanwhile 80,000 fans chanted his name as he was carted off of the field – clutching a towel to his face.

Moments later Lattimore was transported to a local hospital to undergo further study and treatment.

However Spurrier quickly acknowledged “I don’t know (in) what field of life.”

Gamecock players said Lattimore exhorted them to “act like every play is your last play” as he left the field.

Lattimore – who extended his school record by scoring his 41st career touchdown just moments before his injury – was having a big game for No. 13 South Carolina (7-2, 5-2 SEC) when he went down.  The preseason All-American – who missed the final six games of last season with an injury to his left knee – had amassed 65 yards on eleven carries in leading USC to a 21-7 lead.

After Lattimore went down South Carolina not only let Tennessee back into the game – they nearly gave it away.

In fact it took a pair of big defensive plays – including a forced fumble by superstar linebacker Jadeveon Clowney in the waning moments of the fourth quarter – to keep the Volunteers (3-5, 0-5 SEC) from completing their comeback.

Junior quarterback Connor Shaw – who suffered through two terrible starts against LSU and Florida – got it back on track against the porous Volunteer passing defense, completing 22 of 32 passes for a career-high 356 yards.  Shaw’s big day included three scoring strikes and one interception.  He also ran for 33 yards and another touchdown as he moved to 14-3 as USC’s starting quarterback. 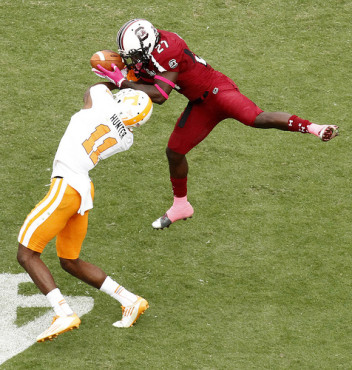 South Carolina’s offense – held to just nine points and 191 yards a week ago against No. 2 Florida – exploded for 38 points and 510 yards against one of the SEC’s worst defenses.

The only problem?  Tennessee’s offense nearly matched them score-for-score and yard-for-yard.  Quarterback Tyler Bray bounced back from a pair of sub-par performances against Mississippi State and Alabama by shredding the Gamecocks’ defense for 368 passing yards and four touchdowns.  In fact the Volunteer offense was on the verge of dealing the Gamecocks’ their third consecutive defeat of the season – but two Tennessee drives in the last two minutes of the game were thwarted by turnovers.

After leading the Vols’ 61 yards in eight plays, Bray fumbled after being hit from behind by Clowney – who had been held in check for most of the game.  However USC failed to pick up a first down and had to punt on the ensuing drive – giving the Volunteers the football back with just under a minute remaining.

Two plays later, though, Bray was intercepted by Gamecock defensive back Vic Hampton – who made a leaping grab on a pass that was nearly hauled in by Tennessee wide receiver Justin Hunter.

Although it came up with big takeaways late in the game to seal the win, South Carolina’s defense looked overwhelmed at times in dealing with Tennessee’s passing attack.  In fact the Volunteers’ 472 total yards were the most surrendered by South Carolina all year.

The Gamecocks have a week off before hosting the Razorbacks (3-5, 2-3 SEC) at Williams Brice Stadium on Nov. 10. Without Lattimore a year ago they managed to go 5-1 down the stretch – including wins over No. 17 Clemson and No. 20 Nebraska.