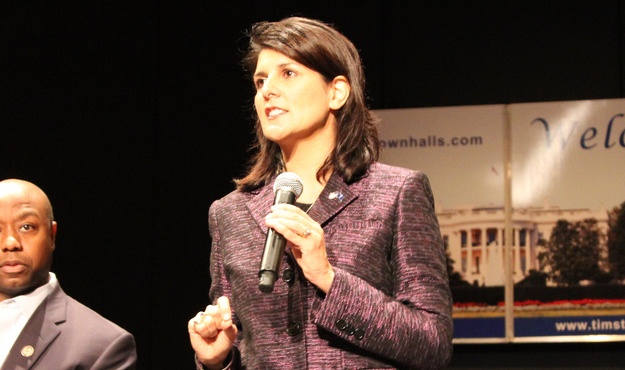 GOVERNOR BAGS ROMNEY EVENT, BUT STILL SCHEDULED TO SPEAK ON “LIMITED GOVERNMENT” IN PHOENIX THIS MONTH

S.C. Gov. Nikki Haley – who has been criticized in the past for her extensive out-of-state political and self-promotional travel – is canceling planned appearances on behalf of Republican presidential nominee Mitt Romney this weekend in the battleground state of Ohio.

That’s easy … she’s got a full-scale disaster on her hands in South Carolina.

Still on Haley’s schedule?  An appearance at the 2012 Goldwater Dinner in Phoenix, Arizona on November 13 alongside Oklahoma Gov. Mary Fallin.

“We are thrilled to welcome two governors who are taking on entrenched political interests as they return their states to the principles of limited government,” the Goldwater Institute noted in previewing Haley and Fallin’s appearance.

Hmmmmm … last time we checked that statement was categorically false.

UPDATE: Ironically, while Haley will be in Arizona touting her vision of “limited government,” S.C. Treasurer Curtis Loftis will be hosting a forum on “fraud detection and prevention in government.” Frankly, we would advise Haley to attend that event rather than spewing a bunch of patently untrue talking points at a dinner more than halfway across the country.

Haley is a fraud.
Her only hope is a reality TV show.
And that reality is a hoot.

Even her reality tv show would suck….just like her

Let her go out of state, we don’t need her in SC. She’s sorry as hell…..run, run, run to anywhere, but leave us be.

She is fighting Socialism every day!

And as all good Republicans know

There is NOTHING more important than

Except for tax cuts for millionaires

Wow, she is desparate for attention, as she knows it is short lived.

BTW, where is the first dude? MIA?

She’ll be doing strip club tours like middle aged Playboy models if this keeps up.

About time for DWTS?

She is a stupid ugly bitch!

Haley not going to Ohio was probably Mitt Romney’s not hers. They probably TOLD her to stay home!! They probably realized how bad it would look.

WHY IS Ignorant FITS IGNORING????

You fucking idiot, T! Posting it on two different stories? Okay, I’ll give a simular reply: Doing “a heck of a job” when compared to Bush and Brownie.

haley’s in until 2014, unless she leaves for the Romney Administration…

Obama is Up in 4 days…and this Stupid Some Beech, FITS… is SILENT…

Great Job handling your JOB…Obama…FEMA, too…

BlazinT is copying and pasting his own shit. I’ve noticed four so far. Fear is setting in…?

A Play for Pa.
Exclusive: Romney’s heading to Pennsylvania as GOP drops millions on ads

Sorry (not), Bigot, no cheating in Pa this time. SCOTUS nipped the GOP voter suppression attempt in the bud.

Hard work and tenacity pays off time and time again. Treasurer Loftis deserves thanks for doing the hard work of making government efficient and transparent. The rest of our politicians seems not to care.

Don’t think Nikki wants (dares) to run again. She has flopped in every aspect of governing, management and leadership.

Her personal motto is – “Haley for Haley and only for Haley”. She will have to change it when she gets rid of Mikey (and he won’t see it coming).

She is sweating more than a cottonpicker’s hatband that whe will be abandoned and left on the side of some dirt road. She only wants to get the HELL OUT OF SC……alive.

She can go to Alaska. They don’t like Sista Sary anymore.

Limited government in Nimrata speak = do nothing, know nothing.

Still, I’m glad she’s going to Phoenix. Every day she is away from S.C., it’s a GREAT DAY IN SOUTH CAROLINA!

Please tell me this event is not affiliated with Barry Goldwater, a true Conservative. If so, watch out for some grave spinning.