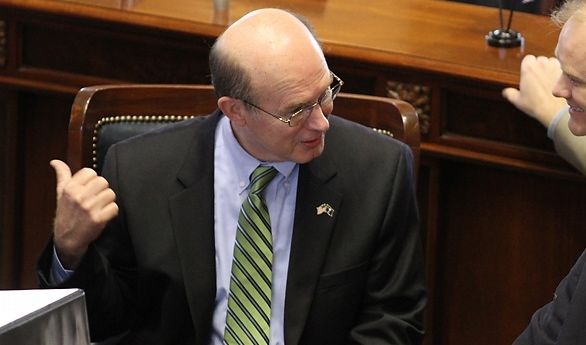 S.C. Sen. Larry Martin (RINO-Pickens) is slamming – but not refuting – the content of a political advertisement run by Liber-TEA, an entity created by this website’s founding editor.

“Why is conservative Larry Martin is being attacked by shady out of state special interests?” the ad asks.

We’ll grant Martin the point that Will Folks (a.k.a. Sic Willie) is all sorts of “shady,” but Liber-TEA is a registered South Carolina corporation and our founding editor was born, raised and has always lived in the Palmetto State.  Of course any sentence that begins with the line “conservative Larry Martin …” can be unilaterally dismissed.

Anyway, Martin’s ad is heavy on his alliance with S.C. Gov. Nikki Haley –  touting his prior support for Haley’s transparency legislation and her government restructuring proposals.

He also references the fact that he scored an “A” on Haley’s report cards – such as they were.

Remember, Haley’s agenda included no tax relief, no spending cuts, no taxpayer rebate fund, noparental choice … and no real government restructuring.  She also refused to address pension fund reform – an issue that Martin should be well-aware of given his involvement in a shady retirement scam that’s for state lawmakers only.

Look … we’ll give Martin credit for helping pass Haley’s roll call voting bill (which we supported), but his transparency record is spotty at best.  In fact a few years ago he was singlehandedly responsible for killing legislation that would have created an online checkbook (which would have enabled Palmetto State taxpayers to follow every itemized government expense).

Ironically Martin – who has supported record-breaking budgets (while rejecting taxpayer rebates) – objected to the online checkbook because it was “too expensive.”

“We’re not going to grow government like that,” he said at the time.

A former Democrat, Martin is one of the most fiscally liberal lawmakers at the S.C. State House.  And while Haley may have given him a hall pass,  Martin has fared abysmally on numerous other report cards – including one released last week by the Palmetto Liberty PAC.  Martin also received an “F” on an Upstate Tea Party scorecard.