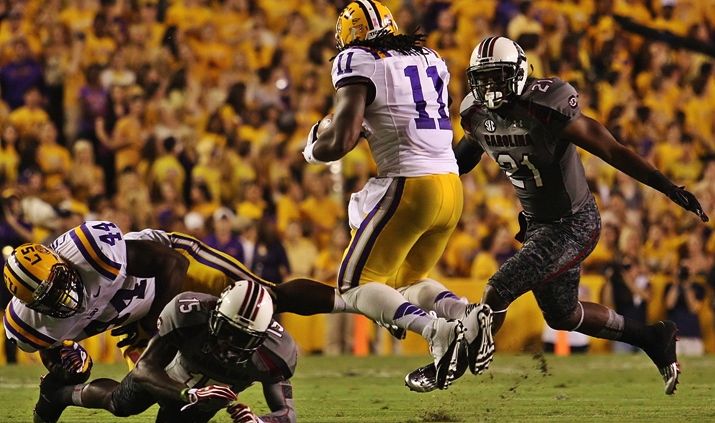 NO. 3 SOUTH CAROLINA GOES DOWN IN DEATH VALLEY

When the 2012 University of South Carolina football schedule was released last December, most Gamecock fans circled this week’s matchup against defending SEC champion Louisiana State University as USC’s most likely loss of the season.

Of course when LSU lost All-American defensive back Tyrann Mathieu prior to the start of the season – and came out flat in their first two conference games of the year – Gamecock fans started to feel a big more confident about their chances.  And it wasn’t just a sneaking suspicion that LSU might not be quite as good as their preseason No. 1 ranking, either – it was the emergence of a much more talented, more consistent USC team.

Led by a punishing defense, Steve Spurrier’s Gamecocks had raced out to a 6-0 start – punctuated by a 35-7 evisceration of fifth-ranked Georgia last week.  The only problem for Spurrier?  The team that spanked the Bulldogs in the cozy confines of Williams Brice Stadium a week ago was nowhere to be found in Baton Rouge.  And so No. 9 LSU (6-1, 2-1 SEC)  used a breakthrough performance from freshman running back Jeremy Hill and a suffocating defensive effort to earn a 23-21 upset over No. 3 South Carolina (6-1, 4-1 SEC).

And as the time-honored football cliche goes, “the game was nowhere near as close as the score would indicate.” LSU amassed 406 yards of total offense compared to South Carolina’s 211 – but even those numbers don’t tell the tale.

Spurrier’s offense was positively anemic against the Tigers – while defensive coordinator Lorenzo Ward’s vaunted unit hung tough, until finally breaking down in the fourth quarter after having been repeatedly sent back out onto the field as a result of offensive woes.

LSU ended the game with a whopping fourteen-minute time of possession advantage – a number which more capably demonstrates the degree to which they controlled this contest.

“That was Death Valley,” LSU head coach Les Miles declared after the game. “That was the place where opponents’ dreams come to die.”

Miles’ postgame comment was in reference to a quip offered by Spurrier earlier in the week – in which he pretended to be confused about whether LSU or Clemson had the real “Death Valley.”

A near-record crowd of 92,794 certainly shared their views on that subject with the Ol’ Ball Coach – who slipped to 0-3 against the Tigers during his tenure at USC.

“I realized why LSU was preseason No. 1. They can run the ball and stop the run,” Spurrier said. “That was the biggest difference in the game, probably.”

He’s right … LSU consistently shut down USC’s ground game and got steady pressure on quarterback Connor Shaw.  Meanwhile the Gamecocks were gashed for 258 rushing yards – dozens of which came after contact thanks to sloppy tackling and LSU’s running backs driving the pile.

Despite being man-handled for most of the game, South Carolina still entered the fourth quarter with a 14-10 lead.  However three disastrous drives late in the game (which resulted in a net loss of eight yards) set up three LSU scoring drives – including a 50-yard touchdown run from Hill that gave Miles’ team a 23-14 lead.

The Gamecocks scored a late touchdown to cut the lead to 23-21 – and were able to get the ball back from LSU with 40 seconds left – but a lack of timeouts and poor clock management doomed them (not unlike in the waning moments of last year’s loss to Auburn).

With this loss, South Carolina’s school record 10-game winning streak – which was also the longest current streak in the nation – is over.  Meanwhile Shaw – who suffered through one of the worst performances of his career – found himself on the wrong end of the scoreboard for only the second time in fifteen games as USC’s starter.  Shaw finished the game 19 of 34 for 177 yards – throwing two touchdowns and two interceptions.

Marcus Lattimore – who entered the 2012 season as a leading Heisman Trophy candidate – was completely shut down by the LSU defense, gaining a season-low 35 yards on 13 carries.  Lattimore did score his 37th career touchdown, though, extending his school record.

Where does USC go from here?  Well, a win next week against Florida and the Gamecocks will take a major step toward their second SEC East title in three years.  Of course to do that they’ll have to remember where the keys to the offense are …

Tough loss for sure.

Damn! We really could have won this one, too. We have to do better next game. Go Cocks!

Shake it off…and move on…

Death Valley will-has beaten a lot of teams. SC wins that game anywhere else, but it was almost un-winnable because Miles is almost un-beatable there at night…

PS: For FITS to say it was not as close as the score shows what a COMPLETE, un-talented know-nothing he is…(hire a sport-writer, Dumb@$$)

It was closer than the score. Stats mean nothing. That INT more or less gave the game to LSU. SC lead most of the way. It was a VERY close game and SC almost found a way to win…

LSU knows they dodged a bullet.

A rare moment of lucidity from BigTwat.

Well put. If they met again at a neutral site LSU would need a perfect game to win.

I want to be like Big T when I grow up because he knows everything–he thinks he’s God! Oops, maybe Satan instead!

Who dat?
Who dat talkin’ all dat sense?
Who dat?
You sho you BigT?
Cain’t argue with nuttin you said…..

Tough loss, tight game
BADLY COACHED for two reasons :
Lattimore did not get enough carries even though he did dome great blocking second half.

A coach can not loose his composure on the sidelines as Spurrier does. This will confuse, partially enrage and most importantly you loose valuable time to adjust and do something productively.

The first issue can be addressed , the second not.
go Cocks, next week is THE big one…

Agreed Bike Dude.
Unorganized -this lack of discipline rest square on the shoulders of the coaching staff and the OBC.
The ” monkeying around”, threatening to take the visor and head phones off DOES NOTHING, zilch, nada to rectify a wrong assigment or communicate better…it communicates frustration and fear, something you can have before arter but not during a mission…

Haha I told you all alone that the coots was soft a butter. This was only a preview of how ugly thingssll be in the real Death Valley. that coot defense is lousy and will fold bad under horses like Ellinton, Watkins and, Hopkins. Hahaha at the crying coots taking this a a morale victory. Dabos got something for you Stevey boy. Haha!

you be da geke u geek.

34 yards rushing against LSU’s second string defense. Don’t you know that Florida is reviewing these tapes right now and planning a defense strategy identical to the one LSU used. Our outstanding defense had one sack against an offensive line made up of freshman.

The coots are going to lose to Florida and Arkansas too.

Ain’t no shame in losing to LSU in (the other) Death Valley. Here’s a little Hank for your Sunday Mornin’ Coming Down. Gotta go, I smell someone fryin’ chicken!

Goodbye Joe, me gotta go, me oh my oh
Me gotta go pole the pirogue down the bayou
My Yvonne, the sweetest one, me oh my oh
Son of a gun, we’ll have good fun on the bayou

Thibodeaux, Fontainbleau, the place is buzzin’
Kinfolk come to see Yvonne by the dozen
Dress in style, go hog wild, me oh my oh
Son of a gun, we’ll have big fun on the bayou.

Disappointing effort. I did not see the fire I expected. Shaw looked confused at times. And defense got pushed around.

Still can be a great season. Still can win the SEC and maybe be in line for more. But cannot hit the field with that effort again.

It was like watching Planet of the Apes Part IV. LSU’s players were bigger, faster, meaner, and, yes, blacker. Until we start recruiting from the state prisons, we aren’t going to beat the likes of LSU or Alabama.

Plus, the Old Head Ball Coach needs to put his visor over his mouth – he telegraphed several calls – when Brent Mussberger knows what you are going to do, you have to figure LSU does too – they can read lips and see hand signals. Come on, Mr. Offensive Genuis. This ain’t Clemson.

I’m totally bummed out about losing, but that same half assed performance will still beat half of our remaining teams. The stats were atrocious but if you take away Shaw’s first pick late in the game I think we win. It’s pretty funny to think about that when they basically manhandled us the whole game. Miles and Co. found our run defense weakness, not that it wasn’t happening all season, he was just the only one so far with the players to exploit it. Establish the pass, create a big hole in the line, watch our linebackers have to scramble back home to make the tackle…..8-15 yards down the field. Over and over to be exact. You can’t take anything away from that frosh Hill though, he was an absolute beast! Did anyone else watch Mettenberg tap his hip before every single fullback carry just to watch out defense bite on the halfback every time? I think I actually pulled some hair out while yelling at the tv when they pulled that same play 5 or 6 times in the 4th to get big yards. Oh well, water under the bridge.

Here’s hoping Shaw and team can shake it off and get ready to handle business in the swamp. I hate Florida, I don’t think I can handle a loss down there.

Prepare for the usual October slump. The chicken curse lives!!!

Prepare for the fourth straight loss to the Gamecocks in late November.

Clemson took ownership of the curse when it blew its chance to win the CWS in 2010 and gave the title to the Cocks.

A Humble Chef, so you believe we win with 34 yards total rushing? Take out the interception return and the long punt return and USC didn’t have decent field position the whole game.

LSU got owned by the Gators the other week. You still writing them off for dead?

We had piss poor rushing yards, got pushed around all game, and still got 3 touchdowns and only lost the game by 2 points. How is it so ridiculous to think we could’ve won?!?! Keep drinking the Haterade bro…

We weren’t prepared and had an off game. If you want to hate on a team that’s truly overrated, let me present you with WVU…

Carolina matches up pretty well vs. Florida. Their defense is not as stout as LSU’s, and Spurrier is no stranger to the Swamp – duh…

We need to bag those stupid unis. No one is going to pay money for some o-lineman’s sweaty size 50 gray cammo pants with a white “spur” on the hammy.

PS – our cheerleaders have bigger tits than LSUs. Dont know about Florida.

PPS – I like Shaw but he still has a bad penis head. Sorry.

Well played Dr. Obvious! Correct across the board! Got a good laugh at the PPS….