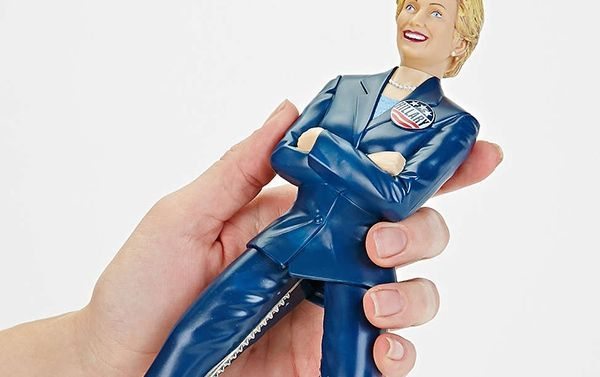 JUST IN TIME FOR THE HOLIDAYS …

By FITSNEWS  ||  Nothing says Christmas like a nice nutcracker … and if you’re in the market for one, the folks at Urban Outfitters have got you covered.  Well, assuming you’re prepared to be called “horribly sexist” at holiday parties by the politically correct police.

We’re referring, of course, to the official Hillary Clinton edition nutcracker, which has been offered by the company for the past seven years.

Why is it suddenly so controversial?  Well, Clinton is the presumed Democratic presidential nominee heading into the 2016 election cycle … and some people are, as we’ve noted on numerous previous occasions, desperate to be offended.  Of course one writer views the Hillary nut-buster as a sexist “fail.”

“Calling powerful women nutcrackers reveals men’s fear of powerful women and this degrading school of thought is SO old-school!” writes Brooklyn’s Laia Garcia for Yahoo. “In the current cultural climate where ‘feminism’ is the word buzzing on everyone’s lips and faux-misandry is the new irony, this nutcracker fails to become the mocking, demeaning thing that its creators probably intended it to be and instead is a sign of triumph.”

Somebody has put a lot of thought into this …

The only thought we’re willing to put into this nutcracker is that of the market-based variety – as in whether we deem it worthy of purchasing as a gag gift.  We decided it wasn’t, but if you disagree – your right (for now) in the marketplace – you can buy one on Amazon here.

Just remember that companies don’t create jobs … or something.

(Although Hillary is all of a sudden on board with the new Washington definition of “economic development“).