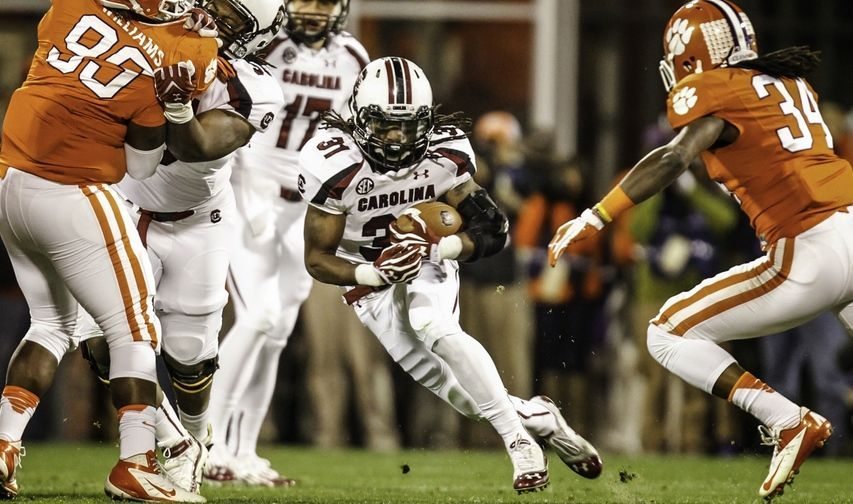 To be clear: Miles was shot (and hospitalized), but the soft tissue wound in his forearm was not sustained during a robbery – as numerous media outlets reported.

So what the hell really happened?

Lott had very little else to say about the case – except that he was pissed off.

“I will tell you this I am not real happy with the resources and the time we spent on this case chasing false leads,” Lott said. “It wasted a lot of manpower.”

Yesterday, FITS quoted a source familiar with the incident as saying “drugs were involved.”

That report has now been seconded by SportsTalk SC – the outlet which first broke the story of the Miles’ shooting.

“I can tell you 100 percent drugs were involved,” a source told the outlet.

SportsTalk SC added in its report that Miles “changed his story at least three times” after Richland County deputies arrived on the scene.

A 23-year-old Lawrenceville, Georgia native, Miles rushed for 1,341 yards and four touchdowns during his career at South Carolina. He also had 416 receiving yards and caught one touchdown pass.

Miles’ biggest game for South Carolina came in 2009 when he ran for 114 yards on just 17 carries against Clemson – leading the Gamecocks to a 34-17 win (the first of four consecutive victories in this rivalry series for head coach Steve Spurrier’s team).

He also scored a pair of touchdowns against Nebraska in the 2012 Capital One Bowl.

Spurrier has described Miles as a “model student athlete.”

After graduating with a degree in criminal justice, Miles took a job in the S.C. Attorney General’s office. His coworkers there describe him as a hard worker and a “good guy.”

S.C. Attorney General Alan Wilson did not immediately have a statement on the latest revelations related to the Miles’ saga.