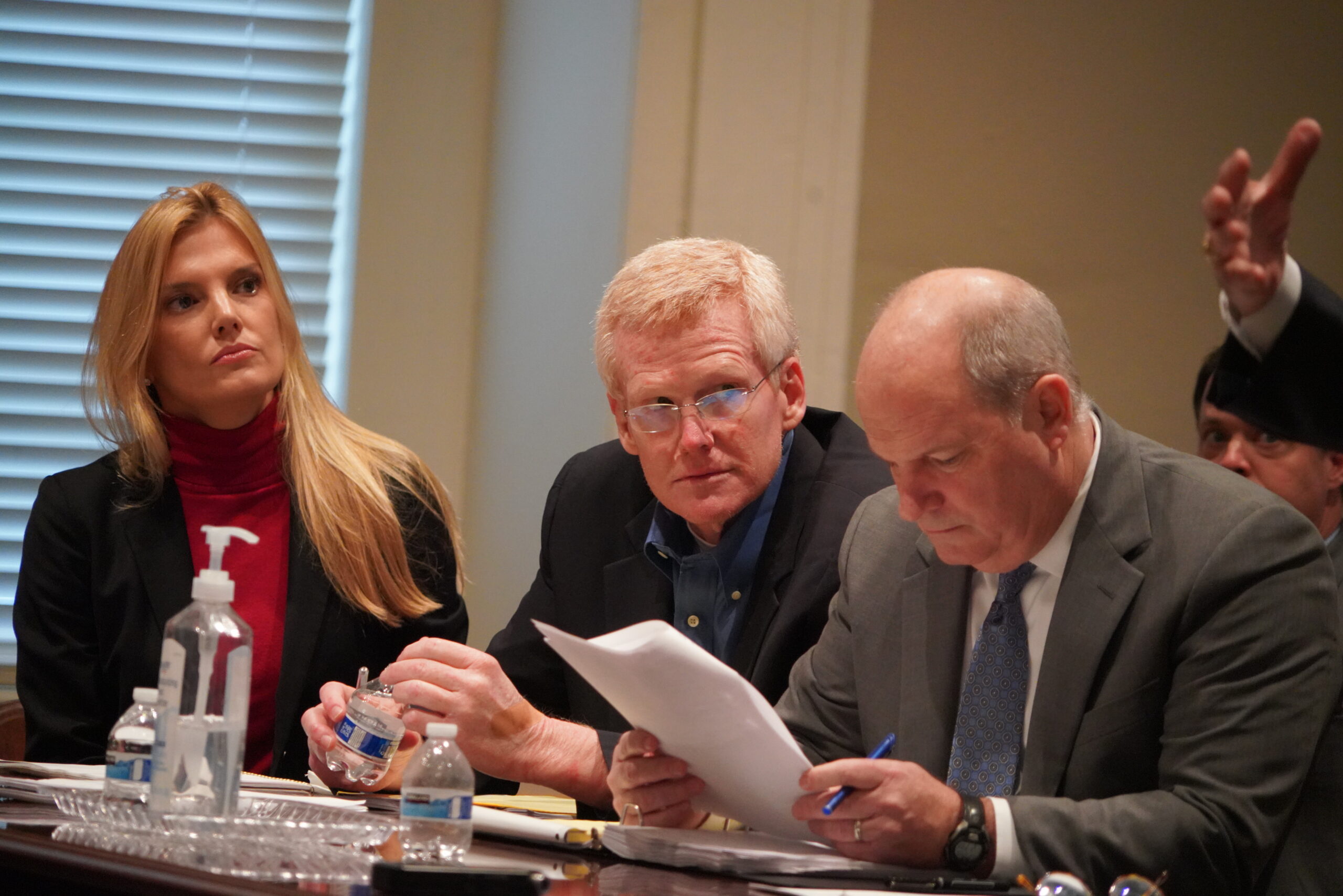 Days before the double homicide trial of accused killer Alex Murdaugh is set to begin in Walterboro, South Carolina, defense attorneys for the disbarred lawyer have filed a motion asking the presiding judge in the case to exclude testimony related to a key piece of evidence against their client.

Actually, the motion goes further than that – asking Newman to strike any testimony from witnesses relying on Bevel’s “work product” due to the “egregious misconduct” of the state.

The filing also blasted prosecutors and investigators for allegedly waging “a campaign of selective and deceptive leaks to news media to convince the public that Murdaugh is guilty before he is tried.”

The most “extraordinary leak?” The assertion that high velocity impact spatter had been found on a shirt worn by Murdaugh on the night of the murders – as first reported by FITSNews last April.

“The only possibly motive for this leak was to convince the public that Murdaugh was guilty of the murders before trial, even before he was formally charged,” Harpootlian and Griffin wrote. “This leak was an extrajudicial statement made on behalf of the state with the deliberate intention to prejudice the present judicial proceedings.”

“It was also a lie,” they continued.

As the state makes its case against Murdaugh for these murders, Harpootlian and Griffin’s latest motion (.pdf) specifically seeks to prohibit its prosecutors from submitting “any testimony regarding blood spatter from Tom Bevel … or other person whose opinion derives from review of Mr. Bevel’s work product.”

This prohibition is sought as “a sanction” for what Harpootlian and Griffin described as the “deliberate refusal” of Bevel – and prosecutors in the office of S.C. attorney general Alan Wilson – to comply with a court order compelling them to produce documents related to Bevel’s opinions on key evidence in this case.

Our audience is very familiar with Bevel, who became a central figure in this narrative two months ago when Harpootlian and Griffin filed a voluminous, 96-page motion accusing investigators and prosecutors of eliciting “false testimony” against Murdaugh.

According to the latest filing, agents with the S.C. State Law Enforcement Division (SLED) are accused of “badgering” Bevel as part of their “bad-faith conduct” aimed at forcing him to change his opinion on the blood spatter evidence.

Neither SLED nor the attorney general’s office had any immediate comment on the latest motion from Murdaugh’s attorneys.

“As is our policy, we will respond only in court or in court filings,” said Robert Kittle, a spokesman for the attorney general.

The timeline laid out in the motion filed this week is familiar: On February 4, 2022, Bevel produced a draft report which stated that “the stains on the white T-shirt are consistent with transfers and not back spatter from a bullet wound (emphasis original),” according to the original filing.

According to the new filing, Bevel originally conceded that “blood and DNA on the bottom of (Murdaugh)’s shirt are transfers from touching his family’s bodies and wiping his hands and face on his shirt, and not the result of high-velocity spatter.”

Harpootlian and Griffin described Bevel’s initial assessment of the shirt as “yet another dead end in (the state’s) quest to prove an innocent man’s guilt.”

The attorneys further noted in their filing that only three particles of gunshot residue (GSR) were found on Alex Murdaugh following the shooting, which they say is “consistent with transfer from recently holding a firearm and not necessarily indicative of having recently fired a firearm.”

According to the defense attorneys, Bevel changed his story about the spatter after SLED agents allegedly “cajoled” him during a visit to his office in Oklahoma. In fact, Harpootlian and Griffin have long insisted the purpose of this trip was to intimidate the expert into reversing his original assessment of the evidence.

In their latest filing, Harpootlian and Griffin went a step further – accusing SLED and Bevel of deciding “to fabricate evidence” against Murdaugh via creative photoshopping of images of Murdaugh’s shirt.

On Monday, March 14, 2022, Bevel informed SLED his firm was “able to filter the colors of the shirt using Photoshop” and that based on this new information he was able to identify “over one hundred stains consistent with spatter” and that there was no “possible way those stains could have been created other than spatter from shooting Paul with a shotgun.”

“Bottom line I don’t see any other mechanism to get so many misting stains onto his shirt other than the spatter created from the shotgun wounding (of Paul Murdaugh),” Bevel wrote in an email to SLED.

This new conclusion was memorialized in a final report submitted to SLED on March 29, 2022.

In addition to raising fresh questions about the evidence against Murdaugh, the latest defense filing contains an affidavit from Kenneth Kinsey – who was recently retained by SLED as a forensic expert in this case (news of Kinsey’s involvement was first reported by FITSNews last month).

Kinsey’s affidavit (.pdf) detailed the graphic nature of the wounds sustained by Paul Murdaugh from the two shotgun blasts that hit him.

According to Kinsey, Murdaugh’s “brain was severed and exited through the anatomical right side of (his) head” from the second of two shotgun wounds he sustained.

“(Paul)’s brain was completely detached from (his) head,” Kinsey added.

These jarring descriptions are consistent with our prior reporting.

“It is my opinion that the fatal shot to Paul’s shoulder, face and head would likely produce enough back spatter, and would be within range to contaminate the shooter,” Kinsey concluded.

Kinsey’s affidavit also contained the first pictures taken from the crime scene – including an image from inside the feed room at the dog kennels where Paul Murdaugh was shot.

As for Maggie Murdaugh, Kinsey described five wounds including one gunshot “to (the) anatomical left side of (her) torso.” This bullet grazed her abdomen and then continued traveling upward “through the left breast” and “into the lower left jaw, face and ear.” The bullet them “proceeded into the brain with no apparent exit located.”

Four other wounds were described in detail, including one gunshot “to (the) back of (her) scalp/ head.”

The exact sequence of the wounds to Maggie Murdaugh could not be conclusively determined, according to Kinsey, but at least one of the gunshots was fired at her while she was “holding herself up on her knees and … her right hand with her shoulders and head down.”

Kinsey also said the “exact position” of Maggie Murdaugh’s shooter could not be determined.

This shocking double homicide lies at the very heart of the ‘Murdaugh Murders’ crime and corruption saga. This still-unfolding Southern Gothic saga chronicles the fall of the “House of Murdaugh,” a powerful legal dynasty which ran the Palmetto State’s Lowcountry like its own fiefdom for more than a century.

The case has attracted national and international attention. Just this week, it was announced that Netflix was preparing to air a new series related to the family. The Murdaugh empire was also the focus of a sprawling piece in The New Yorker published earlier this week.

Murdaugh’s trial is set to commence in Colleton County this coming Monday (January 23, 2023). He has pleaded not guilty to the murders of his wife and son and asked to be judged “by God and country.”


(Via: Colleton County Clerk of Court)