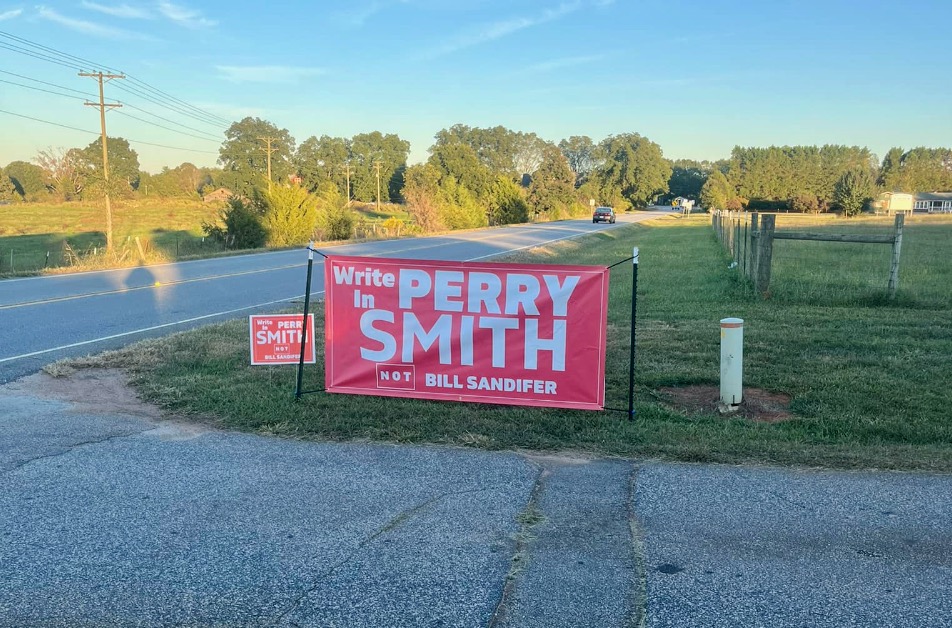 Write-in campaigns in South Carolina tend to be Quixotic exercises. Actually, that’s a charitable assessment. They typically don’t even qualify as exercises in futility – or at least they haven’t since 1954, when the late Strom Thurmond won a U.S. Senate seat in the Palmetto State as a write-in candidate.

As I noted in a recent article, though, there is a renewed focus on write-in voting in 2022 as South Carolinians grow increasingly perturbed by their conventional political choices … or more accurately the lack of political choice.

In the race for S.C. House District 2 in rural Oconee and Pickens counties, a write-in candidate is gaining traction against one of the longest-serving members of the results-challenged, “conservative” S.C. General Assembly.

Powerful S.C. labor, commerce and industry (LCI) committee chairman Bill Sandifer is the GOP nominee for this seat – which he has held since 1995. No Democrat filed to run – nor did any other Republican – meaning Sandifer was unopposed in the primary this spring and is unopposed on next week’s ballot.

Undeterred, Perry Smith – a blue collar worker from Oconee County – is mounting a surprisingly robust write-in campaign against the incumbent.

Branding himself as the “true conservative Republican” in this race, the 52-year-old manufacturing worker has been slamming Sandifer for his special interest servitude – namely the extent to which the incumbent has reflexively done the bidding of Charlotte, North Carolina-based power provider, Duke Energy.

Duke, incidentally, is currently sticking it to Palmetto State ratepayers – something which might have hurt Sandifer had anyone challenged him back in June.

Smith has also pounded Sandifer for his sponsorship of legislation pushed by AT&T that killed a high-speed internet network in Oconee.

“How much did they pay you to allow our citizens to be held behind?” Smith grilled Sandifer on social media recently. “I wonder how many high-paying jobs Oconee County would have today if you did not take it upon yourself to sponsor the bill that killed high-speed internet in our county for the past decade?”

As they say in the rough-and-tumble “First in the South” state … them’s fightin’ words.

Does Smith have a chance? Probably not … but the fact Sandifer and his allies have pivoted to the attack is telling. According to my sources, officials with the S.C. Republican Party (SCGOP) have engaged in some heavy-handed tactics against conservative activists in the area who are supporting the write-in candidate over Sandifer. These tactics have only escalated as Smith’s bid has gained momentum … and the closer we get to next week’s day of decision.


Again, Smith is highly unlikely to defeat Sandifer as a write-in candidate. Far too many South Carolina voters pull the straight ticket lever for that too happen … and write-in candidates almost never have the resources to get their names and platforms out to voters.

It will be interesting to see how close Smith can get, though … and whether his candidacy fuels a credible primary challenge to Sandifer in the 2024 primary cycle. It will also be interesting to see whether the anti-Duke messaging being employed against Sandifer – which is factoring in several North Carolina races – gains momentum.

Sources familiar withe the Duke drama tell me a major, organized push is envisioned on this front in the coming election cycle …

As a reminder, anyone who wants to vote write-in should follow these simple instructions, according to the S.C. Election Commission (SCVotes.gov):

The ‘Murdaugh Masquerade’ Wasn’t About The Murdaughs After All