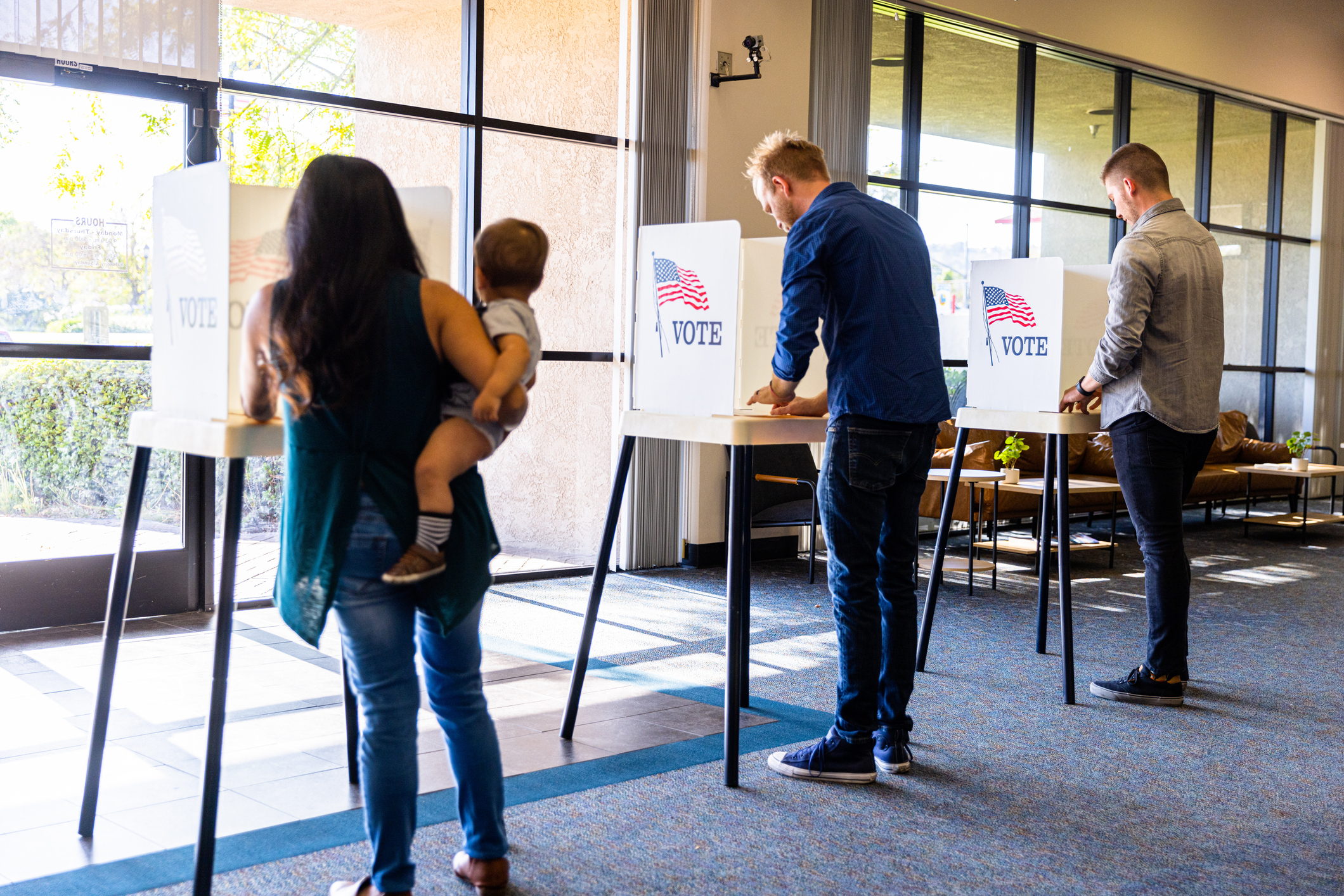 In the first 45 years of my life here on earth, political divides seemed to be based on some semblance of logic … with both sides voting for a combination of ideology and finance. It went something like this:

Republicans voted for the presidential candidate who promised to enforce “law and order,” to keep taxes as low as possible, and to maintain a strong military that would keep America safe from the foreign wolves prowling outside the front door. The protection of rights for Christian worship was also a priority, as the 1960’s was when the Left truly organized, and began to press the secular narrative. Republicans always voted for the smaller-government candidate, as less government goes hand in glove with the idea that “the market” will sort out what regulations were needed — in terms of worker protections, the environment, and providing for the poor.

Democrats voted for the presidential candidate who promised to invest the most money to improve the lives of the poor and compromised, promised to raise taxes on the wealthiest Americans (but not them), and promoted the widest range of “free to be me” ideas. Democrats wanted to remove Christianity from schools, courtrooms, and the public square, as they felt Christianity was being treated as an unofficial “state religion,” which is prohibited by the Constitution. Democrats wanted bigger government, as they felt the big stick of the Federal government was the best way to enforce laws, while holding in check State governments who believed in “states’ rights.”

The DNC was the party of progressive beliefs, protection of the lower and working-class, abortion, and increased governmental spending on social and entitlement programs.

Kinda makes sense, right? Logical stances and sane beliefs on both sides, no? Democrats were largely the party of the group hug, and Republicans skewed towards “survival of the fittest.” Democrats said, “let’s take care of everyone,” and Republicans said, “if everyone would work their asses off, no one would need to be taken care of.”

Both sides had a point.

The Republicans, however, were dead wrong about “the market” protecting the environment, and fortunately the Democrats prevailed. Polluters were operating beyond the pale, and in the name of profits were poisoning America’s land, water, and air. It took a while, but the big business polluters were reigned in, and America became the global leader in environmental protection.

The Democrats were dead wrong that programs and free stuff would lift the poor out of poverty. The reverse happened. What we call “welfare” took the bedrock of black culture — the two-parent family with strict oversight of their kids — and tore it to shreds. We began paying black women to a) have more babies and b) remain unmarried. Affirmative action, however, did help the poor out of poverty — so Democrats assumed their overall plan was the right answer. Sadly, due to the black population growth spurned by welfare, more people are in poverty today than before welfare began… despite the fact tens of millions of blacks have moved into the middle-class and higher.

Republicans were both right and wrong about the need for a massive military. They were right, because the world views America the way 98-pound high school freshman feels about the Homecoming Queen. The freshman aches with his love for her, but she doesn’t even acknowledge his existence … so he hates her for it. And if she won’t love him, well, she’s a stuck-up bitch and deserves to have her car tires slashed. In short, the world outside America’s borders is, in fact, filled with 98-pound freshman looking for a way to harm us.

Republicans were wrong, however, because they did not see the evil of the military-industrial complex, and how our political leaders would deploy the military. In 1935, Marine Corps Major General Smedley Butler (two-time recipient of the Medal of Honor) wrote a book entitled “War is a Racket,” largely based on America’s use of the military for profiteering … which was obviously ignored. President Dwight D Eisenhower warned of the growth on the military industrial complex … he was ignored, too.

In order for Congress to continue receiving campaign contribution (bribes) from defense contractors, they needed wars, which justify never-ending R&D and production. They got The Cold War, Viet Nam, Iraq (1, 2, and 3), Afghanistan, a variety of Black Ops, and now Ukraine. It wasn’t until about five years into the war in Afghanistan that conservatives recognized the decades of spending and body bags, and said, “We trusted the government, because they made these wars seem like we were helping persecuted people, and prohibit the expansion of communism. We have been, in fact, just been killing people to enrich the few, and get liars re-elected.”

Democrats were wrong about big government, as that very concept is why we’re currently $30 trillion dollars in debt … a number that will cause the collapse of the American experiment within two generations. It doesn’t matter “which side” spent it … it’s been spent in the name of power. Our tax money has been spent by a grossly oversized, unchecked Federal behemoth that grows every year.

Every Congressman and Senator knows now the spending is never going to end, so left-and-right they grab as much cash as they can syphon it to their voters. Tens of trillions of dollars in fake federal money makes for more jobs and infrastructure, which makes voters happy, which leads to re-election. The folly of big government is perhaps best represented by the Department of Education … if President Biden dissolved the Department tomorrow, no one would even notice.

In the past fifteen years, idiocy on both sides has led to a massive reshuffling of beliefs and policies. In many cases, the two parties have swapped beliefs entirely. The hippies wouldn’t recognize today’s Democrat party and their embrace of government mandates controlling our personal lives and their support of Big Tech’s censorship. The coat and tie conservatives of Richard Nixon would be shocked to see their party’s focus on the forgotten man in the working class, and their demands we stay out of foreign wars.

But now in 2022, with the mid-terms around the corner, we find ourselves at the oddest of junctures in American history.


As the author of a book on American history, I can say this with confidence: In times of trouble, Americans vote against the party or person that caused that trouble. For the most part they aren’t voting for a savior … they’re voting against the leaders they hold responsible for the mess.

Poor Jimmy Carter found out what happens when you’re sitting atop a financial or energy crises. When the Vietnam War reached the point where the American people were fed up, LBJ didn’t even bother to run. Richard Nixon tried to cover up a minor burglary crime and didn’t finish his term. After liberating Kuwait, George H. W. Bush had the highest approval ratings of any President ever, until Bill Clinton asked the economic question, “Are you better off today than four years ago?”

This voting trend goes all the way back to Thomas Jefferson, who was wildly popular for refusing to pay tribute to the Barbary pirates, opting instead to send the Marines to, well, kill them all. However, Jefferson waited too long to crush the Barbary pirates — and as a result their reign of high seas terror put a hurting on America’s economy … thus many voters chose their pocketbooks over killing bad guys.

Which is why Jefferson barely won his second term in office.

When times are good, Americans vote along “general direction” lines — when times are bad, ideologies take a backseat to the price of coffee and bread. When Americans saw first-hand that Ronald Reagan’s actual policies worked — and lifted us out of the Carter era — he won 49 out of 50 states in second election.

His policies worked. Period. The American people felt prosperous, and safe. They crossed party lines by the tens of millions, and voted for those successful policies.

After four years under President Trump, America was busting at the seams with success — success in every matrix. From black unemployment to the stock market to fixing trade imbalances to slowing illegal immigration to staying out of new wars, every American was in a fair better place. President Obama, after famously saying, “Those jobs are gone forever,” doubled down and said, “(Trump) says he’s going to bring those jobs back. How? What kind of magic wand does he have?”

Must not have been a magic wand. Perhaps Trump said, “Abracadabra.”

But Trump was mean, and bombastic, and unpolished, and narcissistic, and had a really hot wife, so we are told that — through magic, or 99 mules, or suburban housewives with hurt feelings — for the first time in American history, Americans turned their backs on their own safety and well-being, and voted against the interests of their own lives, and the lives of their children. We’re told they voted against the lowest minority unemployment in modern history, against peace, and against better foreign relations in the Middle East.

Abracadabra, Joe Biden emerged from his basement as President.

Two years after Biden’s inauguration, and under the iron fist of Nancy Pelosi and Senate President tie-breaking-voter Kamela Harris, Americans are worse off in virtually every area. The economy is in tatters. Inflation is at 8 percent. Mortgage rates are up 4-percent. The price of energy has skyrocketed. The stock market is in the tank. Employment numbers are awful. Fauci and the CDC are currently confessing to many of the massive mistakes made during Covid.


Biden cannot answer questions that are not approved in advance. Crime in major cities has exploded, as has homelessness, assaults, and drug use. Millions of residents are fleeing their Blue states directly into Red states. The southern border is practically unmanned. Russian is now threatening global nuclear war.

And yet, there’s a very real chance the US Senate may remain split 50/50. The Republicans will take a few seats the House, no doubt, but how can any Democrats be re-elected? What sane person would vote for the person/ party directly and undeniably responsible for their woes? Ideologues, yes. People wealthy enough not to care, sure. But incredibly, there are tens of millions of Americans whose lives are now an economic wreck … who don’t feel safe walking the streets of their city… who can no longer afford to buy even a modest home … who see clearly how devastating all this is for the poor… who will walk into the voting booth and vote for their Democrat representatives, declaring with their vote, “Give me more of the same. Keep on keepin’ on.”

The last time things were this bad, Jimmy Carter was President, and voters turned to a Republican, who in turn fixed the problems. The Democrat party was banished to the minority for years after, but somehow 2022 is different? Why will liberals go into the voting booth and vote against their family’s well-being?

Several things: Social media. Network news lying. Individuals loathing themselves for being white. Continued rage at the Orange Man. And seething hate for those who think differently. Lots and lots of hate.