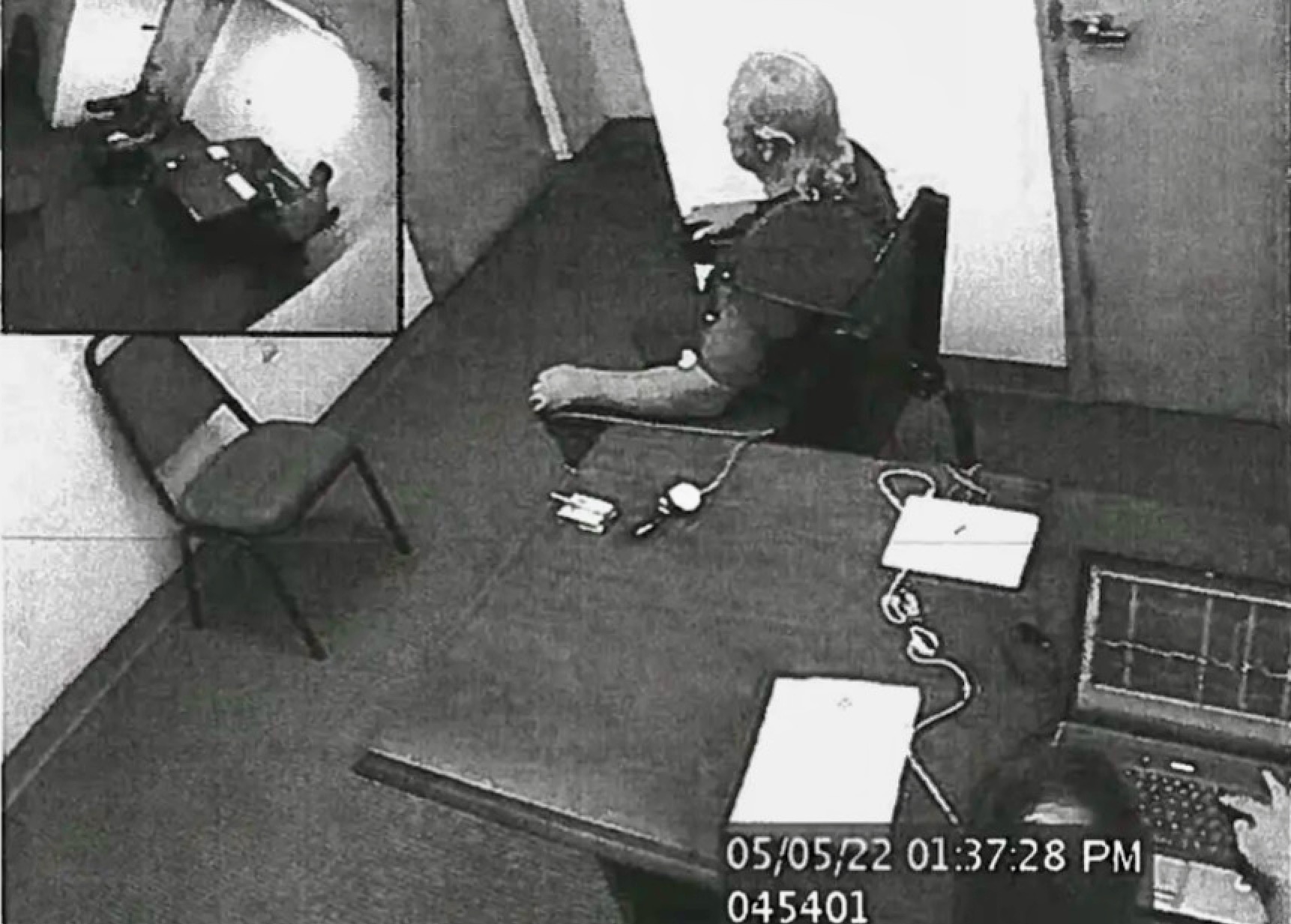 A shocking, reverberating revelation in the ‘Murdaugh Murders’ crime and corruption saga came like a bolt from the blue on Friday afternoon … upending everything everyone thought they knew about this still-unfolding maze of multi-layered, multi-faceted criminality.

The exam in question was administered on May 5, 2022 by captain Bryan Jones of the S.C. State Law Enforcement Division (SLED), the agency investigating the double homicide as well as a host of other crimes allegedly committed by Murdaugh and various co-conspirators.

The exam in question covered whether Smith had anything to do with (or knew anything about) the double homicide at the heart of this Southern gothic drama – which has led to the downfall of one of the Palmetto State’s most prominent legal dynasties.

Of course, the failed polygraph exam was just the beginning of the latest upheaval … which has thrown a major monkey wrench (or rather multiple major monkey wrenches) into the state of South Carolina’s murder cases against Alex Murdaugh.

Until Friday, no one had suggested anyone but Alex Murdaugh was involved in the killings.

During the polygraph examination five months ago, though, deception was indicated in Smith’s responses to the following questions …

“In other words, Smith lied when asked ‘did you shoot’ Maggie or Paul, lied when asked the same question a second time, and lied when asked if he was present when they were shot,” Murdaugh’s attorneys – state senator Dick Harpootlian and Columbia, S.C. attorney Jim Griffin – noted in their motion to compel prosecutors to release additional evidence related to its ongoing investigation of this crime.

Not only that, the motion (.pdf) contained a zoomed-in image from the moment during the interview when Smith’s deception was visible after being asked about murdering Maggie and Paul.

Smith was interviewed by Jones for “54 minutes before the polygraph,” according to the motion.

During that time, he told investigators “I was nowhere near the place where Maggie and Paul got killed at.”

Asked what he knew about the murders, Smith offered up a “detailed story blaming Paul and an unnamed groundskeeper,” according to Harpootlian and Griffin’s filing.

“Maggie had a thing going on with the groundskeeper which I never met him, don’t know his name … and Paul went down into one of the barns and caught him and he got upset and he went and got his rifle and was hollering and screaming his mama his mama was running and she fell down and she got up, he shot her in the ass and the bullet come out the top of her head and then he turned to the groundskeeper guy,” Smith told the investigator. “But the groundskeeper already went to his truck and got a shotgun.”

Smith was asked multiple times prior to the commencement of the polygraph exam whether he shot Maggie and Paul – or whether he was at Moselle at the time the murders were committed. He “repeatedly” answered no and offered the names of three individuals who could place him at his home when the murders were believed to have taken place.

After the polygraph examination had concluded, Smith was informed by Jones that his responses to questions “dealing with the Moselle property incident” indicated deception.


Smith fired back, telling Jones he was “thirty-five miles away” from Moselle at the time of the murders and “ain’t no way in hell anybody can put me there,” according to the filing.

“It does look like you’ve got some direct knowledge or some, some participation,” captain Jones responded, according to the filing. “I think you’re leaving something out.”

At this point, Smith “became agitated,” according to Harpootlian and Griffin’s retelling of the polygraph video.

“I wasn’t there,” Smith said, according to the filing. “There ain’t no way shape or form nobody can put me there I was not there.”

At this point, the filing veered into alleged failures by SLED to follow up on Smith’s alibi – and alleged corruption on the part of prosecutors in the office of S.C. attorney general Alan Wilson.

According to Murdaugh’s attorneys, Smith (above) provided SLED with three witnesses – Donna Eason, Steve Hudson and Kevin Salisbury – who could corroborate his alibi.

“It does not appear SLED ever interviewed Donna Eason following the failed polygraph examination,” the filing noted. “SLED did interview Hudson and Salisbury, neither of whom provided a compelling alibi in part because SLED waited two weeks before interviewing them, giving Smith an opportunity to tell them what to say.”

In fact, the filing from Harpootlian and Griffin claims Smith did speak with both Hudson and Salisbury prior to them being interviewed by SLED on May 17 and May 20, respectively. Also of interest? Salisbury owed Smith an estimated $20,000 on his Walterboro, S.C. residence – which property records indicate has been in Smith’s name since 2015.

According to Harpootlian and Griffin, Smith’s failed polygraph – and SLED’s alleged failure to follow-up promptly and thoroughly on this facet of the homicide investigation – is relevant because “Smith regularly delivered drugs to Moselle near the dog kennels where Maggie and Paul were murdered.”

“In other words, the man who could not honestly say he did not shoot Maggie and Paul often committed other crimes at the location of the murders,” Harpootlian and Griffin wrote.

SLED declined to comment on its various Murdaugh-related inquiries. According to its public information director, Renée Wunderlich, the agency planned on deferring to Wilson’s office – which was preparing a motion in response to the filing from Harpootlian and Griffin which is expected to be submitted sometime on Monday (October 17, 2022).


Speaking of Wilson, his office was accused by Harpootlian and Griffin of improperly suppressing evidence which could be beneficial to Murdaugh’s defense – and of making a “false representation” to the court related to the forensic evidence in this case.

“The crime scene forensic evidence the state collected not only is insufficient to prove Alex shot Maggie, but it also actually proves Alex did not shoot Paul,” Harpootlian and Griffin wrote (emphasis original).

Specifically, Harpootlian and Griffin rebuked previous reports of high-velocity impact spatter being found on Murdaugh’s clothing – chalking that bit of evidence up to “a minuscule amount of Maggie’s blood on a T-Shirt, transferred when (Murdaugh) frantically attended his wife’s bloody corpse.”

To be clear: Harpootlian and Griffin’s description of this particular piece of evidence is totally inconsistent with what this news outlet previously reported. For starters, at no point in time did FITSNews suggest the spatter involved blood.

The attorneys took it a step further, though, claiming SLED failed to conduct any forensic analysis whatsoever on the clothing of the two victims – which would have possibly revealed whether one of them killed the other prior to being murdered themselves.

“There is no indication SLED attempted to obtain DNA from Maggie and Paul’s clothing,” they alleged. “This singular investigative focus on Alex has existed since the moment he called 9-1-1 to report finding Maggie and Paul brutally murdered at Moselle.”

Harpootlian and Griffin also argued that the state was relying on Smith as a witness in exchange for “non-prosecution agreements” which were rendered “null and void” the moment Smith failed his polygraph examination.

“The state is turning a blind eye to the obvious, that the reason Smith failed the polygraph when asked if he murdered Maggie and Paul is because he in fact did commit these heinous crimes,” the attorneys wrote.

Furthermore, Harpootlian and Griffin asserted that prosecutors had entered into a “tacit agreement with Smith that he will not be ‘looked into’ for Maggie and Paul’s murder(s) if Smith assists the state as a prosecuting witness against Alex.”

Finally, Harpootlian and Griffin demanded state investigators “obtain a DNA sample from Smith to compare against DNA obtained at the crime scene, to include from the victims’ clothing” and to allow “the defense DNA expert to conduct such an analysis.”

Smith has been a key player in this still-unfolding narrative from the very beginning. For starters, he has been accused of cashing more than 400 checks totaling at least $2.4 million Murdaugh’s behest. Of interest? Some of these checks were cashed by Eason – one of the three names Smith gave to SLED to corroborate his alibi for the night of the Moselle murders.

Smith is also facing fraud and weapons charges after allegedly shooting Murdaugh in the head during a bizarre staged suicide last Labor Day.

Murdaugh’s attorney’s initially claimed he was shot by a passerby while trying to change one of the ‘run-flat’ tires on the Mercedes-Benz sport utility vehicle he was driving. This narrative began falling apart almost immediately, however – thanks to shifting, conflicting stories provided to members of the mainstream media.

Additionally, there has been no visible evidence of the “superficial” head wound Murdaugh reportedly sustained in the incident.

Whatever happened on that Hampton County roadside last summer, this shooting incident propelled Smith onto the national stage – attention which only escalated after it became clear he was a key cog in the alleged financial crimes Murdaugh stands accused of committing against a host of victims.

In the roadside shooting case, Smith was charged with assisted suicide, assault and battery of a high aggravated nature, pointing and presenting a firearm, conspiracy and presenting a false claim for an insurance payment of more than $10,000.

As I noted last week, Smith has been incarcerated at the Lexington County detention center for the past two months after his bond on multiple charges related to this saga was revoked by S.C. circuit court judge Clifton Newman.

The man known as “Cousin Eddie” has previously called Murdaugh “one of my best friends.”

Prioleau Alexander: The Cashless Society Is Coming For You