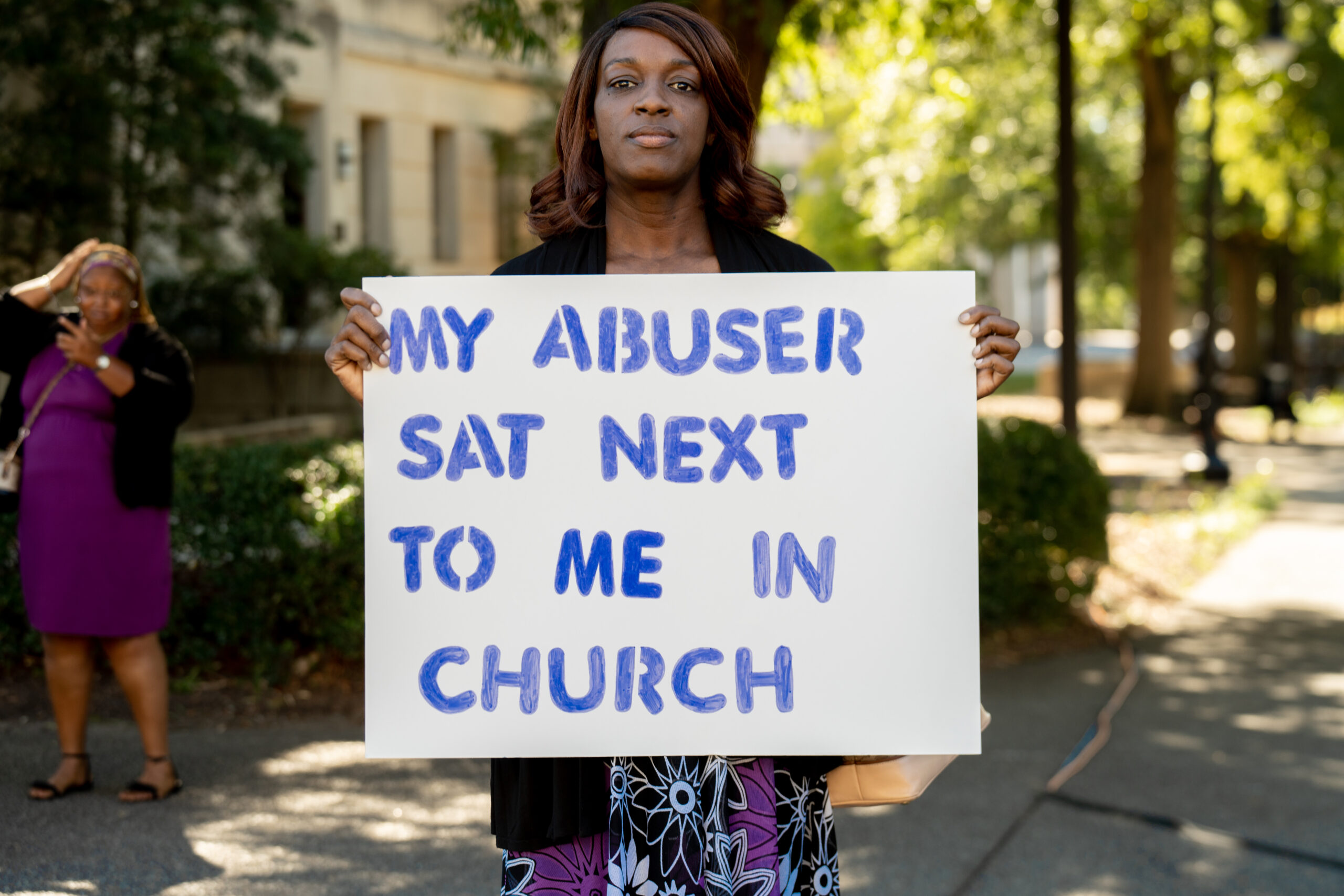 Today marked the 25th South Carolina silent witness ceremony – a solemn event where survivors of domestic violence, victims advocates, law enforcement officers and the families of men and women killed in domestic violence incidents in the prior year come together to remember those lost.

Before the event Vickie Fleming – sister of Rhonda Fleming, who was shot to death by her estranged husband in 2003 – spoke with me about how her life has been permanently altered by domestic violence. As Fleming told me about her sister, and her untimely death, a tear rolled down her face.

Nineteen years have passed but the wounds are clearly still fresh.

Fleming now dedicates her time to helping victims. As she told me about one victim whose case was finally going to trial, Fleming showed me a truly gruesome photograph of the injuries inflicted on this woman – explaining to me how it has taken years to help her transition from victim to survivor.

When it comes to domestic violence statistics, South Carolina is no stranger to underperforming expectations. The Palmetto State typically finds itself in the bottom third of the nation in domestic violence fatality rates.

This morning, those statistics were illustrated far better than they ever could have been through percentages or charts.

It was impossible not to see – and hear – the multiple children in attendance at today’s event. Their uninhibited young voices pierced the solemnity of the proceedings – reminding all in attendance that this scourge is painfully generational in its impacts.

“Wake up. Don’t make a sound. Grab your sister. Come on down,” said speaker Tina Torres as she shared the story of the abuse she witnessed and suffered during her childhood, and talked about how it conditioned her to accept physical abuse in her adult relationships.

After years of accepting this abuse, Torres utilized emergency housing and a variety of other programs to gain independence and break the cycle of violence. Now she helps others make the same transition.


The Palmetto State ranked 23rd in the nation in a measure of the number of women killed by men, marking the second time the state has been out of the ten worst states in the nation in the last two decades.

This is a marked improvement from 2015, when the state ranked dead last – and the years which followed during which time the state hovered in the bottom five.

Advocates I spoke with on condition of anonymity told me the Covid-19 pandemic caused an unprecedented surge in domestic violence nationwide.

Let us hope that South Carolina’s improved standings persists in the coming years, and that our expectations aren’t falsely inflated by data (the statistics discussed today are from 2020) skewed by this anomalous event.

The improvements seen in recent years – including those prior to Covid – can be attributed to the hard work of many of the individuals in attendance today, but their hard work will continue to be stifled so long as the individuals who assemble in the S.C. State House, which loomed in the background of today’s proceedings, continue to exercise undue influence over the state’s judicial branch.

When this news outlet wrote an article exposing this injustice, lawyer-legislators Leon Stavrinakis and Micah Caskey quickly moved to attack FITSNews, with Stavrinakis slamming “bloggers (for) blindly regurgitating the biased talking points they are handed (and) shifting blame onto judges and the legislature.”

Representative Stavrinakis clearly didn’t expect us to look into the cases he argued in front of Judge Price, because it didn’t take long to learn “the state is zero for six on bond revocation motions against Stavrinakis in front of judge Price” according to prosecutorial sources.

We should be able to count on our state’s judicial branch to protect us from domestic abusers – even if they are represented by members of the legislature.

While the human condition condemns us to a never-ending struggle with domestic violence, it is my sincere hope that our institutions and leaders will continue to take meaningful steps to assist those who find themselves trapped in violent homes.

In fact, I would encourage lawmakers to look to those who participated in today’s solemn event – and those whose memories they mourned – for ideas and inspiration on how to break the cycle of violence.