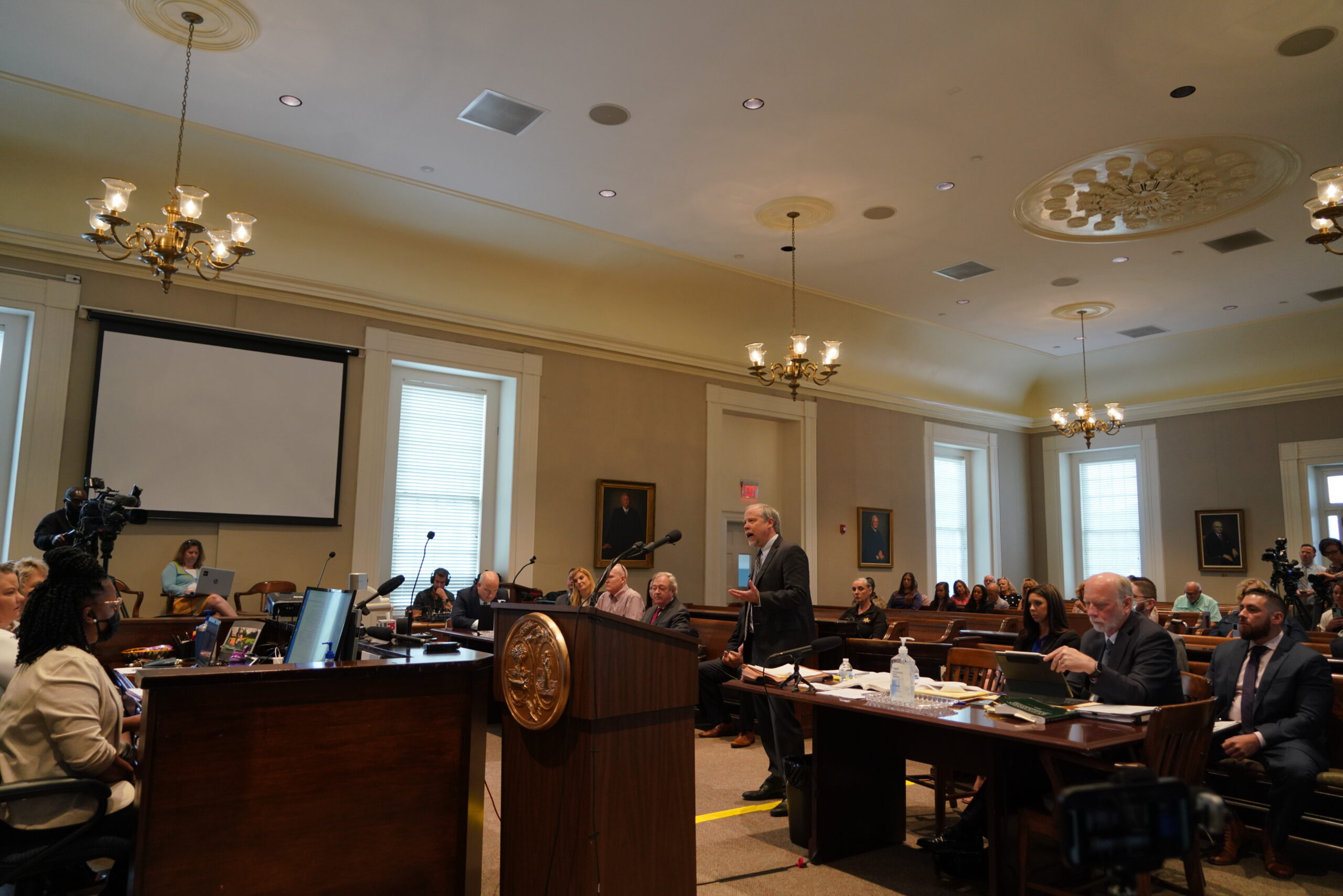 In keeping with his flair for the dramatic, South Carolina state senator Dick Harpootlian – the lead lawyer for disbarred attorney/ accused killer Alex Murdaugh – dropped a bombshell motion in Colleton County on Monday morning in connection with the ‘Murdaugh Murders’ crime and corruption saga.

Harpootlian’s paralegal Holli Miller walked the motion (.pdf) into the Colleton County courthouse less than an hour before a highly anticipated hearing in this case held before S.C. circuit court judge Clifton Newman – who is presiding over the criminal side of this saga at the state level.

Murdaugh has been charged with two counts of murder and two counts of possessing a weapon during the commission of a violent crime in connection with the June 7, 2021 shootings of his wife, 52-year-old Maggie Murdaugh, and younger son, 22-year-old Paul Murdaugh. Maggie and Paul were killed at Moselle – the family’s sprawling 1,700-acre hunting property next to the Salkehatchie River on the border of Colleton and Hampton counties.

He has pleaded not guilty to those charges and is tentatively scheduled to stand trial in January 2023.

Monday’s hearing – which I previewed here – revolved around allegations that the S.C. State Law Enforcement Division (SLED) and the office of S.C. attorney general Alan Wilson have been leaking information to members of the media related to the Murdaugh case. Specifically, to this news outlet.

Creighton Waters – the chief attorney for the statewide grand jury – had barely begun his remarks regarding a proposed protective order safeguarding the release of evidence in the case when Harpootlian leapt from his seat and objected.

“That is NOT what this hearing is about,” Harpootlian indignantly interjected, accusing prosecutors of concealing evidence from him and fellow defense attorney, Jim Griffin, of leaking information related to the case and of abusing the grand jury process in an effort to pin the blame for the murders on his client.

At one point during the hearings, a red-faced Harpootlian literally screamed to be heard on his motion to compel the production of evidence – accusing Waters of “hijacking this hearing.”

”They continue to try and hide the ball on this case,” Harpootlian said. “The attorney general continues to try and make this a star chamber event.”

Equally indignant in his response, Waters (above) fired back that all sides had agreed to a protective order regarding the production of evidence in this case until Harpootlian reneged on the deal at the last moment.

“Defense counsel was completely on board with this until after five o’clock on the day before discovery was due,” Waters told Newman. “They even edited the protective order and cleared it for submission to you.”

“This case is unique – it is unprecedented in South Carolina,” Waters continued. “This information is worth six or seven figures – at least one million to unscrupulous hands.”

”If not this case, what case?” Waters repeatedly said, referring to the need for such an order to be issued.

Newman (above) ultimately agreed to impose a blanket protective order restricting the release of any evidence provided by the state to Murdaugh’s attorneys – acknowledging Waters’ assertion that “the extreme sensitivity” of the information (and its potential value on the open market) necessitated the issuance of such a prohibition.

“This case cries out for the issuance of a protective order,” he said.

Actually, I disagree. If the concern is monetizing public files, I believe the evidence collected by the state in this case should be placed in full view of the public as soon as is practicable. After all, the gruesome crime scene photos taken at Moselle in the aftermath of the murders – and other ”extremely sensitive” information tied to this graphic crime – is going to come out anyway. Putting it on the record now and making it available to everyone eliminates the potential for ”unscrupulous hands” to profit from it.

Again, the issue isn’t whether potential jurors see this information – it is whether the information prejudices them against a particular defendant. If a juror affirmatively attests that any pre-trail publicity they have been exposed to does not prohibit them from rendering impartial judgment … they can still serve.

At one point in the hearing Harpootlian asked Newman to appoint what is known as a “special master” to supervise the state in “reviewing the documents … to make sure we get what we should get.”

Specifically, he recommended former S.C. chief justice Jean Toal for the job – although Newman declined to address this request in his remarks from the bench.

While the battle raged over how to handle the evidence in this case, another fight over the leaking of information to this news outlet erupted. Or rather “re-erupted.”

In his pre-hearing motion, Harpootlian laid the blame for leaks to FITSNews exclusively at the feet of Wilson – while absolving SLED and its leader, chief Mark Keel, of any culpability.


“Chief Keel runs a tight ship; he stopped any leaks from SLED over a year ago,” Harpootlian wrote in his motion. “The attorney general’s office is the only other possible source of these leaks.”

That’s a reference to this story published on July 15, 2021 – five weeks after the Moselle double homicide thrust this influential Lowcounty family and its legal/ political empire into the national (and international) limelight.

I do not concur with Harpootlian’s assessment. As I have repeatedly noted, both Keel and Wilson have “always worked aggressively and collaboratively to prevent leaks … which makes my job harder.”

Waters addressed the leak allegations during Monday’s hearing, saying “all leaks do is undermine our case and undermine the process.”

“The evidence should come out in the courtroom,” he said.

In an effort to prove his theory on the leaks, Harpootlian (above) asked judge Newman to call SLED agent Ryan Neill – one of the four agents he subpoenaed last week in connection with this case – to the witness stand to provide testimony.

“It will take only five minutes, your honor,” Harpootlian implored the judge.

According to Harpootlian, Neill – the lead agent on the investigation – was among the SLED agents who allegedly told Murdaugh’s family members last month that leaks regarding his impending arrest on murder charges had come from Wilson’s office.

“Some low-level attorney in the attorney general’s office leaked it,” Harpootlian claimed.

Waters acknowledged a ”disclosure” from his office but insisted the information was not related to any grand jury proceeding – or to the murder investigation – and that the source of the disclosure had been “addressed.”

Newman appeared satisfied by that explanation – and refused to allow Harpootlian to call Neill to the stand.

“I am not going to allow a witness for that purpose,” he said.

Harpootlian also railed on the alleged misuse of the statewide grand jury – which is investigating Alex Murdaugh on a host of alleged financial crimes, obstruction of justice allegations and his rumored role in a wide-ranging public corruption scandal.


“This is not a statewide grand jury case!” Harpootlian exclaimed. “This is a Colleton County murder case!”

“Murder is not an enumerated statewide grand jury offense – and I don’t know know if we want to pass a new law (to make it so),” Harpootlian added. “They’re not supposed to be investigating a murder case.”

According to Harpootlian, the grand jury “started with the boat case – a public corruption case.”

Waters countered that the statewide grand jury was statutorily authorized to share information in connection with county-level murder cases.

“There is a specific statute which allows the statewide grand jury to share information with county grand juries investigating other crimes,” he said.

The friction between the two attorneys boiled over at multiple points during the hearing, with Harpootlian throwing his pen across the desk at one point in exasperation.

“I don’t trust the state to honor the rules – they haven’t so far,” he exclaimed.

At another point during the hearing, Newman instructed the two bickering barristers to address him – not each other.

Harpootlian also railed at prosecutors for claiming their murder investigation of Murdaugh (above) was ongoing.

“They didn’t have enough (evidence) when they charged him?” Harpootlian asked, incredulously, citing the thirteen months which transpired between timing of the Moselle homicides last June and Murdaugh’s indictment on murder charges last month.

He also slammed Waters for referring to the case as a “game” at one point during the hearing.

“It’s not a game it’s his life – it’s justice,” Harpootlian said. “He wants this resolved so that SLED can go find out who really did this.”

Waters apologized for the remark, telling Harpootlian he knew it wasn’t a “game” – which is why he wanted to preserve the integrity of the evidence before trial.

As I noted repeatedly last week, Harpootlian has seized the initiative in this case in recent weeks – putting prosecutors and investigators on the defensive. Will he be able to maintain that momentum moving forward? We shall see …

Neoconservative Pawn? Or Did Nikki Haley Turn It Around On Her Critics?